See how this baby elephant interrupted a reporter's shot in the most adorable way outside an elephant orphanage in Kenya.

An adorable baby elephant stole the limelight from a young reporter as he tried to talk about human impacts on the environment at a wildlife rescue in Kenya.

Reporter Alvin Kaunda was surrounded by a few orphaned elephants at the Sheldrick Wildlife Trust in Nairobi when one of the babies got up close and personal.

"At first I felt the elephant trunk’s contact on my back but decided to keep going because I was doing my almost 10th take of my piece to camera," Kaunda told Storyful. "I wasn’t gonna let anything stop me."

Or so he thought.

Video shows the curious elephant moving its trunk over Kaunda’s ear, then the top of Kaunda’s head. Kaunda had to stop his filming again when the baby elephant "stuck its trunk in my mouth."

"It was actually my first time at the trust," Kaunda said. "I knew I was going to see the elephants but didn’t know that they’d let me so close to them."

According to the International Union for Conservation of Nature, increasing threats of poaching and loss of habitat have made Africa’s elephant populations more endangered in recent years. 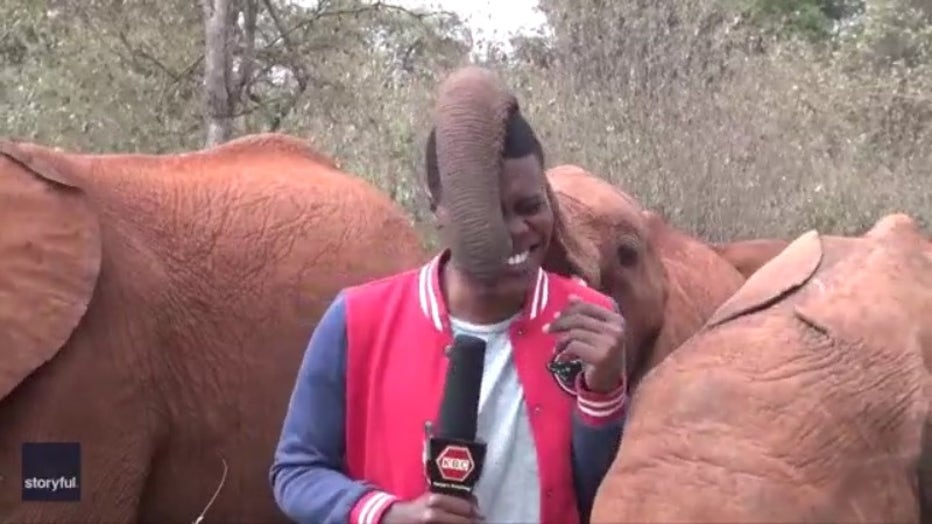 The African forest elephant is critically endangered, and the African savanna elephant is endangered. The two species had previously been grouped together as a single species and were classified as vulnerable by the IUCN.