A man is in custody after he allegedly shot and killed a University of Arizona professor at the main Tucson campus Wednesday afternoon.

In a news conference, University of Arizona Police Chief Paula Balafas said the suspect, 46-year-old Murad Dervish, was arrested by Arizona Department of Public Safety officers at 5:10 p.m. after a traffic stop near Gila Bend. 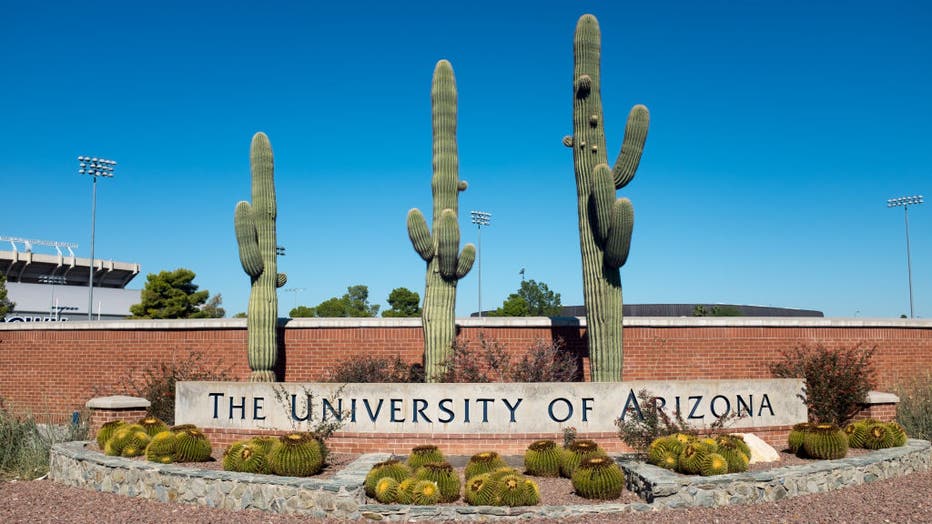 A sign in front of some cacti mark one of the entrances to the University of Arizona, in Tucson, Arizona. The University was founded in 1885 and was the first university in the Arizona Territory. (Photo by Epics/Getty Images)

Balafas said the department received a call around 1:59 p.m. reporting Dervish, a former student, was in the John W. Harshbarger building. He was reportedly not allowed in that building, and the caller wanted him escorted out by law enforcement.

While police were en route to the building, officers received two separate reports around 2:06 p.m. of a person shot inside.

The shooter was then seen running out the main doors of the building and away from the scene.

Balafas said the Tucson Fire Department arrived at 2:13 p.m. and transported the victim, who was identified as a male professor, to Banner University Medical Center. He was pronounced dead in the emergency room.

"This incident is a deep shock to our community, and it is a tragedy," Robbins wrote. "I have no words that can undo it, but I grieve with you for the loss, and I am pained especially for Tom’s family members, colleagues and students. I encourage you to have compassion for one another and to care for yourselves and those around you during this difficult time."

Meixner grew up in Rockville, according to his faculty bio, and attended the University of Maryland College Park.

Limited details are available about the shooting, but police said it happened in an office. The relationship, if any, between the professor and the shooter was not disclosed.