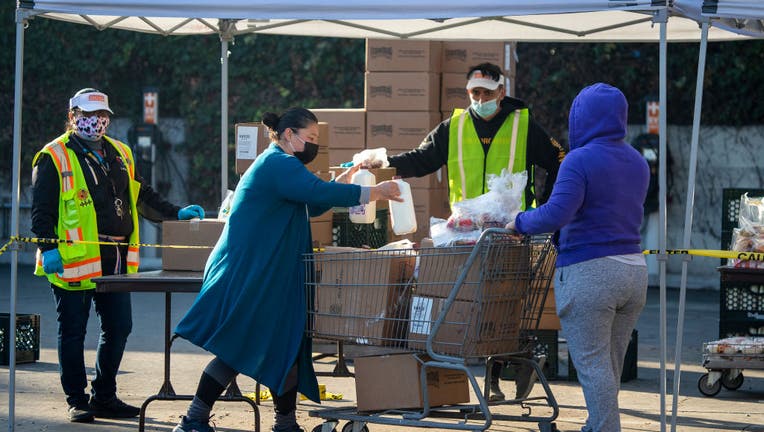 FILE - Women load up a shopping cart of free meals after waiting in a long line of people walking in, which was in addition to a line of cars that wrapped around several streets in South Gate, California.

LOS ANGELES - Nearly 1 in 10 Americans did not have enough to eat last week, according to data collected by the United States Census Bureau.

As people continue to lose jobs in a crippled economy during the ongoing COVID-19 pandemic, the uncertainty of providing food for a full household only adds to the stress.

Data collected by the U.S. Census in late October and early November saw a drastic increase in people reporting food insecurity compared to before the pandemic.

Food insecurity has been an ongoing issue in the U.S., even before the COVID-19 pandemic, but the problem was not nearly as severe before the virus hit the states.

According to the Brookings Institution, a nonprofit public policy organization, food insecurities among households were actually on a downward trajectory prior to the onset of the pandemic.

But then the virus struck. The economy was largely shut down in a bid to slow the spread of the deadly disease, and more and more families were unable to keep their cupboards stocked.

“Indeed, the loss of a job or income, as well as unstable child care arrangements are associated with the onset of food insecurity. The downturn instigated by the COVID-19 pandemic is also likely to increase food insecurity even more: the loss of child care, as well as meals provided at free or reduced cost at school and social distancing guidance that restrict movement outside the home,” according to the Brookings Institution.

Around the country, contact tracing and isolation protocols are sidelining school employees and closing school buildings. The school staffing challenges force students out of classrooms, even in districts where officials say the health risks of in-person learning are manageable.

Despite the hope of several valid vaccines on the horizon, the ability to go back to life as normal and provide for one’s family remains as a looming worry for millions of Americans.

Pfizer applying to FDA for Emergency Use Authorization of vaccine

Dr. Mike Cirigliano, of the Perelman School of Medicine at the University of Pennsylvania, talks with FOX 29 Philadelphia's Thomas Drayton about the latest COVID-19 vaccine news.

Another COVID-19 relief plan has been stalled in Congress, and the crisis is compounded by the prospect of nearly 12 million Americans potentially losing their unemployment benefits the day after Christmas, according to The Century Foundation.

The infections have led to a shortage of hospital beds and health care workers, and they threaten non-COVID-19 surgeries and other critical care.

On average, the U.S. is recording over 172,000 new cases per day and seeing more than 1,500 deaths per day on average — the highest level since May.