WASHINGTON (FOX 5 DC) - Here we go again! Another storm system is expected to overspread the D.C. region with snow, sleet, and freezing rain all in the forecast for the region on Thursday. 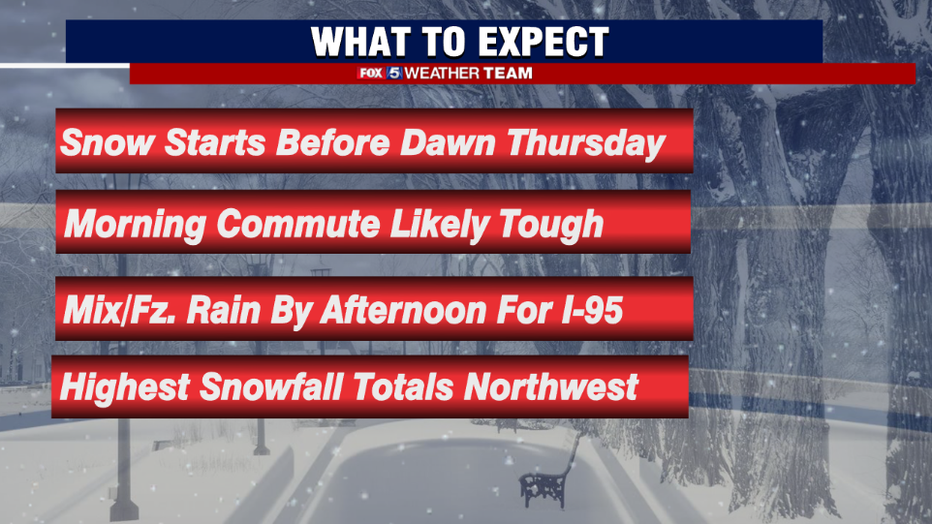 Mike Thomas has the FOX 5 Weather forecast for Thursday, February 18

The warnings are in place around D.C. and to areas to the northwest due to the threat for 5" or more of snow, while down to the southeast across southern Maryland and the Northern Neck of Virginia, the watches are mostly in place due to the threat of over 1/4" of ice. 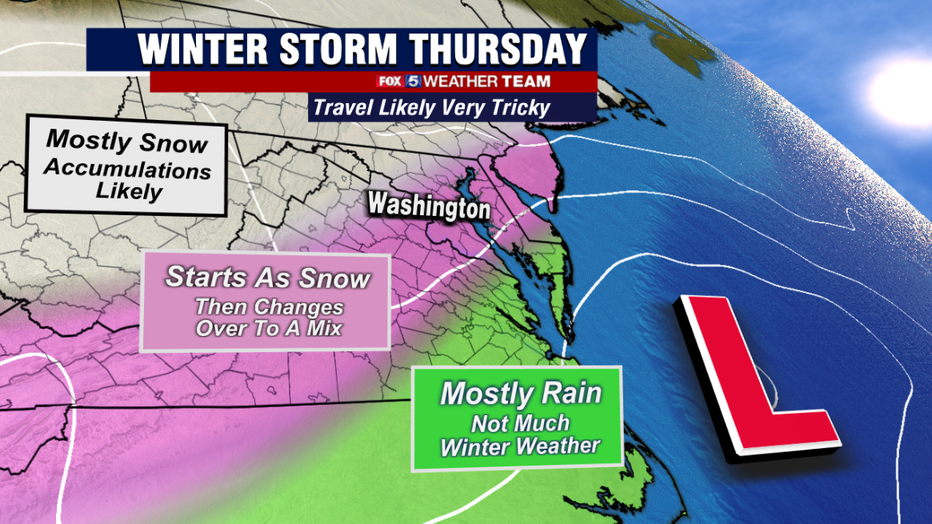 Cold air is expected to be plentiful at the surface, in fact, temperatures are not expected to make it too far above freezing (if they do at all) here in Washington, D.C. tomorrow.

The tricky part of the storm will be warm air sneaking in aloft, enough so that we are expected to still see a transition over to sleet and freezing rain for most of the immediate metro region at some point between the late morning and early afternoon hours tomorrow.

Similar to many of the winter weather events this winter, this is likely to have a negative impact on snowfall totals across the area.

Snow is expected to start pushing into the region during the overnight hours tonight. Starting in far southwest areas after midnight and spreading across the areas to the northeast through the sunrise hours tomorrow morning.

We do expect that most zones will likely start off as a period of snowfall, including southern zones like the Northern Neck and Southern Maryland.

Thursday's commute is expected to be tricky if not dangerous in many locations, so those who have the ability to work from home and sit it out, it is certainly recommended. 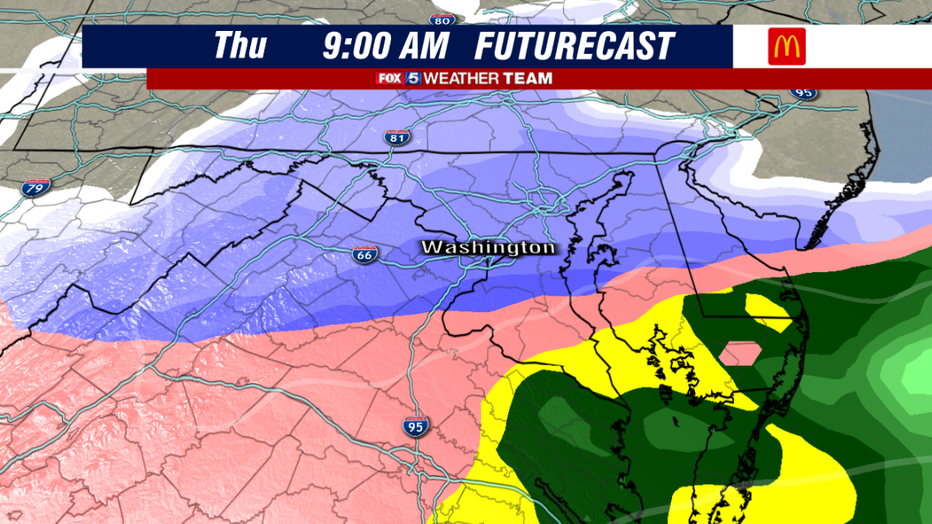 By the middle of the morning as the storm system strengthens, warm air is going to start to sneak into the picture in the middle levels of the atmosphere.

This will start to transition snow to sleet and freezing rain across our southern zones, where freshly fallen snow could get layer of solid ice developing on top of it.

Moderate to heavy snow may continue for areas north of I-66, with heaviest accumulations likely focused where they normally are, to the northwest of town. 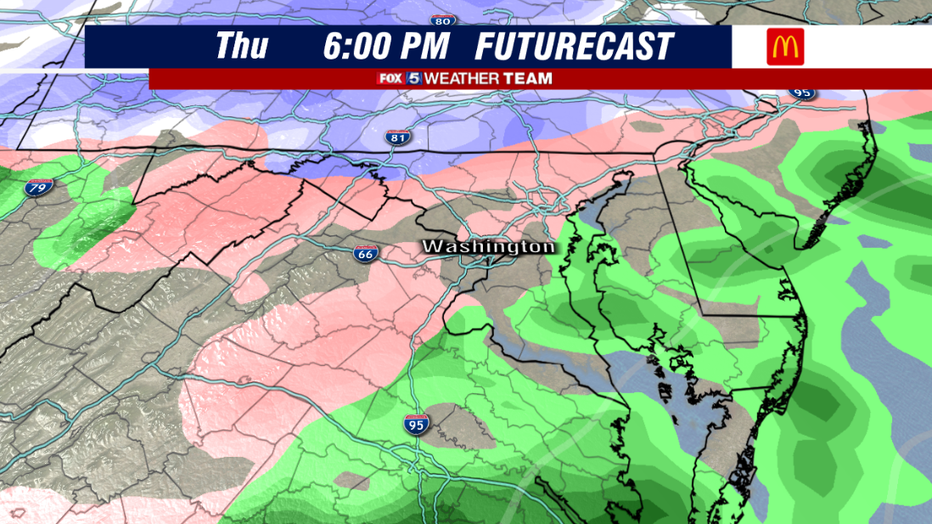 As we head into the afternoon and evening hours, precipitation will lighten. This will allow the middle layers of the atmosphere to warm enough that the snow/sleet line should push up to the northwest.

The million dollar question, as it has been all winter, is just how far to the northwest this line will reach. Latest model projections do seem to indicate that it could reach as far north as the Mason-Dixon Line by the early evening hours. 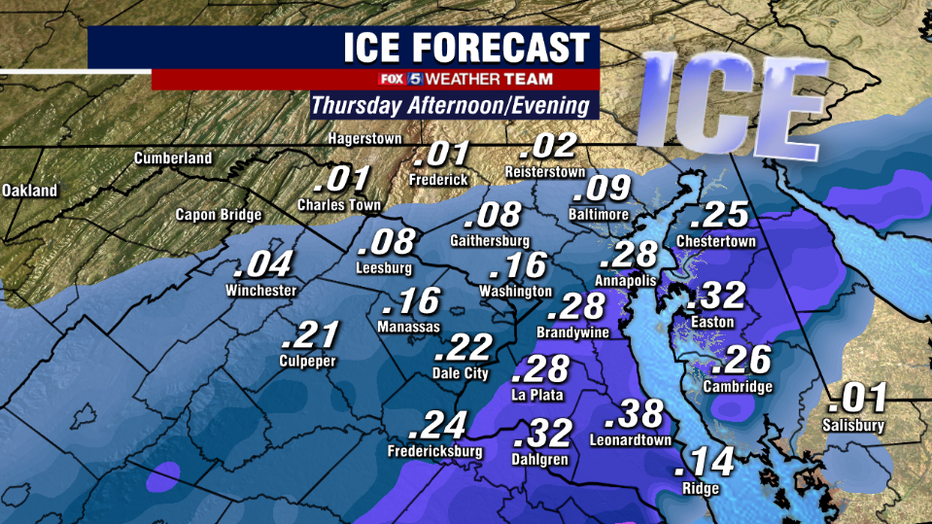 Indeed, the focus with this system has primarily been the snow, but threat for significant icing will be there as well.

This is particularly true for those across Southern Maryland and the Northern Neck where the freezing rain could be steadier during the morning hours. While snowfall amounts are not expected to be overly impressive in these areas, ice could cause just as much if not more travel issues in these areas.

Trees covered in a little snow with more ice could become weighed down and we could see some issues with downed branches and powerlines in the region.

Please exercise caution if traveling tomorrow if you have to do so, even if it appears to be just rain coming down. Freezing rain can be very deceptive like that. 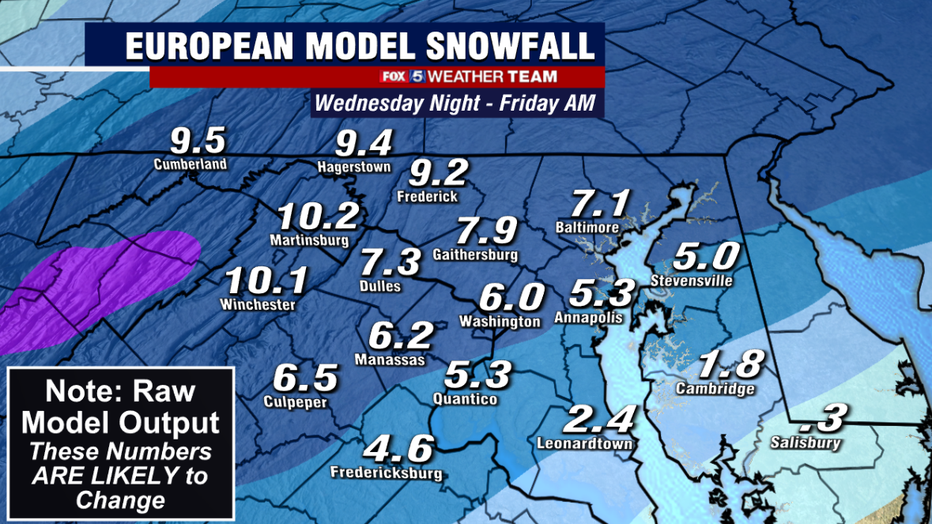 As far as snow, it has been interesting to see the models have remained pretty consistent over the past 48 hours in a winter that has often brought major swings.

Guidance has consistently been in the 4-6" range here for downtown Washington but this is likely to be a little aggressive given that the snow will have a high liquid ratio.

This means it will be ideal for making snowballs, but also that it will easily compact on the ground. So what might typically by 2" of fluffy snow, would just be 1" of wet compacted snow. 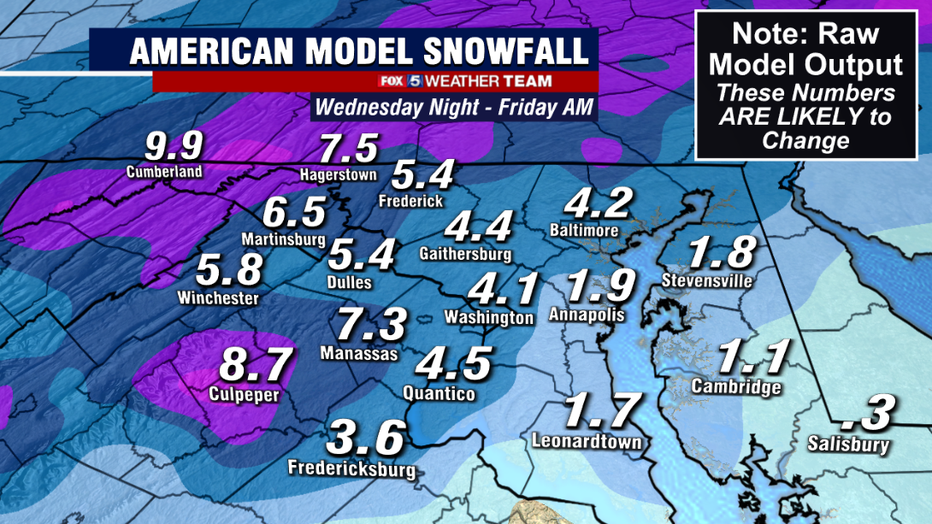 The key to it all is going to be the rain/snow line and just how fast it starts pushing off to the northwest. If we start mixing sooner than expected here in Washington, it will significantly impact our snowfall totals.

As of this morning, all of our computer guidance is saying this will not happen until at the earliest, later in the morning.

But several times this winter this changeover has happened faster than expected. If this happens to be the case, snowfall totals will come in might lighter than forecast once again. 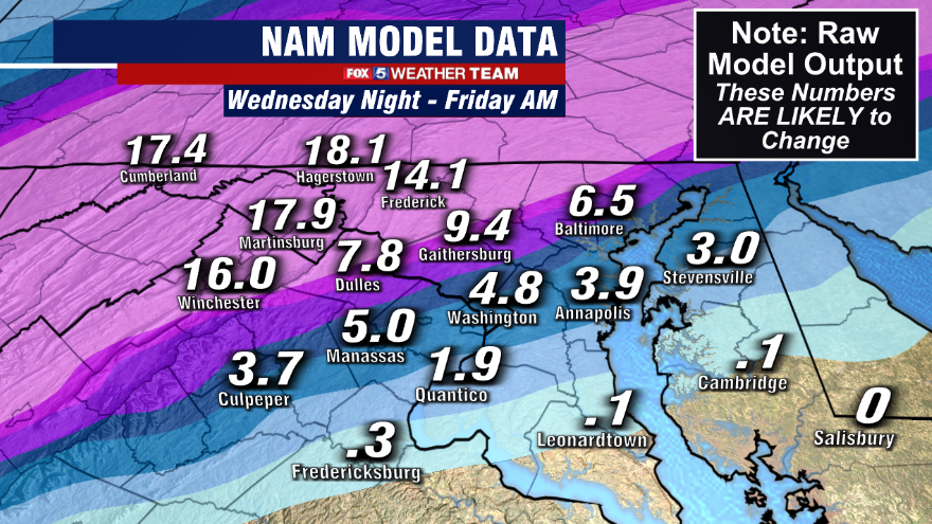 Some models, like the north American model above, are extremely aggressive with snowfall totals in northern Maryland and the West Virginia panhandle.

While these locations are expected to see the most snow, all indications this morning are that snowfall totals exceeding a foot of snow will be confined to the mountains and the highlands to the northwest.

We think the model is being a little aggressive with 15"+ amounts in locations like Frederick, Hagerstown, Martinsburg, etc. While these locations are some that should see the most snow out of this event, we believe totals in the 6-12" range are more likely in these zones. Areas exceeding a foot should be more isolated. 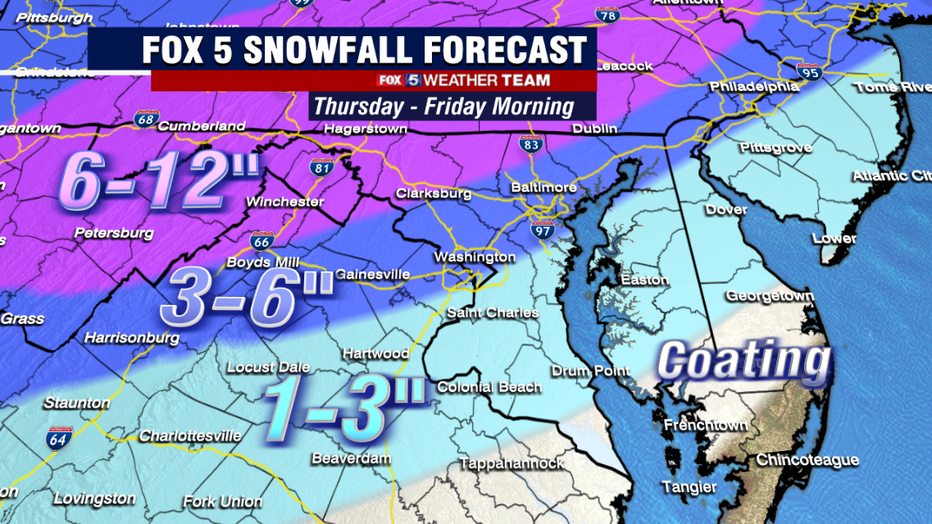 Our forecast for this event take into account both the latest morning guidance as well as lessons learned from previous storms so far this winter.

We believe a reasonable range for the D.C. metro area is around 2-4" before a change over occurs. In classic winter storm fashion here in the Mid-Atlantic, the highest snowfall totals are going to be where the air will stay coldest the longest, and that is in the northwest zones.

Southern zones will still get some snow, with a general 1-3" expected. But they will also be the first to transition over to sleet and freezing rain. These zones will be at the highest risk for icing through, which will remain a concern throughout the day tomorrow.

The worst of the storm will be during the morning hours of Thursday. Be sure to tune in to FOX 5 all morning long as we get you through what is likely to be one of the more impactful winter storms of this season.

By the afternoon hours, precipitation likely remains, but we're unlikely to add all that much more to snowfall totals as it will lighten up. It will be a perfect day to utilize the free FOX 5 Weather App through, so give it a download and track the storm with us all day Thursday.