BETHESDA, Md. (FOX 5 DC) - Ian became the fourth hurricane of the 2022 Atlantic hurricane season as of Monday morning, with winds in excess of 100 mph and strengthening as of 5 p.m.

After a quiet start to the hurricane season that only saw three named storms prior to the fourth of July, and no named storms in August, the Atlantic has exploded with activity through September with six named storms this month.

Fiona hammered coastal Canada over the weekend and has so far been this season's strongest hurricane, peaking at category four strength with winds of 130 mph. All indications are that Ian may have the ability to eclipse that with the National Hurricane Center forecasting sustained winds peaking around 140 mph in the days ahead. 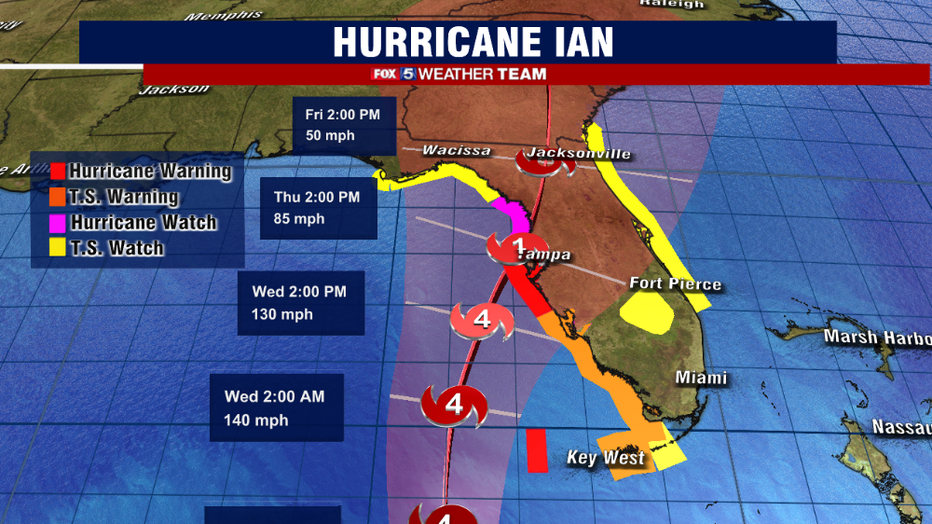 Hurricane warnings, meaning hurricane conditions are expected within the next 36 hours, were issued for the entirety of western Cuba Monday morning.

To prepare for the weather, evacuation orders were issued for some Florida residents.

While at this time the National Hurricane Center has the storm peaking in strength as a category four with winds around 140 mph, it is forecast to weaken as it approaches the Florida coastline.

A strong upper level trough over the eastern United States will begin to influence the storm, with the storm jetstream winds having a negative impact on the storm structure.

While this is good news for getting the storm to weaken, the issue is that it is also expected to drastically slow the storms forward speed.

With the storm just off the western coast of the state, strong southwest winds around the storm will be pushing Gulf of Mexico waters right up against coastal Florida, leading to major storm surge concerns — especially in areas like Tampa Bay, where some of the worst surge is expected.

In addition, heavy flooding rains and thunderstorms are expected. 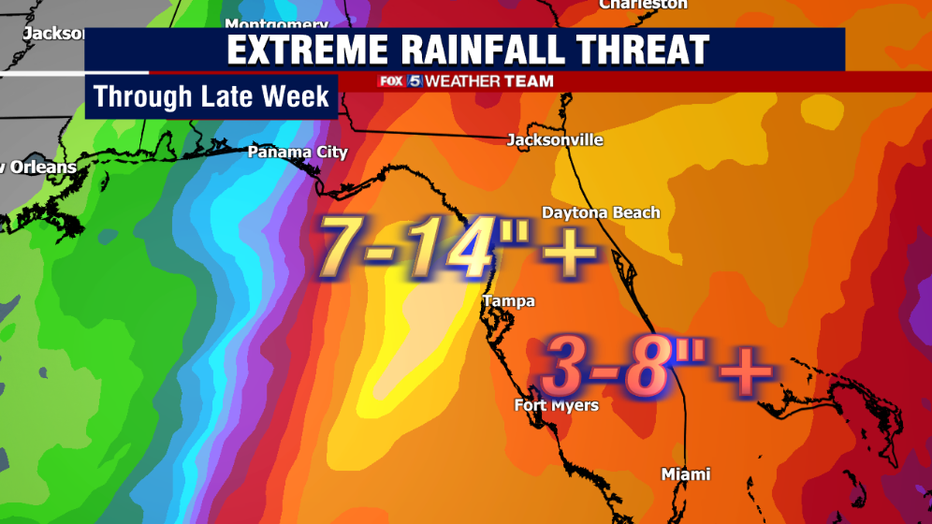 The National Weather Service is warning that a wide portion of northern and central Florida could pick up between 7-14" of rain or more as the storm slowly pushes inland. Flash flooding will be a major concern, especially as the forward speed of the storm slows.

As with all tropical systems, the additional rotation in the atmosphere also poses the risk of severe weather and tornadoes.

Waterspouts come ashore as tornadoes are very common in the outer bands of these hurricanes. Residents throughout Florida will need to stay on guard for severe weather as the system approaches. 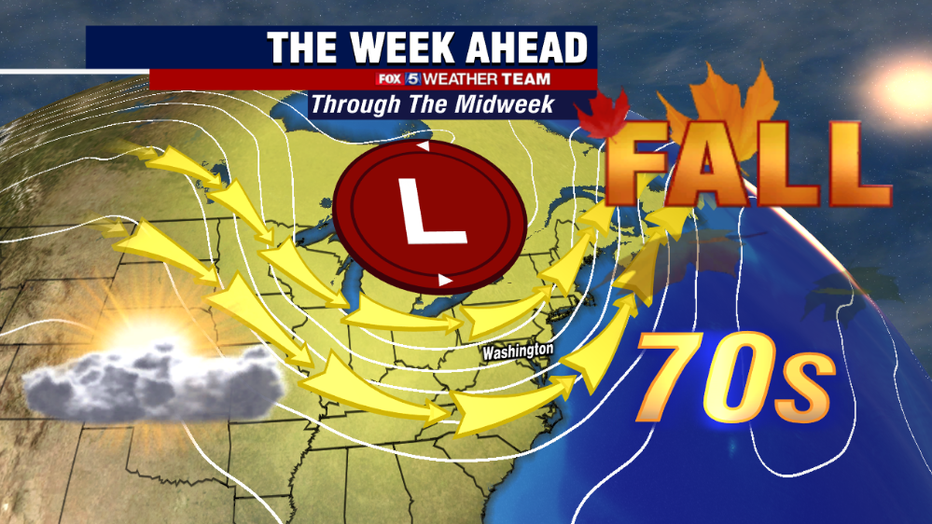 Upper air trough over the eastern United States will keep the weather quite pleasant in the Mid-Atlantic to start the week.

For those of us in the Mid-Atlantic and the Washington, D.C. region, we will remain shielded from any ill-affects of the storm through the first half of the week, thanks to a strong upper-level trough over the eastern half of the country.

This dip in the jetstream will continue to provide our region with a comfortable flow of dry Canadian air, making for some very nice fall weather.

Mornings are expected to start cool in the 50s, while warming pleasantly into the 60s and 70s each afternoon. While occasional cloud cover is possible, we are not expecting any rain in the region through the end of the workweek. 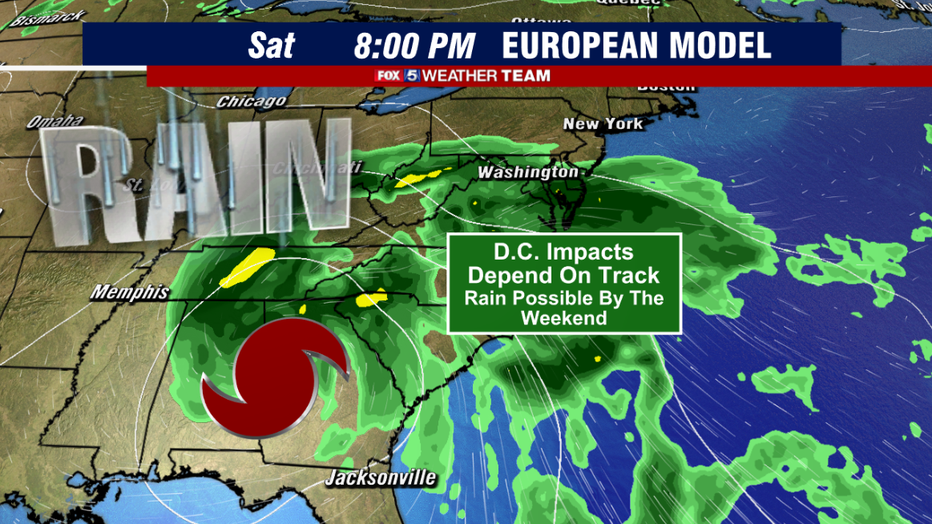 European model projections suggest that rainfall from Ian could impact the D.C. region by the first half of the weekend.

This does change by the weekend.

The trough will begin to vacate the region, which will make room for Ian – at that time it's likely just tropical remnants will come northward.

The speed with which the trough will exit is still a matter of model debate, but several models indicate that the first waves of tropical rain from Ian could approach our region by Saturday.

Some other models show it holding off until Sunday. There are still a number of factors that need to be worked out in the days ahead that will determine when the storm will actually arrive.

Those with weekend plans should keep a very close eye on the forecast though, as there is the risk that the weekend could turn into a washout. 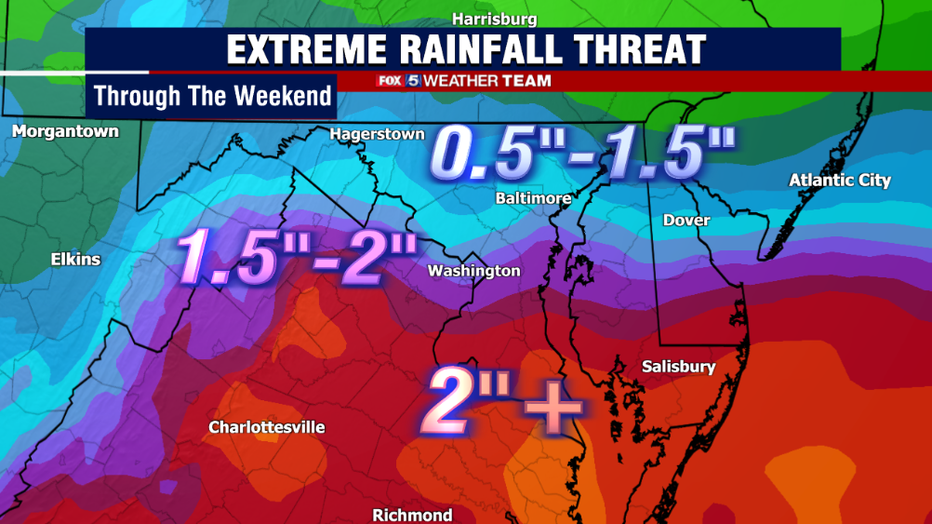 Early weekend rainfall projections from the National Weather Service. These are likely to change in the days ahead. Stay tuned for updates.

Early projections from the National Weather Service have the highest chances of the D.C. region dealing with Ian's leftovers during the Saturday to Monday timeframe as we welcome the month of October.

While the wind field from the storm would be significantly reduced and likely not much of a threat for damage, heavy and potentially flooding rains would definitely remain a major concern.

The reason for this is we will have a strong, cool and dry air mass settled in over the Northeast, while Ian would be forcing humidity and tropical moisture northward.

This puts the Mid-Atlantic in a "collision zone" between these two air masses, where moisture often pools and rainfall can be enhanced.

Early projections from the National Weather Service suggest that parts of our region have the potential for over 2" of rain. We would need to be on guard for flooding concerns if this is the case.

FOX 5 will continue to update you on the latest on Hurricane Ian's forecast track and its potential impacts on the Washington, D.C. region throughout the course of this week.

Stick with your FOX 5 Weather Team for the absolute latest!