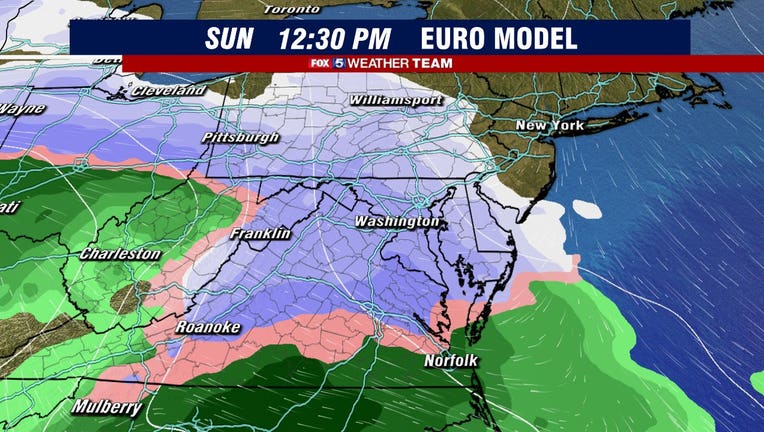 WASHINGTON (FOX 5 DC) - Thursday marks not just the fourth day of the workweek, but also the fourth day in a row that all the major weather forecast computer models are showing the threat for measurable snow in the Washington, D.C. region to end the weekend. Consistency is important in the world of weather forecasting, which is one of the reason that the storm has been all the buzz on social media recently.

How much snow? Devil in the details for possible winter storm Sunday and Monday

All eyes are on a potential winter weather threat that could bring snow to the D.C. region Sunday and Monday.

As with every storm though, the devil is always in the details...and each individual weather model is showing its own unique scenario to how we get the snow, which is important because each scenario presents the potential for different snowfall amounts. So will it be light snow, or will it be heavy snow early next week? Download the FOX 5 Weather App

Confidence was high enough as of yesterday that the National Weather Service placed our entire region at an "enhanced risk" for impactful winter weather on Sunday and Monday. "A cold wedge east of the Appalachians will set up the atmosphere in which a large part of our area should see, at least, some accumulating snowfall late Saturday night through Monday" the National Weather Service warned in their outlook this morning. "The question is where in our forecast area. The other question is how much snow. Confidence decreases on timing, strength and amounts once we get into midday Monday and thereafter."  Download the FOX 5 Weather App

That question into how much has been the one on everyone's mind over the past couple of days. Images have been circulated on social media showing anywhere from a few inches to a few feet of snow. The answer should become more known in the days ahead.

The upper atmospheric energy that will create this storm system hits the West Coast on Friday, which is the typical time frame that weather models start to lock in on a solution. It is what solution they decide to lock in on that will matter the most for potential snowfall totals. 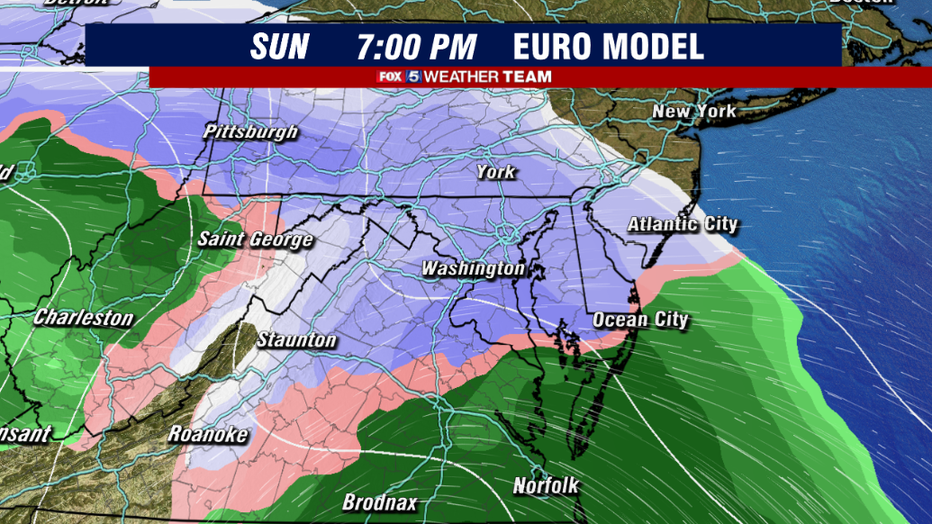 Lets talk about what models are starting to agree on first, and that is Sunday. While the timing details still need to be worked out, just about every weather model we have as what we call an "overrunning" snow event across the DC region at some point on Sunday.

This is when moisture initially pushes into our region out of the south. With cold air entrenched in the region through the day on Sunday, this event is expected to initially start as snowfall that will stick rather quickly after what will be a very cold end of the week in our region. A few inches of snow are expected by Sunday evening. Its the second part of the event, the Monday coastal storm, which is where most of the questions come in. Download the FOX 5 Weather App

The key to is all is how the upper level energy develops over time as it pushes across the country and into the eastern United States. A feature known as a "closed upper low" is expected to develop, but the location and strength of its development is absolutely key to how much snow our region could potentially get early next week. 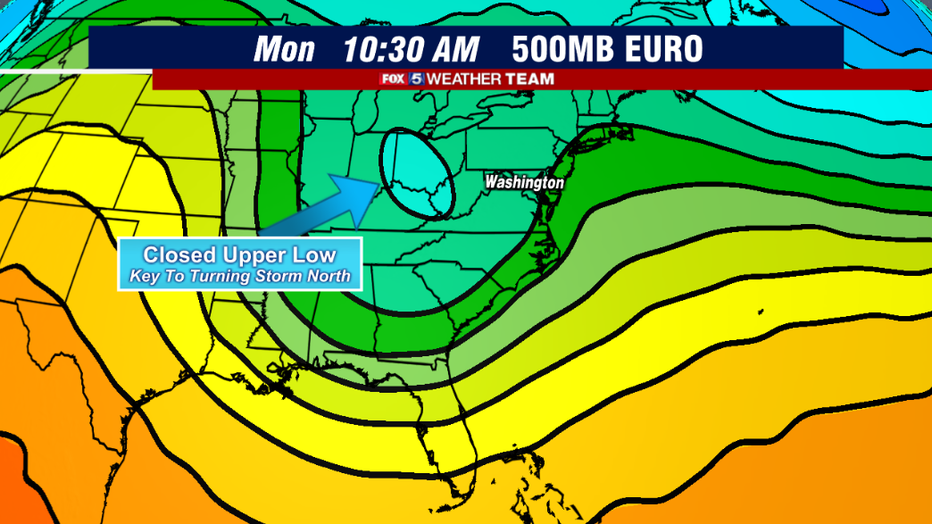 Lets examine the famed European model, which shows a closed and depending upper level low pressure system rolling across the Midwest early on Monday morning. It strength and location will be key to where the surface low will develop on Monday, and whether or not it will track closer to the coastline or farther out to sea. 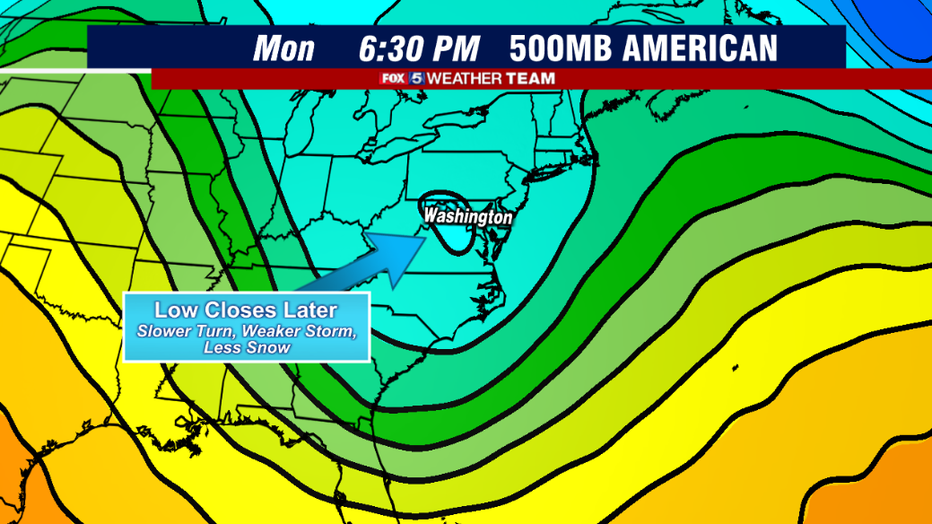 Compare this to the latest American model, which is also showing the closed low but much later in the day on Monday and much farther to the east. Why is this important? Because it is this upper low that will be steering and strengthen the storm system at the surface. 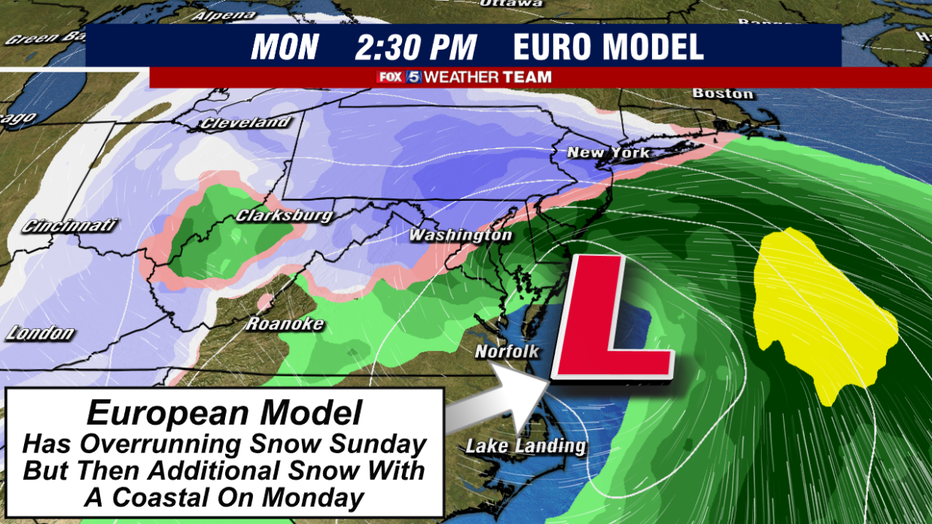 If the low pressure system closes farther back to the west like the European model shows, the subsequent coastal system will develop farther to the south and get pulled northward into the cold air entrenched across our region on Monday, leading to a more impactful system. As is typical with most coastal systems, where the rain/snow line would set up would be key to who gets what snowfall wise. But the European has been very persistent on showing this type of scenario over the past few days. 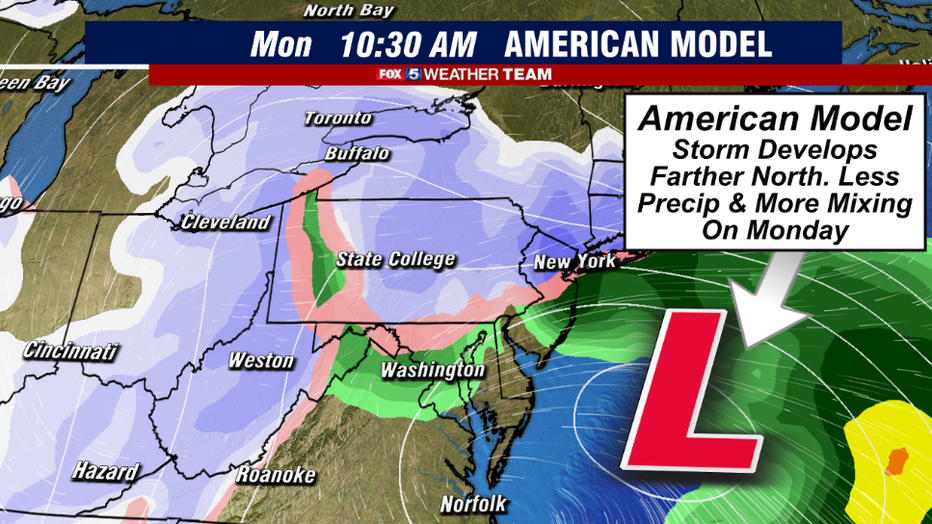 By contrast, the closing of the upper low farther to the east on the American model results in  a surface storm that strengthens both farther north and farther off the coast than its European counterpart. Because of this, the worst of the snows with this scenario fall well off to our north, across New York and southern New England, which we may get some light rain, mix, or snow on the back side as the storm pulls away on Monday. Download the FOX 5 Weather App 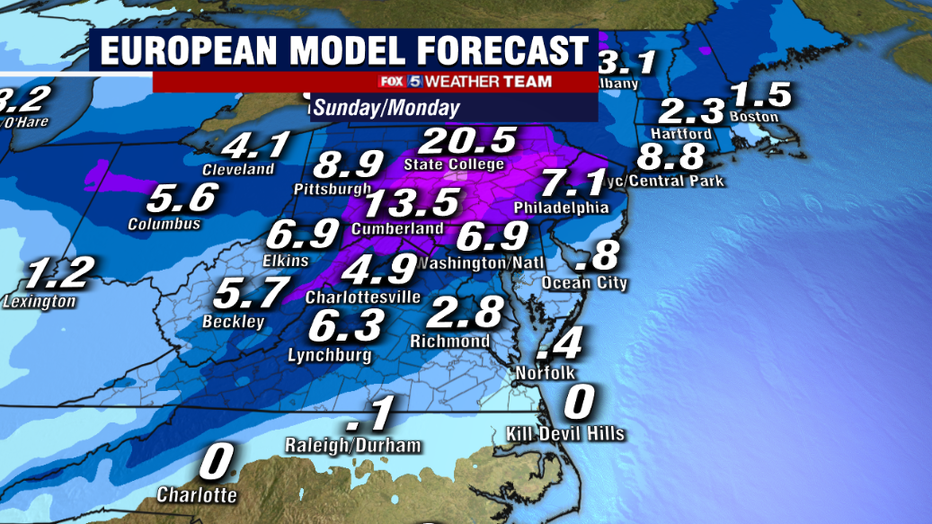 The differences are clearly seen in the forecast snowfall amounts. The European has more of the classic winter storm look, putting down the potential for over half a foot of snow here in Washington, DC by the time the event wraps up Monday night. Highest totals would be northwest of DC with the threat for some getting over a foot of snow in those areas, similar to the December storm that impacted our region just before Christmas. Download the FOX 5 Weather App 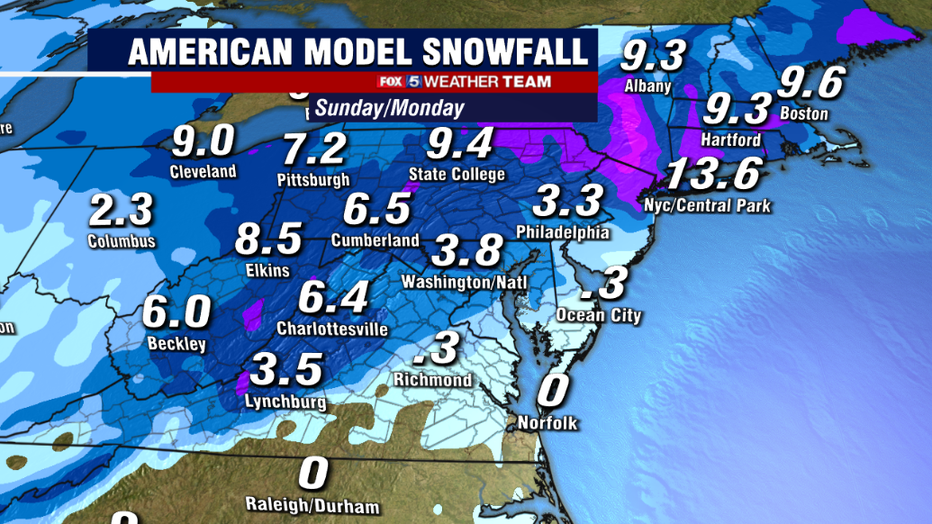 If the American model ends up being the correct, then most of the snow that falls will actually fall on Sunday, with very little being added on Monday. You can see the major difference that something seemingly so simple as an upper level low could cause though, with the American showing only about half of what the European is showing snow total wise.

What is true is that regardless of which model ends up being correct, both are still showing the more snow than downtown Washington has seen in a couple of years. In fact, Reagan National has not seen over an inch of snow since February of 2019. New data is coming in daily, so make sure you keep it tuned to Fox 5 for the latest from your weather team as the risk for impactful winter weather continues to rise this weekend. We will keep you updated every step of the way!