Wednesday is the 10-year anniversary of a night many in the D.C. region will never forget -- the June 2012 north American derecho.

WASHINGTON - It's hard to believe it has already been a decade since one of the most destructive thunderstorm complexes, not just in D.C. history, but in North American history, impacted our region. It was an event that those who rode through the storms that late June Friday night in the summer of 2012 will not soon forget.

It had such an impact on our region that just the mention of the word "derecho" brings back fears of hurricane force winds, widespread power outages and thousands of trees down. So extreme was this event, that many forecasters are hesitant to use the word when forecasting in our region because of what many believe a derecho event is like.

The D.C. region is marking 10-years since the powerful and destructive derecho moved across the D.C. area. Video taken from inside the Jefferson Memorial in June 2012 shows the powerful storm as it tore through the region. The storm knocked out power to millions of people in D.C., Maryland, and Virginia and was one of the deadliest and most destructive fast-moving severe weather events to strike the area.

So what exactly is a derecho? In simple terms, is a widespread, long-lived wind storm that is associated with a band of rapidly moving showers or thunderstorms. It must meet certain criteria, traveling at least 240 miles with wind gusts exceeding 58mph throughout the majority of the storm's duration.

A derecho event is actually not as rare as you might think, with one occurring in the D.C. region on average once every 4 years according to the National Weather Service. However, the vast majority of them are not anywhere This is because it became a buzzword during the 2012 event., which was an extreme event even by derecho standards. In fact, the D.C. region typically sees a "derecho' event every 2-4 years. However, the 2012 event was the first time that many in our region heard the term derecho, and thus many believe every derecho is like that.

This is not the case. The June 2012 case was near the top of the scale as far as derechos go, one of the most powerful in North American history. What made it this way? 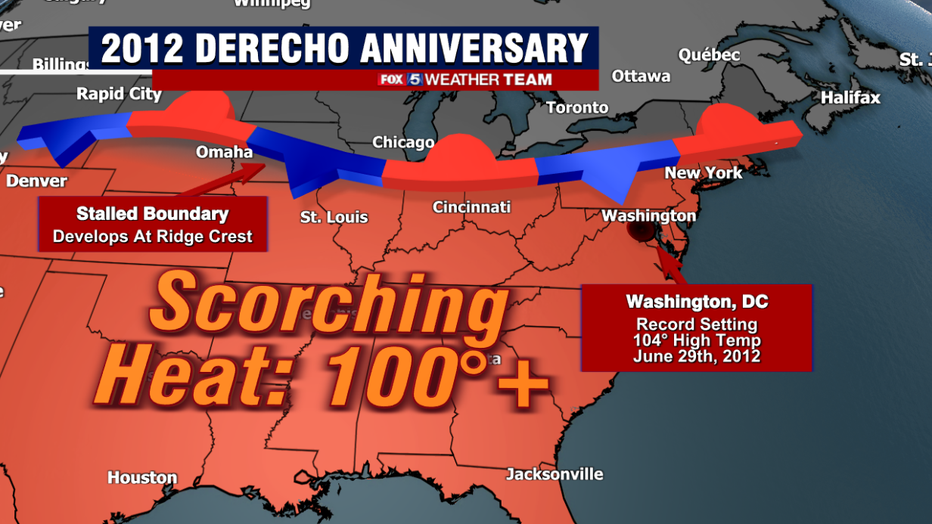 Well historic storms often have their root in historic heat, and the summer of 2012 was one of the hottest on record for the United States. For late June and much of July, the country was held under the grip of a persistent area of high pressure, often referred to as a heat dome. This one was particularly powerful and impactful for our region.

Between June 28th and July 8th, D.C. had 11 straight days of high temperatures exceeding 95°, and during which the mercury broke triple digit levels five times. The hottest of which was 104°, a record-breaking high temperature for June 29th and the day that still stands as the hottest June temperature on record in D.C. on record.

It was not just temperatures either, but dew points were in the upper 70s to near 80°, making for an extremely moisture heavy, and unstable atmosphere over our area. 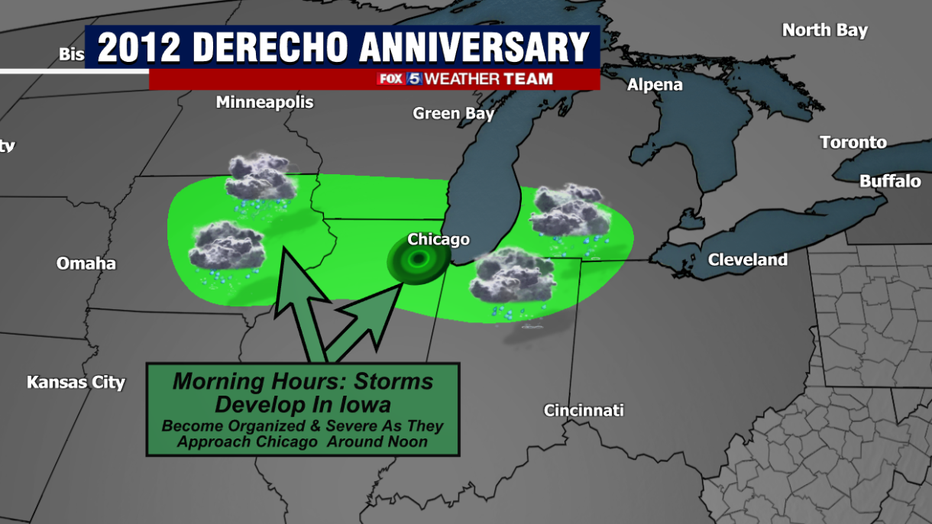 The day began quite and filled with sunshine here in Washington, D.C. as temperatures quickly climbed through the 90s and into the 100s. In Iowa, a cluster of relatively mundane thunderstorm started to fire over some farmlands in the eastern half of the state.

These storms were located along a stalled boundary that divided the hottest and most humid conditions from an air mass that was plenty hot, but a lot drier in nature. This boundary acted as an area of enhanced lift in the atmosphere, which the storms tapped into as the drifted eastward. By the lunchtime hours, they had clustered into a complex of severe thunderstorms known as an MCS, or mesoscale convective system.

This systems rapidly intensified as it left Illinois and began to form into the early signs of the derecho it would become as it entered Indiana. Winds out of the storms gusted to 91mph as the storms passed through Fort Wayne, IN during the early afternoon. By this time, the storms had achieved a forward speed of nearly 60mph, which they would hold onto through much of their duration as the storm complex continued to expand to the southeast. 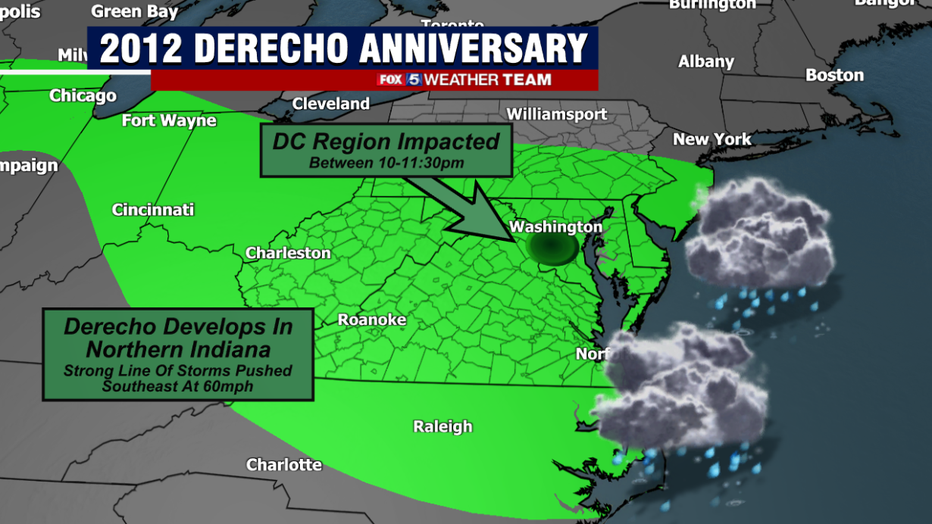 As the storms blew through Ohio during the late afternoon, they tore through neighborhoods with winds gusting to over 85mph in many locations. At its peak, the storms caused the most widespread power outages ever recorded in Ohio history. Nearly two-thirds of the state was without power at one time, over one million homes in total.

But the destruction was not done yet. As sunset approached, the powerful storm ripped into the West Virginia highlands, knocking out power to 672,000 homes and downing thousands of trees. The mountainous terrain caused difficulties with repairing the damaged power infrastructure in the state, with many customers without power for 1-2 weeks after the storms ended.

National Weather Service radar loop of the 2012 Derecho Impacting the DC region on the night of June 29th, 2012

Many expected that the Appalachian Mountains, combined with the loss of the sunlight would help the storm to weaken as they moved into Maryland and Virginia. However, despite being several hours after sunset, temperatures in many locations were still very hot, with many near 90° coupled with very high humidity. Though not at Fox 5 at the time, I still remember standing outside my parents home on that June night and remembering just how heavy the air felt, as if for a night we were in the swamps of Louisiana.

Due to these high levels of instability at such a late hour, the storms retained their strength as they continued their destructive eastward march to the sea. They arrived in the immediate DC area as the 11pm hour approached, with their intensity catching many off guard for that late at night.

Winds gusted to over 70mph at both Reagan National Airport and Dulles Airport, with 66mph winds reported at BWI in Baltimore. It was a wall of nearly hurricane force wind gusts that swept quickly across our region, but the damage it left in its wake it what made it so memorable. 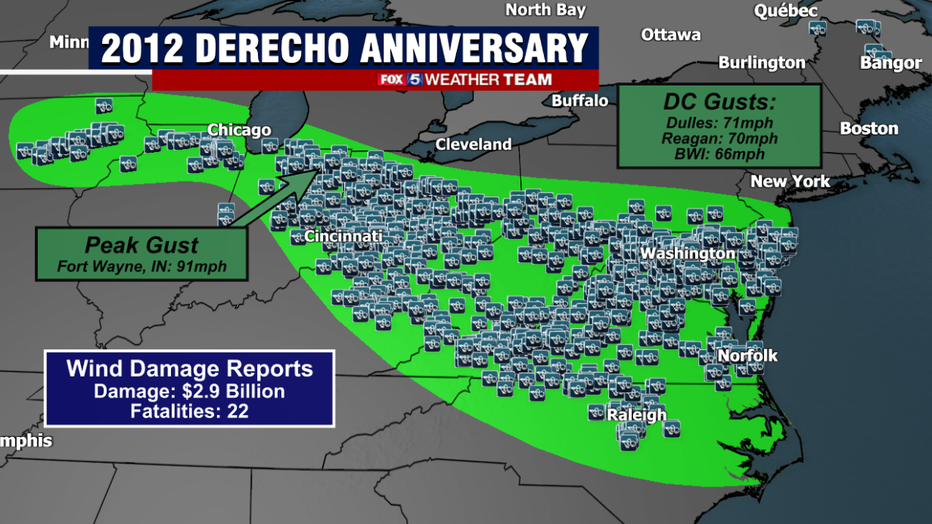 The 2012 derecho is not just remembered because of its power, but more so for the extent of it's destruction. The derecho was one of the longest track thunderstorms complexes in American history, tracking for over 800 miles. In that journey, it caused nearly $3 billion worth of damage, knocked out power to over 4 million households between the Midwest and Mid-Atlantic, and caused the deaths (direct or indirect) of 22 people.

Nearly 68,000 people woke up without power in D.C. on June 30th. Over a million outages in Virginia made it the largest, non-hurricane power outage in the state's history, while 1.6 million Maryland residents woke up in the dark. Thousands of trees were downed across the region, with nearly 5000 tons of storms debris being removed from Montgomery County, MD alone.

Many went without power for nearly a week as cleanup efforts got underway. This created additional concerns with the persistent heatwave.. DC hit 98° the day after the derecho.

Thankfully, our region has not experienced anything close to the scale of that derecho event since that sweltering summer of 2012. It was an extreme, powered by extreme heat and humidity the likes of which we do not often see in this region. That summer, 2012, was actually the last time as of the writing of this article, that DC has hit 104° or greater.

In fact, the city has not seen a 100°+ day since the summer of 2016. Residents will always remember that storm system though, and the word "derecho" will now forever be associated with it and compared to it in our area, for many decades yet to come.