WASHINGTON - At a glance: 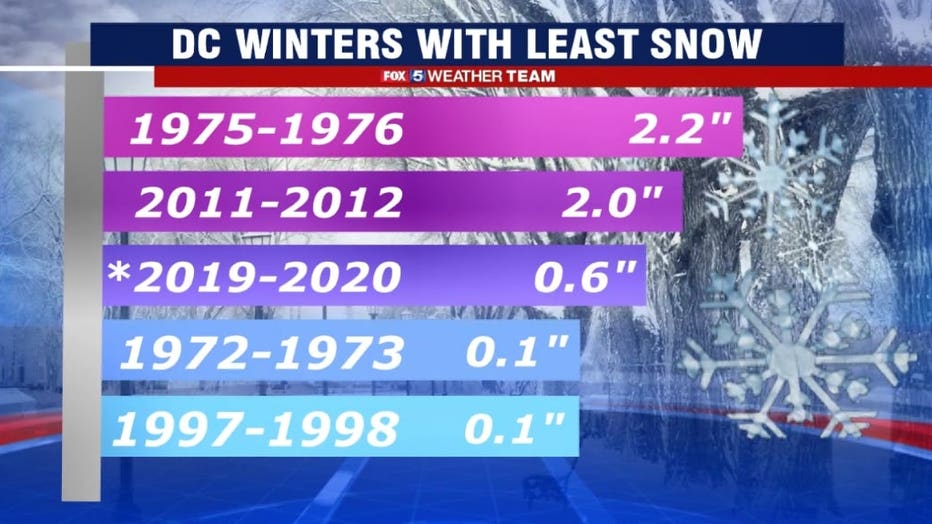 From a snow lovers perspective, last winter was awful. It was the least snow the DC area had seen in over twenty years, and was only the third time on record that DC failed to pick up even an inch of snow all season long.

It was very much an anomaly, and a failure given that most winter outlooks, including our own, called for an average to above average snowfall season. It was the least snow a weak El Niño winter had ever produced for our region. However, the failure of the El Niño to become the forecast “Modoki El Niño” that is more typical with some of our snowier winters.

Another feature known as the Madden-Julian Oscillation also strongly drove the winter pattern in a milder direction, while the forecasting blocking patterns over the Arctic needed to transfer colder air into our region never fully materialized.

Complicated stuff, but just shows how much goes into something like a winter outlook, and how much farther the science really needs to go in order to accurately predict it. It is imperfect but in all honesty for a forecaster like me, that it what makes it a lot of fun. 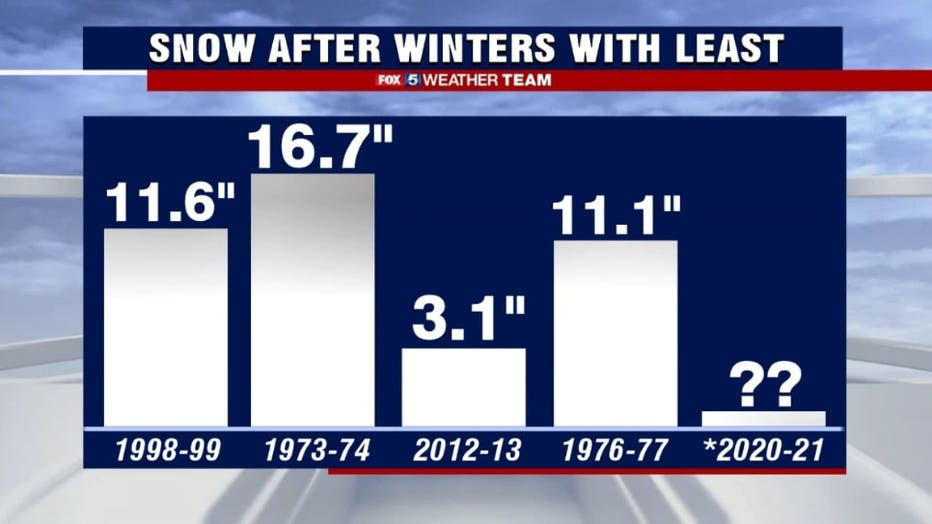 A little bit of good news for snow lovers is that every subsequent winter following a top 5 poor snowfall winter did feature more snowfall, three of which went on to feature double digit snowfall, but only one of which (1973-1974) went on to be an above normal snowfall year.

Just simply using statistics, the odds of us getting less snow than last year are very low. Especially given the previous two cases of less than normal snowfall were very strong El Niño years, which is a pattern we are not in this year. In fact, we are in quite the opposite pattern with a La Niña already taking form across the equatorial Pacific. 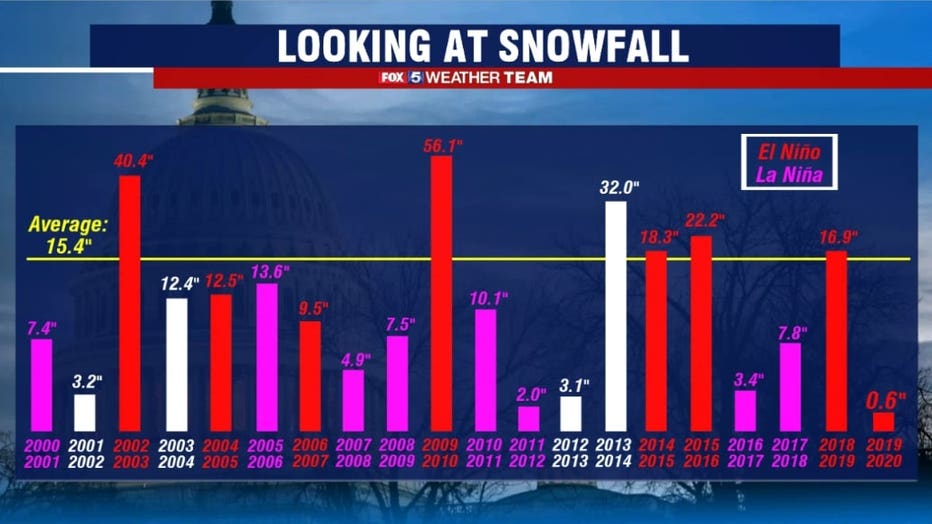 Probably the most significant tool forecasters use when looking at the winter ahead is whether or not we are looking at a El Niño or La Niña weather pattern, and what the strength of it is.

Just going back over the last two decades, you can see why. Only six years in the last twenty have featured above normal snowfall, with five of them being El Niño years.

Pacific water temperatures are already dipping into La Niña territory and you can see why this would impact our forecast. Not a single La Niña winter since the turn of the century has featured above normal snowfall.

In fact, as far back as record go, only five of the twenty winters on record have featured above normal snowfall. 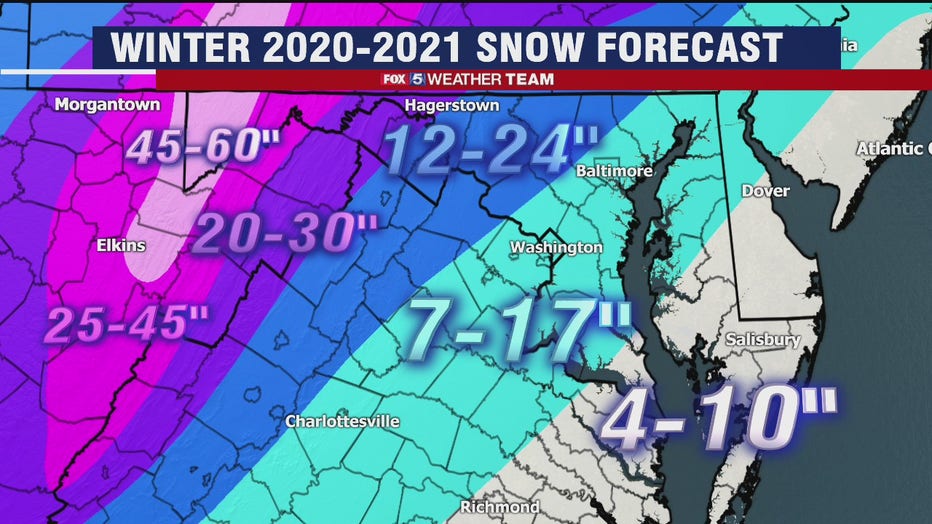 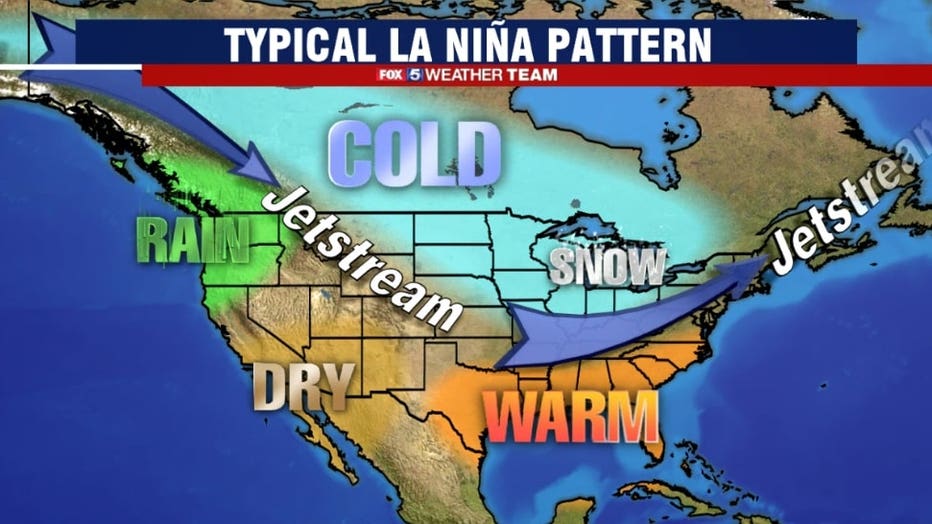 A typical La Niña weather patterns are known for their cold interiors and milder coastal zones. They tend to be characterized by more “zonal” upper level winds, or weather patterns that move flat west to east across the country as opposed to more north, south features.

When the Jetstream does buckle, the dips are more typical in the midcontinent, which favors colder than normal conditions across the Plains and the Upper Midwest, while turning upper flow out of the Southwest across the eastern half of the country. 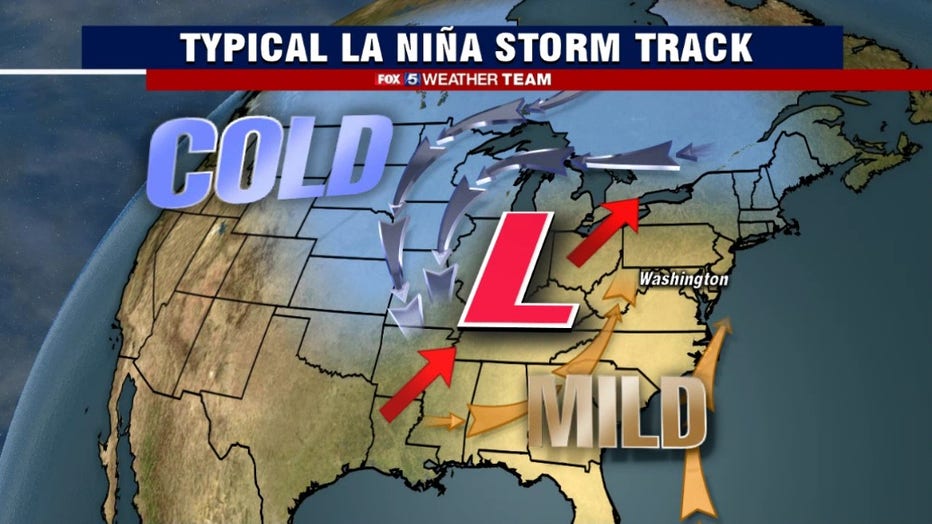 Winter storm systems that develop under such a pattern tend to take an interior storm track. These are storms that pass to the west of our region, typically up through the Great Lakes region.

This puts the DC region on the eastern quadrant of the storm. This quadrant is defined by warm, southern flow that more often than not brings in milder air ahead of the precipitation.

This often times leads to a snow to rain scenarios which cut back on snow totals, or just a simply chilly rain. After these storms pass, we are typically treated to a period of short lived “storm driven cold”, cold air that wraps around the back side of the storm, but often comes with dry conditions. What we are more susceptible to with such a storm track through will be sleet and ice events however, particularly during the second half of the winter. 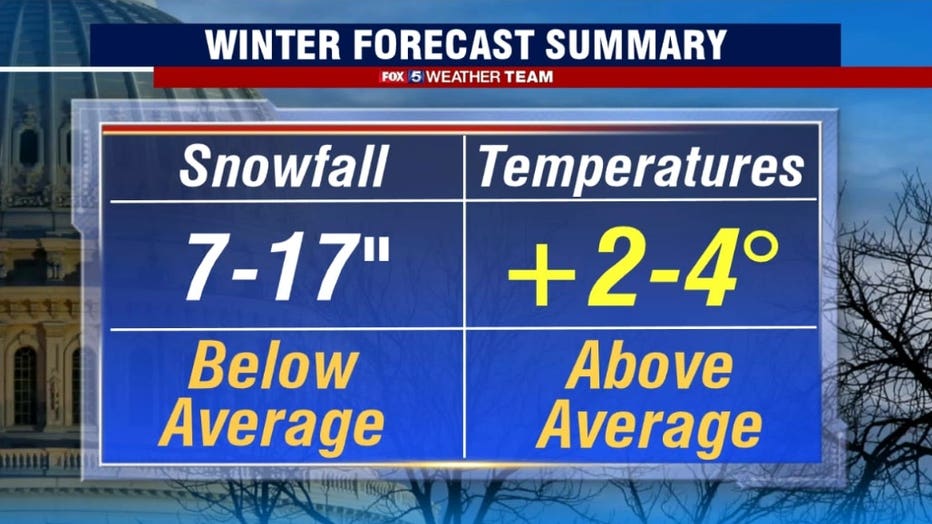 Given the forecast La Niña pattern along with a number of other features including tropical forcing, the very warm Atlantic waters, the storm tracks seen so far this fall, and the trends in the upper level atmosphere over the Arctic, we are not forecasting a very extreme winter ahead.

With the interior storm track favored and recent climate model trends, we are favoring warmer than normal temperatures this weekend, calling for this winter to wrap up 2-4° above normal as a whole.

This does not mean there will not be any cold periods this winter, we just expected that the extremes will be few and far between, and the cold spells not as long lived as the average winter. As for snowfall, while we do expect significantly more snow than last year’s dismal 0.6” we do not expect a major snow season.

Perhaps 1-2 “middle range” storms of 4-8” for our region, but we believe most of the snow will come from smaller scale events or events which start as snow and transition to rain. We are not calling for any blizzards this year. We believe the likelihood of an icing event is above normal however, especially during the second half of the winter season.

This is 2020 however where anything crazy does seem to be possible, and winter forecasts are very much imperfect and rely heavily on statistics. As last season’s El Niño was a statistical anomaly by not at all behaving like we expected, there is always the chance that this season’s La Niña could surprise in the snowier direction. 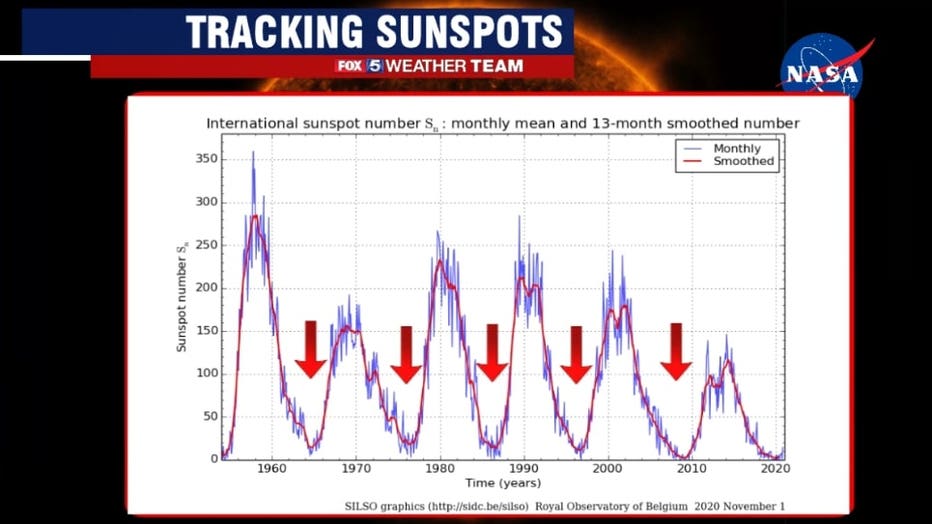 Some research suggests that during periods of low solar activity, stronger blocking patterns can develop over the Arctic regions which can lead to stronger and more persistent cold air outbreaks into North America.

More cold being present simply increases the chance that when a storm comes northward, there is enough cold air to make it a snow event instead of a rain event. 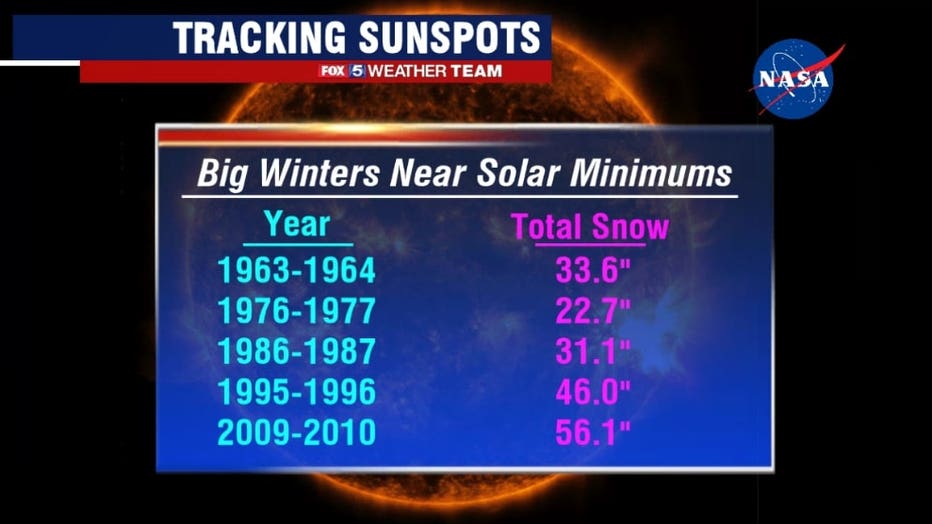 If we look at the previous five dips in solar activity going to 1960, marked by the red arrows on the previous image, each one has a winter season within a year or two of the solar minimum that is a heavy snow season. The most recent example was the 2009-2010 “snowmageddon” winter, the snowiest in DC history, which featured three blizzards. Our region has not seen a blizzard since 2016 when solar activity was actually near a maximum. So if the pattern is to continue, we would be about due for one of these winters.

However, four of those major snow years coincided with an El Niño as well…which is why thoughts from many were that last year would be snowier than expected. There was one exception to that though, and that is the winter of 1995-1996, a La Niña winter, which featured one of the biggest snow storms on record for the DC region in early January. The season ended with 46” of snow, the third most in DC history. 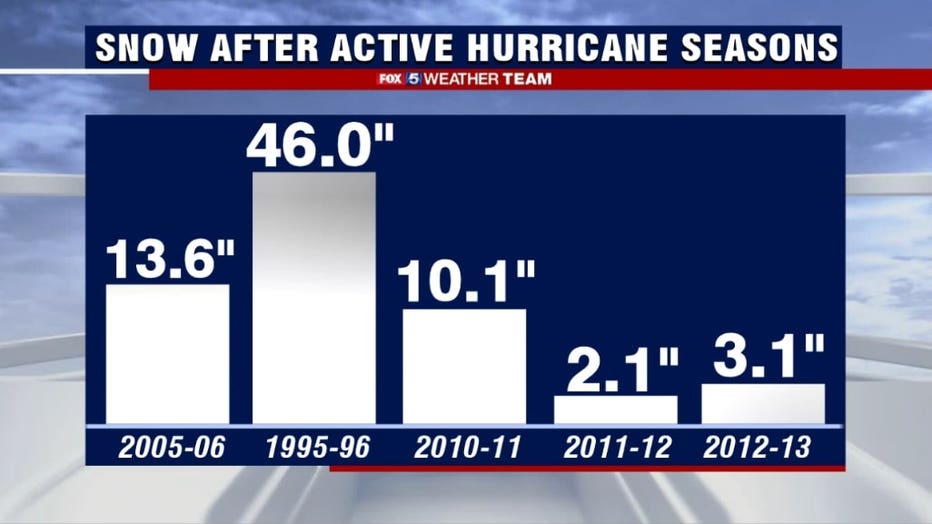 Active hurricane seasons are well correlated with two things, a very warm tropical Atlantic coinciding with La Niña. This is a category that the top four most active seasons fall into. This includes this winter of 1995-1996 which was also the only case with above normal snowfall. What is also interesting about that winter was it was what we call a “moderate La Niña”…essentially one of medium strength.

A number of climate models are indicating that our upcoming winter may indeed be a moderate La Niña event as well. So while it is too much of a statistical anomaly to forecast a similar winter, just know that the odds that we could end up with a “snow-prise” winter are far from zero.

And then there is what Tucker Barnes always tells me. “We’re due.” And while he may be correct for us snow lovers, it does not mean Mother Nature is going to cooperate with us. She tends to do her own thing after all, regardless of what any winter outlook is going to try to predict.

So there you have it! Our very first winter outlook of the 2020s! Though it all, the only guarantee for this winter is that there are no guarantees. Waves of cold, mild days, some snow and some rain are all going to be likely. No matter what the weather, the FOX 5 Weather Team is going to be here through it all to keep you safe. So keep it tuned in all winter long!