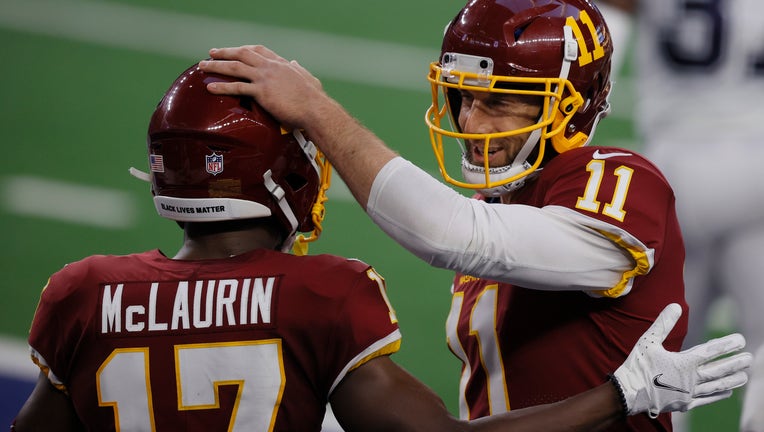 Alex Smith #11 of the Washington Football Team celebrates with Terry McLaurin #17 during the second quarter of a game against the Dallas Cowboys at AT&T Stadium on November 26, 2020 in Arlington, Texas. (Photo by Tom Pennington/Getty Images)

WASHINGTON - The Washington Football Team is riding momentum off arguably its biggest win of the season, but the team is set to face its biggest challenge yet: the undefeated Pittsburgh Steelers.

Monday's game in Pittsburgh is crucial for Washington, which has won two straight games and is now tied for the NFC East division lead with the New York Giants.

Pittsburgh will be down linebacker Bud Dupree, who tore his ACL last week. The Steelers' starting running back, James Conner, will also likely be out with COVID-19. Pittsburgh's future Hall of Fame Quarterback Ben Roethlisberger is questionable to play with a knee injury.

Of course, Washington has its own question marks heading into Monday's game, which kicks off at 5 p.m. on FOX 5.