Customer leaves $5,000 tip for his waitress

A generous patron left a $5,000 tip for a waitress in a Massachusetts restaurant over the weekend.

SALISBURY, Mass. - A surprise awaited Jennifer Navaria Saturday night as she worked her last table in a Massachusetts restaurant.

When she first spotted a receipt on the table at the Seaglass restaurant in Salisbury, she thought the tip was $50. But she quickly realized that the patron left a $5,000 tip on the $157 bill. 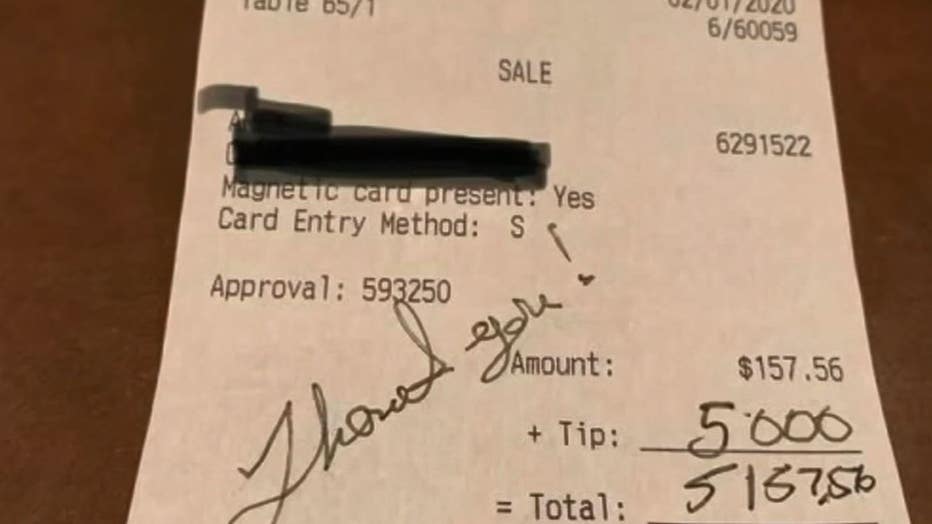 Navaria first thought the tip was $50. But she quickly realized that the patron left a $5,000 tip on the $157 bill. (Source: Jennifer Navaria)

The generous diner, car dealership owner Ernie Boch, Jr., was in town attending a friend's concert on Salisbury Beach. Navaria tracked him down on Facebook and reached out to express her gratitude.

“It's huge,” Navaria told WFXT. “I mean, it's huge. You know, you see this happening, but you would never think it would happen to you.”Navaria said Boch’s generosity left her shaking. She called his tip “unbelievable.”

“I don't know what it was. There was a feeling that this person was amazing. And that's why I did it," Boch explained.

Navaria said she already thoroughly enjoys her job, but Boch made it all that much better.

Boch said he was inspired by another Boston-area big name: Dorchester native Donnie Wahlberg, who left a $2,020 tip on a $78 check at an Illinois IHOP on New Year's Day.

"She was just so outstanding, I said, ‘This is it. This is the 2020 Donnie Challenge, absolutely,’" Boch said.