Parents and community activists gathered outside a Loudoun County School Board meeting on Tuesday to demand "an end to the racist and divisive ideologies being infused into the government schools." FOX 5's Nana-Sentuo Bonsu reports on what went down.

LOUDOUN COUNTY, Va. - Parents and community activists gathered outside a Loudoun County School Board meeting on Tuesday to demand "an end to the racist and divisive ideologies being infused into the government schools."

Loudoun County has become the nerve center for parental activism in recent years, driving debates over critical race theory that have bled over to the rest of the United States.

"Parents woke up and realized that their school systems, the administrators, the school boards, are more focused on politics than they are doing their jobs," Ian Prior, the executive director of Fight For Schools, said at Tuesday's protest.

Loudoun County parents have been credited by many for boosting Republican Virginia Gov. Glenn Youngkin to victory in last year's election, along with Virginia Attorney General Jason Miyares and Lt. Gov. Winsome Sears. Sears, a military veteran and an immigrant, is also the first Black woman elected statewide in Virginia. 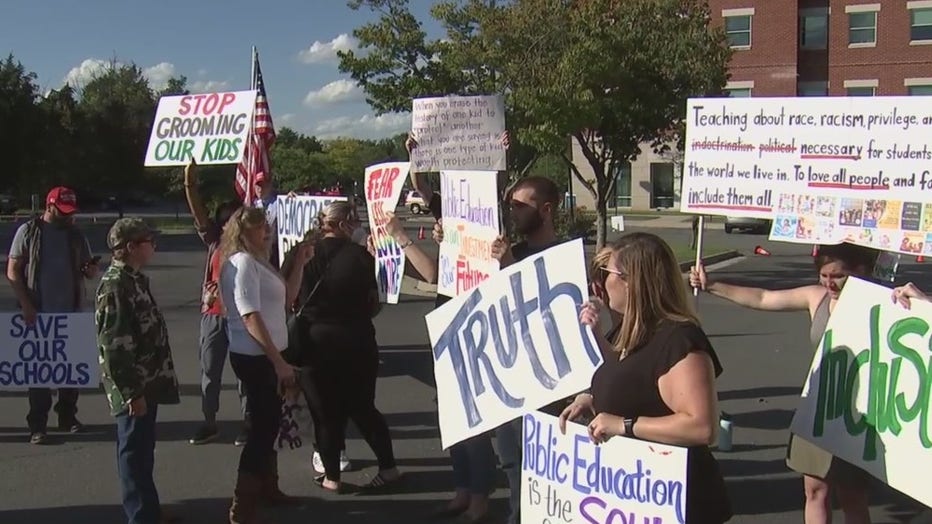 Youngkin signed an executive order on his first day in office to "end the use of inherently divisive concepts, including Critical Race Theory, and to raise academic standards."

Other parent advocacy groups, including Army of Parents and Moms for Liberty, also joined Tuesday's protest, as well as Hung Cao, a retired Navy Capt. running for Virginia's 10th congressional district as a Republican.

"As your congressman, I will take all the political agenda out of the schools," Cao said Tuesday. "I will do that so that you, the parents, have control over what your children do, what they learn."

Tuesday's gathering was referred to as the "ERACED Rally." Another group held a nearby demonstration dubbed the "EmbRACE don't erase Protest."

"Now we MUST show why social emotional learning, CRT, and talking about race and racism are important," the hosts wrote on a Facebook event for the rally. "We cannot let this anti-education rhetoric to go unchallenged. We must stand up for our Black and POC students."