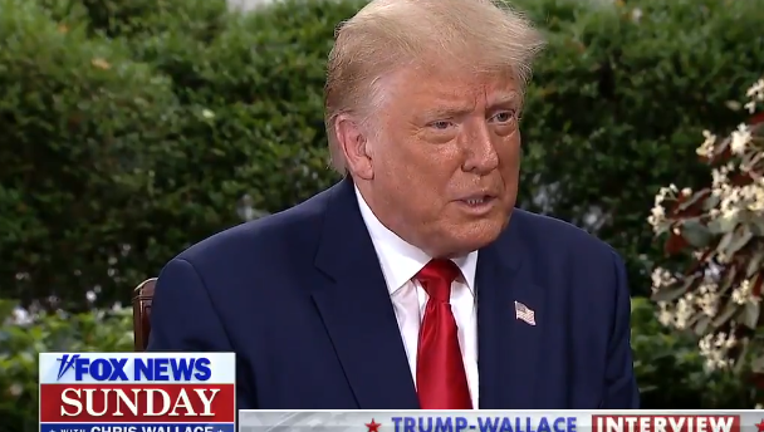 WASHINGTON - President Trump, in an exclusive interview with Fox News, challenged his critics on his handling of the coronavirus pandemic, threatened a veto for the defense bill, and speculated on whether he will accept the results if his Democratic challenger wins the presidency in November.

Trump, in a contentious sitdown that aired Sunday, told "Fox News Sunday" host Chris Wallace that recent statistics regarding COVID-19 cases and deaths are misleading. Early in the discussion, the president disputed Wallace’s claim that the U.S. currently has the seventh-highest mortality rate in the world.

“I think we have one of the lowest mortality rates in the world,” Trump said, offering White House statistics that differed from the ones Wallace cited.

Wallace then explained that his numbers came from Johns Hopkins University, which ranked the U.S. seventh in mortality, ahead of the UK and worse than Brazil and Russia. He noted that the White House’s chart, which uses data from the European Centre for Disease Protection and Control, has the U.S. ahead of Spain and Italy, but worse than Brazil and South Korea, with Russia and other countries not included in the chart.

From there, Trump pushed back against statements from leading U.S. doctors, specifically CDC Director Robert Redfield and National Institute of Allergy and Infectious Diseases Director Anthony Fauci. Redfield said last week that he expects the coming fall and winter to be among “the most difficult times that we’ve experienced in American public health.”

When asked if he agrees with Redfield, Trump said he was unsure, but pointed to mistakes that doctors have made.

“I don't know and I don't think he knows,” Trump said. I don't think anybody knows with this. This is a very tricky deal. Everybody thought this summer it would go away and it would come back in the fall. Well, when the summer came, they used to say the heat -- the heat was good for it and it really knocks it out, remember? And then it might come back in the fall. So they got that one wrong.”

Trump then addressed perceived tension between him and Fauci, who was targeted by Trump aide Daniel Scavino, who tweeted a cartoon depicting Fauci as a leaker and an alarmist. When asked about this, Trump appeared to partially agree with it.

The president insisted that he and Fauci have “a great relationship,” but claimed that “he was wrong” early in the pandemic by saying it would pass and that Trump’s ban on travel from China was a mistake.

“He then admitted that I was right,” Trump said.

When confronted with the notion that he, too, has made errors, Trump did not push back.

“It's going to disappear and I'll be right,” he said.

In the meantime, Trump says that he takes responsibility for what happens to the nation during the pandemic, as critics claim that the U.S. does not have a national plan.

“Look, I take responsibility always for everything because it's ultimately my job, too. I have to get everybody in line,” Trump said, while stating that governors have to lead as well.

Trump downplayed the recent rise in national case numbers, claiming that it is the result of increased testing, with the implication that it is not a true rise in the severity of the pandemic, a claim that leading health experts have disputed. Trump pointed to new cases that include people with minor symptoms who recover quickly. Early on during the pandemic, it was mainly those with serious symptoms were getting tested.

“No country has ever done what we've done in terms of testing. We are the envy of the world,” he said.

The Trump administration announced that they are supporting a lawsuit to overturn ObamaCare. When asked why he would oppose something that people are relying on during a pandemic, Trump said he will be replacing it soon, and is “signing a health care plan within two weeks.”

Shifting to how Washington will help Americans facing an ongoing economic crisis that has developed due to the pandemic, Trump warned that he may not sign a new stimulus bill if it does not include certain provisions.

With the current stimulus bill running out later this month, Republicans want new legislation to include liability limits as states reopen, people go back to work and businesses deal with customers. Trump himself has pushed strongly for a payroll tax cut, which would help employers.

Asked if he would only sign a bill if it included these items, Trump did not give a firm answer.

“Well, we’re going to see. But we do need protections because businesses are going to get sued just because somebody walked in. You don’t know where this virus comes from. They’ll sit down at a restaurant. They’ll sue the restaurant, the guy’s out of business.”

Trump then said he “would consider not signing” a bill that did not include the payroll tax cut.

Another bill that Trump has threatened to veto is the National Defense Authorization Act, because it includes a provision for renaming military bases currently named for Confederate generals, even -- as Wallace pointed out -- if the military supports it.

"I don’t care what the military says. I do – I’m supposed to make the decision," Trump said. "Fort Bragg is a big deal. We won two World Wars, nobody even knows General Bragg. We won two World Wars. Go to that community where Fort Bragg is, in a great state, I love that state, go to the community, say how do you like the idea of renaming Fort Bragg, and then what are we going to name it? We’re going to name it after the Reverend Al Sharpton?"

Trump said he did not want to erase the names of bases used in those past wars, and claimed "most other people are" against it as well.

The bill would also give soldiers a pay raise, but Trump insisted that "they’ll get their pay raise."

Later in the interview, Trump touted a recent stock market surge and his hopes for an economic recovery that will help him come November.

Trump pointed to the NASDAQ hitting an all-time high recently, and the Dow Jones nearing a record high.

The conversation eventually took a turn toward a recent wave of violent crime in several major U.S. cities. Trump said that the cities in question are led by Democrats and “are stupidly run.”

“It was always bad but now it’s gotten totally out of control and it’s really because they want to defund the police,” Trump said.

The president then claimed that his presumptive November opponent, former vice president Joe Biden, wants to defund police, citing a charter that he signed with Sen. Bernie Sanders, I-Vt. Biden and Sanders formed a Unity Task Force that has brought the more progressive wing of the Democratic party together with the more moderate side.

Wallace noted that the charter does not call for defunding police, but that Biden has called for reallocating money previously meant for police to go toward other programs such as mental counseling. The concept of redistributing certain police funds to other programs has been closely tied to those calling for defunding.

Asked about racial tension in the wake of George Floyd’s death, Trump recognized how Black Americans are feeling. When asked if he understands why Black people are angry about being disproportionately shot and killed by police compared to White people, Trump said he does.

“Of course I do. Of course I do,” Trump said. At the same time, the president noted that “many Whites are killed also,” and that “this is going on for a long time, long before I got here.”

Turning to the upcoming election, Trump had strong words for Joe Biden, taking political and personal shots at the presumptive Democratic nominee.

“Biden wants to come in and ruin our country, triple your taxes,” Trump said, claiming that if he becomes president, Biden will be pushed to the left. “He will destroy this country, but it won’t be him. It will be the radical left. The same type ideology that took over Venezuela, one of the richest countries in the world. They now have no water, they have no food, and they have no medicine.”

In the past, Trump has taken shots at Biden’s mental capabilities, and he continued to go down that path.

“Biden can't put two sentences together,” Trump said. “They wheel him out. He goes up -- he repeats -- they ask him questions. He reads a teleprompter and then he goes back into his basement. You tell me the American people want to have that in an age where we're in trouble with other nations that are looking to do numbers on us.”

Wallace asked Trump if he thinks Biden is senile, but Trump refused to go there, but still continued his attack.

“I don't want to say that. I'd say he's not competent to be president. To be president, you have to be sharp and tough and so many other things. He doesn't even come out of his basement. They think, ‘Oh this is a great campaign.’ So he goes in, I'll then make a speech, it'll be a great speech, and some young guy, starts writing, ‘Vice President Biden said this, this, this, this.’ He didn't say it. Joe doesn't know he's alive, OK? He doesn't know he's alive.”

Later on, Trump said that this is why he will be victorious.

“[Y]ou know why I won’t lose, because the country, in the end, they’re not going to have a man who – who’s shot. He’s shot, he’s mentally shot,” Trump said.

Asked about the possibility of losing, however, Trump noted that he does not handle losing well, and may not handle it well if it happens in November.

When asked if he is gracious, Trump said, "You don’t know until you see. It depends.” He then claimed that mail-in voting, which Democrats have pushed as a response to the coronavirus pandemic, “is going to rig the election.”

Asked if this means that he will not accept the election results, Trump said, “No. I have to see.”