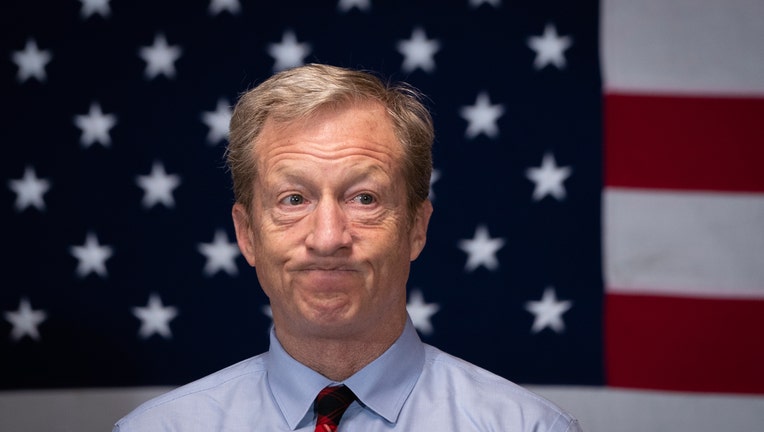 Now that's one way to shake loose some votes!

Billionaire White House hopeful Tom Steyer danced on stage with rapper Juvenile in a final appeal to voters in South Carolina before the all-important primary Saturday.

Steyer, wearing his signature tartan tie, got low, bounced and shook his hips as Juvenile performed a rendition of “Back that Thang Up" -- the PG version of the 1999 classic "Back that Azz Up."

His wife, Kat Taylor, joined him on stage as a back-up dancer and got down too while holding her smartphone.

Steyer hosted a get out the vote rally in Columbia and invited Yolanda Adams, DJ Jazzy Jeff, and Juvenile. Before the unlikely Steyer-Juvenile performance, attendees were treated to a generous spread of food, including a mashed potato bar, the Daily Mail reported.

Juvenile was supposed to perform earlier as a warm-up to Steyer, but there was a sound issue that prevented him from finishing his set.

“Come on sound man, you’re getting worse by the second,” the rapper complained, the Daily Mail reported. “I think the sound man went to the bar!”

Juvenile then left the stage and Adams, a gospel singer, took his place.

The rapper returned after Steyer’s headlining speech and busted out his hit with Steyer and his wife and daughter joining him on stage.

Steyer's campaign embraced the viral moment and tweeted out a portion of the video reminding voters to head to the polls with the hashtag #BackThatVoteUp.

Steyer, who has been heavily courting black voters, is optimistic of a good result in South Carolina.

The latest polls place him in third place – behind Biden and Sanders.

Steyer told Fox News on Friday how he viewed his chances.

Asked how a solid finish in South Carolina would help him in the Super Tuesday states, Steyer said, “I think that’s a springboard for people to think that I can pull this party together, which is what I want.”

"It appears he resonates very well. He’s very personable," Robertson said. "I’m not going to be surprised if Steyer wins a delegate or two.”

And he predicted that if Steyer does well, it would take a bite out of Biden’s support among older black voters.