The disgraced anti-Trump group The Lincoln Project is facing intense backlash for orchestrating the viral hoax involving tiki torch-holding individuals associating themselves with the Youngkin campaign.

The imagery of the tiki torches was apparently meant to invoke the white nationalists who participated in the deadly events of Charlottesville in 2017.

The stunt was seized upon by the left, including staffers from Democrat candidate Terry McAuliffe's campaign.

"The Unite the Right rally was one of the darkest days in the Commonwealth's history. this is who Glenn Youngkin's supporters are," McAuliffe spokesperson Christina Freundlich tweeted.

Now, after widespread suspicion from Twitter critics that it was orchestrated by Youngkin opponents, the anti-Trump group took ownership of what it called a "demonstration."

"The Lincoln Project has run advertisements highlighting the hate unleashed in Charlottesville as well as Glenn Youngkin’s continued failure to denounce Donald Trump’s ‘very fine people on both sides.’ We will continue to draw this contrast in broadcast videos, on our social media platforms, and at Youngkin rallies," the group stated in a press release. "Today’s demonstration was our way of reminding Virginians what happened in Charlottesville four years ago, the Republican Party’s embrace of those values, and Glenn Youngkin’s failure to condemn it." 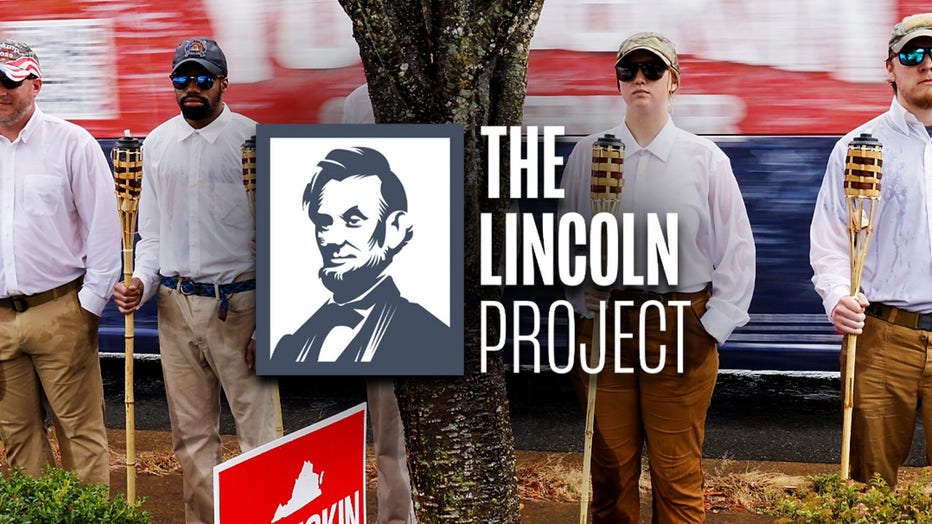 "Anyone who continues to associate themselves with The Lincoln Project owns this. This is who you are," Fourth Watch media critic Stever Krakauer wrote.

"I do not think it’s out of realm of possibility that Lincoln Project is taking blame, because they have no shame and their reputation really can’t get any worse," Washington Free Beacon executive editor Brent Scher tweeted.

"Needless to say, right-wing groups that perpetrated a fraud like this -- causing media figures and campaign operatives to spend all day swamping Twitter with an outright racist lie -- would be instantly banned from social media," Substack journalist Glenn Greenwald tweeted.

"Apparently, it's totally fine to dress up as tiki torch nazis as long as you play for the right team," Daily Caller reporter Andrew Kerr wrote.

"Lincoln Projects biggest grift is they aim all their stuff at liberal Twitter so their funders have no idea how unconvincing and juvenile it is. But it does help them afford the vacation homes," journalist Zaid Jilani quipped.

"How much more proof do we need that the Lincoln Project is nothing but a bunch of deranged hacks?" Rep. Dan Crenshaw, R-Texas, asked.

Others questioned whether or not the Lincoln Project was actually behind the stunt and was simply taking credit, comparing it to ISIS taking credit for various terrorist attacks.

"What's more likely? That the Lincoln Project hired Democratic insiders in Virginia to hold the tiki torch stunt or that they're taking credit for it after it backfired to keep the backlash away from the McAuliffe campaign?" political commentator Josh Jordan wondered.

The statement comes as Twitter users began claiming they had identified the individuals participating in stunt allegedly having ties to Virginia Democrats. The group issued a statement denying they organized the stunt.

Following the hoax being exposed, McAuliffe campaign manager Chris Rolling tweeted, "What happened today is disgusting and distasteful and we condemn it in the strongest terms. Those involved should immediately apologize."

The Lincoln Project has managed to maintain its media darling status on the left despite multiple scandals that plagued the group, including allegations that its co-founder John Weaver had sexually harassed young men including minors and growing questions over its shady finances.

Virginia polls, which previously had McAuliffe in a comfortable lead, have not only tightened in recent weeks but appear to be giving Youngkin the edge. A Fox News poll released Thursday showed Youngkin a whopping eight points above McAuliffe among likely voters.