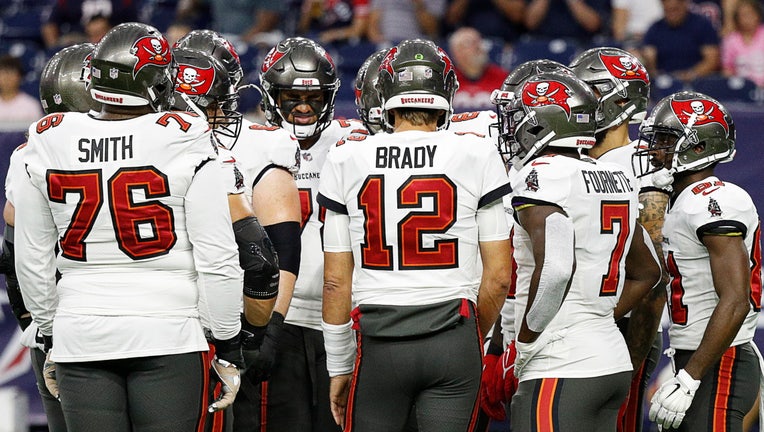 Tom Brady #12 of the Tampa Bay Buccaneers huddles his offense against the Houston Texans during a NFL preseason game at NRG Stadium on August 28, 2021 in Houston, Texas. (Photo by Bob Levey/Getty Images)

Arians said his biggest concern heading into the start of the season has been worrying about losing a key starter for 10 days if they test positive for COVID-19. He now isn't as stressed since the Bucs are just the second team to report full vaccination following the Atlanta Falcons.

In early August, he had said he expected all of his players and coaches to be fully vaccinated by the start of the season.

Even running back Leonard Fournette, who made headlines over the summer when he said he "can't do it" regarding the vaccine, appeared to have a change of heart. He was one of the last holdouts, saying he wanted to do his research on the vaccine. He now says he's at peace with it and wanted to do his part to put the team out of harm's way.

"People are still catching it, but it makes it a lot better to have the shot," Fournette said. "We need every hand in here for these next couple big games we've got coming up."

However, those who’ve been fully vaccinated won’t have to automatically quarantine. That means the higher the vaccine rate, the fewer interruptions to practice and games a team is likely to experience.

In addition to the NFL's protocols, Arians has added in his own.

On the road, the Bucs are in lockdown. No one goes out. They stay in their own bubble and it worked last season. The Bucs had very few positive tests and Arians said it's part of the reason they were holding up the Lombardi Trophy at the end.

"I just prayed on it," Fournette said. "So whatever happens, happens. I'm just trying to be the best teammate I can be. Not causing no more than what we can handle now as is. People getting sick each and every day. Just trying to be the bigger person and get it over with."

The Atlanta Falcons became the first NFL team to have all of its players vaccinated against COVID-19, the team announced in mid-August.

While the NFL has not required players to be vaccinated, the league did say it would not extend the season to accommodate a COVID-19 outbreak among players that causes a game cancellation.