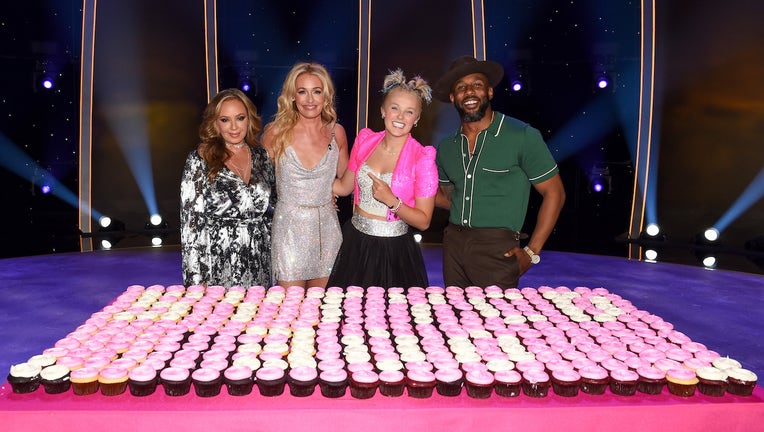 CHICAGO - Welcome back to "So You Think You Can Dance" recaps! In "The Dancers Dozen," we finally learn which 12 dancers will be competing for the title of America’s favorite dancer and celebrate 300 episodes of America’s favorite dance show. Prepare to be delighted (and grab a hankie). Miss last week’s episode? You can read our recap and watch On Demand or stream on FOXNow, Hulu and Tubi. This television station is owned by the FOX Corporation.

"So You Think You Can Dance" is now truly back. This episode — the show’s 300th! — has it all. Cat Deeley being a delightful human in a gorgeous sparkly dress! The reveal of our top 12! A new judge! Tears! Umbrellas! J.Lo! Dramatic fake-outs! And most importantly, dance: surprising, funny, moving, inspiring, mind-bending, secondhand-exhaustion-inducing dance.

Let’s not waste any time, because we’ve got a lot of ground to cover, and unlike star-in-the-making Ralyn, your recapper has limited stamina. Bring on the dance!

WATCH FREE ON TUBI: "So You Think You Can Dance" — get the app

"So You Think You Can Dance": Don’t drop the umbrella like it’s hot

If there’s one off-note in this episode, it’s that the reveals of the top 12 dancers aren’t really all that suspenseful. There are exceptions of course, and we’ll get to those (if briefly), but for the most part, it’s pretty easy to tell who’s going to stay because one dancer has been prominently featured on the show so far and the other hasn’t.

But we can’t have it all, and what we get when the reveals are over are our first two incredibly charming pairs.

First up is contemporary dancer Virginia and hip-hop master James, a.k.a. Lord Finn, whose dance skills only narrowly eclipse his supportive boyfriend skills. (We get a brief glimpse of his girlfriend Brianna, who was eliminated last week when he FaceTimes her to share the good news about his top 12 status.) They start the night off on a very high note (pun intended) with an entertaining take on the Snoop Dogg classic, "Drop It Like It’s Hot."

WATCH FREE ON TUBI: JoJo Siwa gets her start as a star in "Dance Moms"

And it’s great! Lord Finn is obviously in his element, but Virginia stretches way out of her comfort zone and triumphs. They work together seamlessly and seem to be having a great time — the most important ingredient in a dance like this. The judges agree, praising Virginia’s transition into this style. It’s so much fun to watch that this recapper is listening to the song as she writes this so that she can relive it in her mind. Good job, team!

Next up: Waverly and Jordan.

These two elegant beings, clad in drenched white costumes that cling to their frames, perform their graceful contemporary number to Tom Rosenthal’s "Bob in the Rain and the Lizard of Hope." Choreographers Mandy Korpinen and Elizabeth Petrin handed these two a heck of a challenge in the form of two umbrellas (one of which malfunctions a bit, but never fear, Waverly has Jordan’s back and they get that situation handled in a hurry.) But like the first pair, these two perform beautifully. It’s a great way to kick things off.

WATCH FREE ON TUBI: Dance reality series "Bring It" — get the app

Like Lord Finn, Waverly and Jordan (so, three out of the four dancers we’ve seen until this point), Beau benefits from having his first number parked firmly within his wheelhouse. He’s also paired with Anna, another dancer with tons of personality and a knack for character work and incorporating humor into her performances. It’s a genius move — their take on Frank Sinatra’s "Dancing in the Dark" is a non-stop charm offensive, but it’s also just a really good dance (with choreo from Al Blackstone.)

The judges, and the audience, are delighted.

The next pair is made up of two of the strongest dancers from the audition and choreography rounds: hip-hop dancer Essence, who freestyled after her first audition at tWitch’s prompting, and Thiago, whose audition was so good the show used it as a "cold open" (meaning they played the whole thing in its entirety, without introduction or commentary, before the credits played.)

So it’s a bit of a let-down when they turn in a good-not-great performance.

It doesn’t help that the first three pairs have undeniable chemistry, as it underlines an apparent disconnect between these two talents. After they finish their performance (to the Annie Lennox song "No More I Love Yous"), tWitch rightly lauds Essence for committing fully to a style that’s very, very different from street dance. He also tells her she’ll need to start working on keeping her toes pointed. Thiago’s work is technically perfect, but new judge Leah Remini says she wasn’t drawn in by him — it wasn’t as emotional an experience as it might have been.

WATCH FREE ON TUBI: "Eurythmics: Sweet Dreams, the Video Album" — get the app

"So You Think You Can Dance": Stunts and something stunning

The next pair is ballroom dancer Carter and contemporary dancer Ralyn, who JoJo Siwa challenged to embrace her strength. When Ralyn gets her ticket to the top 12, tWitch warns her that she tends to disappear a little bit on stage and says she’ll need to keep it at 100 from now on.

And wow, does she ever.

If there’s one problem with Carter and Ralyn’s jubilant, stunt-filled performance to Elton John’s stone-cold classic "I’m Still Standing," it’s that Carter, the ballroom pro in the pair, is outshone by his partner. Ralyn is lit up inside! This young woman is a star.

And that would have been a great note on which to end, but not so fast: There’s one more number.

On the off-chance that you’re reading but haven’t watched the episode and have yet to press play on the clip above, let me just say that JoJo Siwa said that, of the thousands and thousands of dances she’s seen in her life, Keaton and Alexis’s was the best. And if that doesn’t convince you, maybe this will?

Watching their performance to "Rome" by Dermot Kennedy, I felt like I was watching a pair of Olympic-level ice dancers— not because of their expressiveness, though they’re very expressive, but because they’re so in sync that it seems as if they’ve been practicing together for years. It’s a remarkable, moving performance with exceptional choreography from Talia Favia. That’s a lot of adjectives but they are all warranted. Wow.

"So You Think You Can Dance": Elimination time... or not

There’s a new, "American Idol"-style twist to SYTYCD for this season: the studio audience gets a chance to vote for their favorite dancers, and the bottom four vote-getters are up for elimination. So Virginia, Carter, Thiago and Essence are called forward, and tWitch reveals that the person going home is... no one! It’s the 300th episode, you think they’re going to end things with an elimination? No way.

And after the energetic group number, we jeté right into the credits.

"So You Think You Can Dance": Best of the night

"So You Think You Can Dance" airs Wednesdays on FOX. The first three episodes are currently available to stream on Hulu. You can also catch up for free on Tubi. Recaps run weekly.

About the writer: Allison Shoemaker is a Chicago-based pop-culture critic and journalist. She is the author of "How TV Can Make You Smarter," and a member of the Television Critics Association and the Chicago Film Critics Association. She is also a producer and co-host for the Podlander Presents network of podcasts. Find her on Twitter and Instagram at @allisonshoe. Allison is a Tomatometer-approved Top Critic on Rotten Tomatoes.

Howard High (2022): A modern-age "Bring It On," "Howard High" is an energetic teen musical that follows a high school performance group who must compete against a rival school in order to save their arts program. The crowd-pleasing film from "You Got Served" director Chris Stokes is inspired by his 2020 TV mini-series of the same name, which is also streaming on Tubi. With its talented cast of up-and-comers, "Howard High" shines a light on the challenges that school arts programs face in underfunded neighborhoods — all through the power of song and dance. "Howard High" is a Tubi Original. Rated TV-14. 102 minutes. Dir: Chris Stokes. Featuring: Chrissy Stokes, Veronika Bozeman, Lindsay Diann, Jarell Houston, Dylan Mooney.

How to watch "So You Think You Can Dance"

"So You Think You Can Dance" airs Wednesdays at 9 p.m. EST on FOX. You can also watch On Demand or stream online via FOXNow. This season’s episodes to date are streaming on Hulu and Tubi — get the app.