"Saturday Night Live" returned from its summer hiatus this weekend and wasted no time in mocking the Democrats’ infighting regarding the infrastructure bill.

"How was everybody’s summer? Mine was bad!" Johnson as Biden shouted cheerily from a podium during a mock news conference. "Not ‘Cuomo bad’ but definitely not ‘Afghanistan good.’ Everyone keeps razzing me about that drone strike – but on the bright side I went the whole summer without falling down the stairs once."

"How was everybody’s summer? Mine was bad! – Not ‘Cuomo bad’ but definitely not ‘Afghanistan good.'"

He said he was also excited that Broadway was back again after a long shutdown.

Johnson’s Biden was then joined on one side by moderate Democrats Sen. Kyrsten Sinema (Cecily Strong), who said she didn’t come to Congress to make friends – "and so far mission accomplished!" and Sen. Joe Manchin (Aidy Bryant), who said if he votes for electric cars as a West Virginia politician, "They’re going to kill me."

Representing the progressives on the other side of the president were Rep. Ilhan Omar (Ego Nwodim) and Rep. Alexandria Ocasio-Cortez (Melissa Villaseñor), who called herself the "Cruella of the Met Gala."

"I wore a dress that said ‘Tax the rich,’ then spent all night partying with the rich. Oops," she shrugged.

Although Biden seemed sure in the sketch that all of the Democrats were on the same page, AOC said she wanted $3 billion for green energy tax credits while Manchin was aiming closer to "zero." 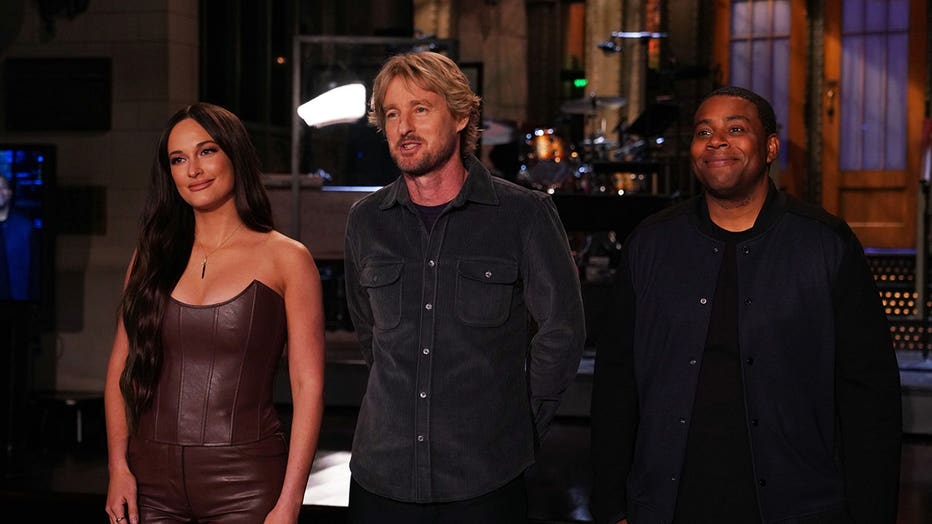 The president later asked if all of them could agree that roads are good.

While Omar said she liked roads and Manchin agreed because they’re where "trucks live," Sinema said she wanted no roads to exist because: "chaos."

Biden finally came to his favorite subject – trains – near the end of the sketch.

"Come on, don’t take trains away from me!" the president – known for his Amtrak excursions – begged as all four of the Democrats groaned at his suggestion. "We need to remind people of the grandeur of American rail travel," he argued. "The quiet car, the seats that face backwards, the sliding bathroom doors that don’t quite lock … the full bottle of Gatorade rolling around the floor of the train. It goes that way. It goes back. Without trains, no America."

Disgraced former New York Gov. Andrew Cuomo (Pete Davidson) then came out to say he believes Democrats can get the infrastructure bill done because they’re like one big "Italian family" who like to hug, kiss and "run their fingers up each other’s backs."

He said just like him the infrastructure bill deserves a second chance "and a third chance and up to at least 11 chances."

He also plugged his new book, a follow-up to "Lessons in Leadership" called "Whoops." Cuomo was forced to resign during the summer after a report from the New York attorney general said he had sexually harassed several women.

‘Don’t panic too much'

Finally, Senate Majority Leader Chuck Schumer (Alex Moffat) came onstage, introducing himself by saying, "You might remember me but you don’t."

He then reassured Democrats that the next time they get an email from the Democratic Party with a "scary, desperate subject line like ‘It’s all over, Jennifer! Democracy is dead unless you donate $7 now!’ Don’t panic too much. Us Democrats are all in this together."

Biden agreed that "fundamentally we’re all the same …"

In real-life D.C., House Speaker Nancy Pelosi was forced to delay the vote on the bipartisan infrastructure bill on Friday after the progressive wing said they would sink the bill unless it was coupled with a more progressively ambitious $3.5 trillion Build Back Better bill.

Owen Wilson made his debut guest-hosting appearance on "SNL" Saturday and Kacey Musgraves was the musical guest.