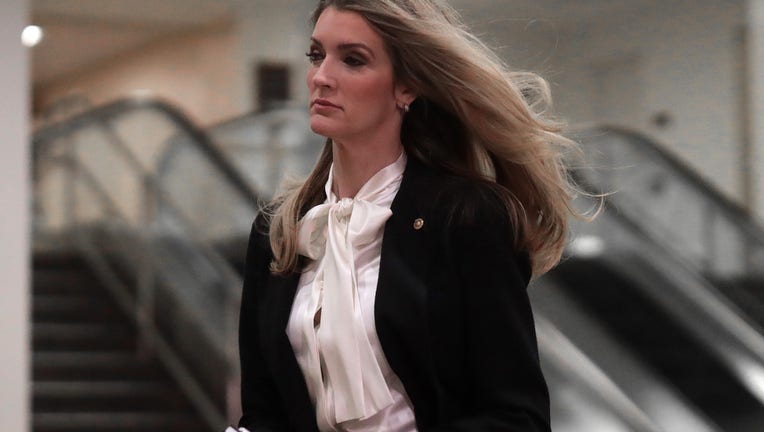 WASHINGTON - Sen. Kelly Loeffler, R-Ga., sold off $46,027 worth of stock in an online travel company days after the shares were purchased and just before President Trump restricted most travel from Europe to the United States amid the coronavirus pandemic, according to a new report.

Trump announced on March 11 that the U.S. was suspending most travel from Europe into the U.S. for 30 days in an effort to slow the spread of COVID-19.

On March 10 and 11, Loeffler sold her shares in Booking Holdings, which facilities online bookings for travel services, flights and hotels. Those shares had been purchased March 6 -- the day she visited the Centers for Disease Control and Prevention (CDC) in Atlanta with President Trump to be updated on the fast-spreading virus.

Bloomberg first reported on the stock trades, which were disclosed by Loeffler's office.

The travel and airline industries have been virtually wiped out by the coronavirus pandemic sweeping the globe, which has forced governments to issue stay-at-home orders for billions of people around the world.

Loeffler had purchased the shares with her husband, Jeffrey Sprecher, who is chairman of the New York Stock Exchange and whose net worth is said to be north of $500 million.

Loeffler and her husband also sold stock on Jan. 24 -- the same day she sat in on a briefing from two members of President Trump’s Coronavirus Task Force, according to a Daily Beast report.

Between that day and Feb. 14, the couple sold shares worth between $1.2 million and $3.1 million, the report said. They also purchased stock in a maker of software that helps people work at home -- just before millions of Americans were forced to leave their offices because of the outbreak, the report said.

"If you actually look at the personal transaction reports that were filed, it notices at the bottom that I'm only informed of my transactions after they occur -- several weeks," she said. "So, certainly, those transactions -- at least on my behalf -- were a mix of buys and sells. Very routine for my portfolio."

“Her stock portfolio is managed independently by third-party advisors,” spokeswoman Kerry Rom told The Associated Press this week. “Sen. Loeffler continues to operate with integrity and transparency -- following both the spirit and the letter of the law.”

Loeffler has faced additional scrutiny following the mandatory disclosure filed Tuesday, and after she and Sprecher sold off substantial portions of their portfolio last month, as well.

According to the filing, across four transactions in late February and early March, Sprecher purchased between about $166,000 and $415,000 in DuPont stock. DuPont says it is "working around the clock in all parts of the world to increase capacity of protective garments during this time of high demand" amid the coronavirus outbreak, according to its website.

Loeffler is one of a handful of senators who are facing criticism amid stock selloffs ahead of the coronavirus crisis, which has seen the stock market tank in recent weeks.

Senate Intelligence Committee Chairman Richard Burr, R-N.C., is reportedly being investigated by the Justice Department over his sale of as much as $1.7 million in stocks in the run-up to the coronavirus crisis. The Securities and Exchange Commission (SEC) is also said to be involved, and the FBI has reportedly reached out to Burr for information.

And Sen. James Inhofe, R-Okla., sold as much as $400,000 in stock on Jan. 27, in companies such as PayPal, Apple and real estate company Brookfield Asset Management, The New York Times also reported.

Fox News' Brooke Singman and The Associated Press contributed to this report.