If you’re a small business owner in Prince George’s County, you can apply for a grant launched just yesterday by the PFC Black Chamber of Commerce and a county councilmember.

PRINCE GEORGE'S COUNTY, Md. (FOX 5 DC) - On Thursday, a Prince George’s County councilmember and the PFC Black Chamber of Commerce launched an effort to support some of the county’s smallest businesses. The two are asking for the community’s help to keep it going.

The new grant program, launched on Thursday, is called the “Open Door Fund.” To qualify, businesses must have 10 or less employees, a $250,000 or less annual revenue, have an active business in Prince George’s County since January 2019, and be able to demonstrate the impact the coronavirus pandemic has had on their business.

Councilmember Mel Franklin put up $47,000 from his office to kick-start the fund. Instead of relying on the government to keep it going, they’re asking for the community: local banks, businesses and residents who are doing well, to donate to the “Open Door Fund.” Franklin and the Chamber’s president say want this grant pot to grow to around $250,000.

“Those are the businesses that are overlooked a lot of times with the relief funding,” said Councilmember Franklin while speaking of the smaller businesses that can qualify. “There was a report on the paycheck program, the federal program, that over half of the money for that program when to large corporations instead of small businesses.”

The Chamber and the councilmember are also looking at a number of minority-owned businesses impacted by the pandemic. Franklin noted a New York Federal Reserve report from April that found the number of Black-owned businesses dropped 41%.

The Phenix Salon Suites in Largo provides rental spaces for dozens of small businesses and entrepreneurs to operate in.

On Friday, some of those small business owners said they are not receiving the same financial support as other larger businesses, like restaurants and bars.

“I think her business has fallen off, almost close to 50%,” said Kitty Dawson, a client getting her nails done at the “Splash, The Ultimate Nail Boutique” inside Phenix Salon Suites on Friday.

Dawson says she tried to help by trying to safely organize home visits once nail salon owners were allowed to continue their services.

“… have them come to my house. And I would have two to three people there. But she was going from place-to-place-to-place and it got to be really, it was wearing on her. And she’s much younger than I am, and it seemed as though, no matter what she did, it was like, she’d get this far ahead and fall back.” 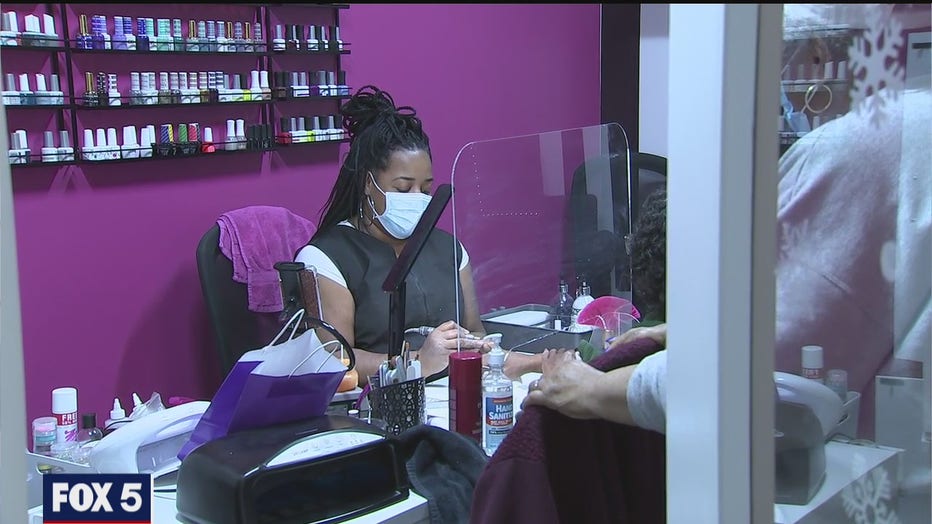 Yasha Frazier, who owns “Splash, The Ultimate Nail Boutique,” is staying put at the Phenix location. She told FOX 5, “The clients right now are so unpredictable because you know, I have older clients and they don’t really want to come out.”

Also inside the Phenix, Kevin Henderson, who owns "Younique Selections" with his wife, said all they were able to receive was around $1,000 in PPP money since March.

“This pandemic has brought my company to its knees,” said Rayford Lee Brown, owner of B&B Cleaning Services, LLC, “I lost all my income, except three contracts that I have now. That was total about $7,500 that’s gone.”

Brown tells FOX 5 he owns a cleaning company, a business you might guess would do well in a pandemic. However, Brown, who employees around a half-a-dozen people, told FOX 5 his clients were churches and clubs.

Brown says he’s had to invest more into marketing to get business and invest money he no longer has.

Brown told FOX 5 the money does not hurt and he would likely need more. At this point Brown told FOX 5, he can’t afford to turn away money. Every penny counts.