Home security video shows the moments a plane in Victoria, Minnesota crashed on Saturday, killing everyone on board. Video from: Blake Kraus

The crash closed Highway 5 near Rose Street through the night as authorities investigated the crash site. NTSB has planned a presser for Sunday evening to brief the media on the crash.

Three people died Saturday when a plane came crashing to the ground in Victoria, Minnesota, the NTSB confirms.

According to the FAA, the single-engine plane took off from the Alexandria Municipal Airport and was set to land at Flying Cloud Airport in Eden Prairie when it went down at 5:40 p.m. and crashed into a vacant lot and a home.

No one on the ground was injured, officials said.  Investigators from NTSB say the plane involved is a Mooney M20M aircraft.

The unthinkable brought a neighborhood near downtown Victoria together on Saturday afternoon. Three people were killed when a single-engine plane came down in the area and scattered debris across town.

FOX 9 has learned the people aboard the flight were Dr. James Edney, Dr. Sara Mertes, and her husband Jake Mertes. Dr. Edney was a professor emeritus with the University of Nebraska Medical Center's Department of Surgery. He was also the former chief of the division of surgical oncology. A spokesperson said Dr. Edney retired from the university in 2015.

Sara was a family medicine doctor at Cabinet Peaks Medical Center where Jake also worked as an EMT.

NTSB is now working to determine exactly what caused the crash. The Carver County sheriff says there is debris in two spots, at the site along Highway 5 and then at an area to the south. 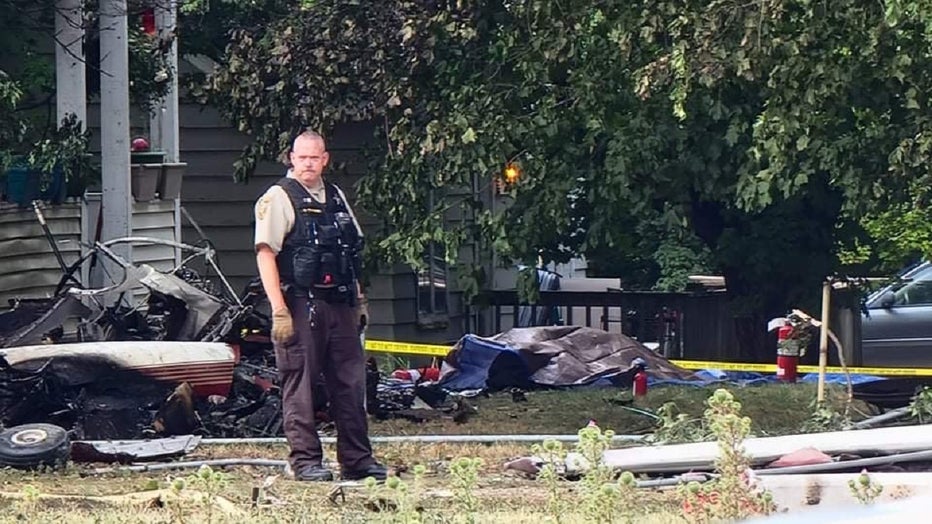 "It's a tragic event for the friends and family, and everyone involved," said Sheriff Jason Kamerud.

Video from a neighbor's home security camera shows the plane hitting the ground before exploding into flames in the vacant lot and skidding towards the home. The video also shows people running to help after the crash.

Deputies are asking members of the public to avoid the area as the investigation is underway. Highway 5 reopened Sunday morning.