A Virginia school district is catching heat tonight after teachers were seen wearing t-shirts with a logo that represents a Neo-Nazi symbol.

VIRGINIA (FOX 5 DC) - One Virginia school district is catching heat after teachers were seen wearing t-shirts with a logo that resembles a swastika at a conference.

The image of the teachers wearing the shirt has been circulating on social media. The school district is now apologizing to families.

The superintendent of the Hanover County School district says the logo is supposed to represent people coming together but many people on social media and the NAACP say this design looks very much like a neo-Nazi symbol.

Shawn Dandridge, vice president of the Hanover NAACP, said, "There are so many other ways to use artistic expression."

The NAACP in Hanover County is calling out the school district for a logo that made the front of t-shirts teachers wore at a professional learning conference this week.

"I was taken aback. Too many similarities," Dandridge said. "As everyone was commenting, it looks just like a swastika." 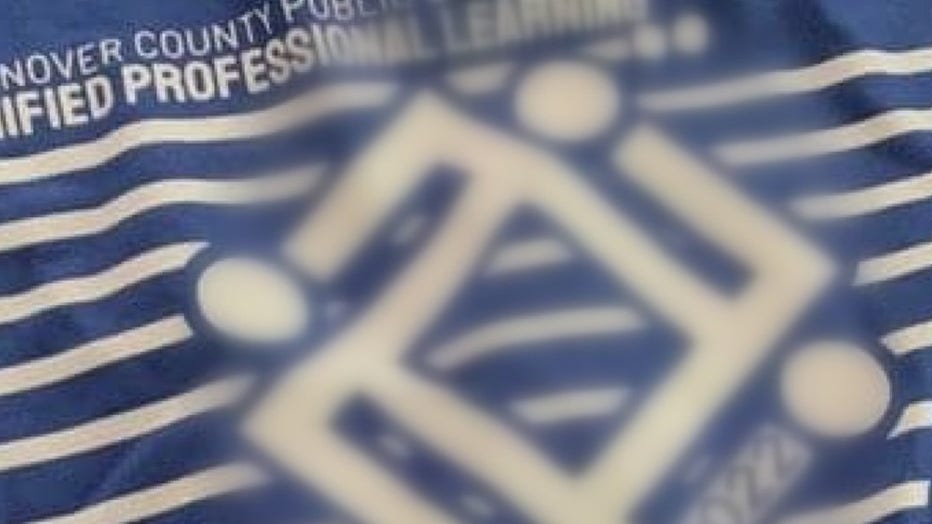 In an apology letter from Hanover County Public Schools, Superintendent Michael Gill explained that the shirt was designed by a teacher. It's supposed to represent "four hands and arms grasping together — a symbol of unity for our all-county professional learning conference," the letter reads.

Superintendent Gill went on to say he condemns anything associated with the Nazi regime in the strongest manner possible and they've stopped distributing the shirts. The logo will be removed from any conference materials as well.

One image being shared on social media shows a stack of shirts folded on a table with a sign that reads "Presenter shirts." The photo was posted by Unified Professional Learning.

"We want the school board to get some kind of diversity inclusion person in place, so they can have a better take and position and listen to the people and the concerns of the county," Dandridge said. "Because there are so many things in Hanover that keep happening."

Dandridge along with the Hanover NAACP branch says they stand in solidarity with their Jewish brothers and sisters and the shirts highlight the troubling lack of diversity in the area.

FOX5 reached out to the ADL Washington who provided this statement:

"We appreciate Superintendent Gill’s swift statement to the community clarifying the intention behind the image that was used on the graphic for the Unified Professional Learning Conference, and his acknowledgement of the impact this has on the Jewish community and other marginalized groups targeted by white supremacy and hate. We were deeply disturbed when we saw the image, and with antisemitic incidents continuing to reach historic highs across the country and the Commonwealth, it was upsetting for many of our community members to see this symbol—which so closely resembles a swastika—being used for a conference for educators. Since 1979, the Anti-Defamation League (ADL) has tracked and published an annual Audit of Antisemitic Incidents. In 2021, ADL tabulated 2,717 antisemitism incidents throughout the United States. This is a 34% increase from the 2,026 incidents tabulated in 2020 and the highest number on record since ADL began tracking antisemitic incidents in 1979. In Virginia, 46 antisemitic incidents were reported in 2021, a 6 percent decrease from the 49 incidents reported in 2020, and a 64 percent increase from the 28 incidents reported in 2019. Virginia was the state with the 15th highest number of antisemitic incidents reported in the country for 2021. ADL DC will continue to work with the Jewish Community Federation of Richmond, The Virginia Center for Inclusive Communities and the Virginia Holocaust Museum to ensure Hanover County Public School District and the families and communities it serves have the resources and support needed to educate and heal from this incident."