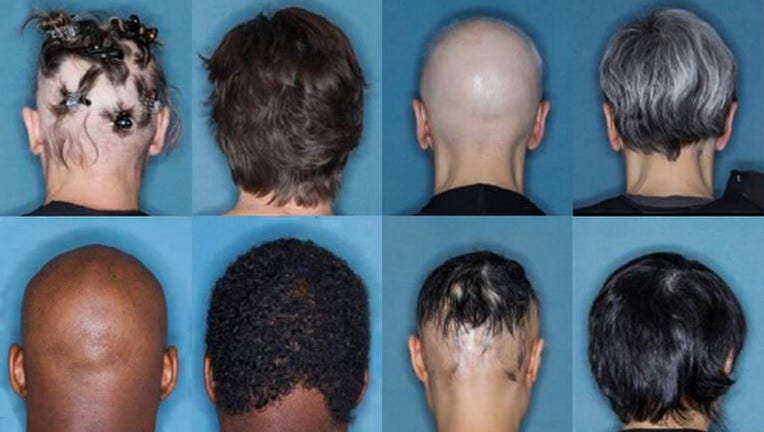 Before and after images for participants who received 36 weeks of treatment for alopecia areata with baricitinib. (Credit: Provided image / Yale School of Medicine)

A treatment for those with severe alopecia areata, an immune disorder that often results in hair loss, has been approved by the U.S. Food and Drug Administration for the first time.

Alopecia areata, commonly referred to as just alopecia, is an autoimmune disorder in which the body attacks its own hair follicles, causing hair to fall out and often in clumps.

The drug, called Olumiant (baricitinib), is the first FDA approval of a full-body drug for the condition, according to an agency statement.

The drug was originally approved in 2018 as a treatment for those suffering from moderately to severely active rheumatoid arthritis and was developed by the pharmaceutical company Eli Lilly. Until now, no FDA-approved treatment for the disease existed.

Olumiant as a treatment for alopecia was studied in two randomized, double-blind, placebo-controlled trials with patients who had at least 50% scalp hair loss for more than six months. The trial participants received either a placebo, 2 milligrams of Olumiant, or 4 milligrams of Olumiant every day for 36 weeks.

The results were published this year in the New England Journal of Medicine.

"This is so exciting, because the data clearly show how effective baricitinib is," Dr. Brett King, an associate professor of dermatology at the Yale School of Medicine and on the team who conducted the trials, said in a previous statement.

"These large, controlled trials tell us that we can alleviate some of the suffering from this awful disease," King added.

What is alopecia areata?

Alopecia areata affects more than 300,000 people in the U.S. each year, the FDA said in its statement.

It usually affects the head and face, in which hair typically falls out in small, round patches about the size of a quarter, according to the National Institute of Arthritis and Musculoskeletal and Skin Diseases (NIAMS), part of the National Institutes of Health. In some cases, hair loss can be more extensive.

Most people with the disease are healthy and have no other symptoms — and the course of the disease can vary from person to person, NIAMS says.

The now-infamous moment at the Oscars when Will Smith marched on stage and smacked Chris Rock over a joke about wife Jada Pinkett Smith’s shaved head inadvertently also shined a light on alopecia areata. Pinkett Smith revealed in 2018 that she was diagnosed with the condition and has often discussed the challenges of hair loss on Instagram and other social media platforms.

Will Smith vs. Chris Rock: What led up to the Oscars slap and what happened after

Will Smith slapped Chris Rock during the Oscars after he made a joke about his wife's hair loss. Here's a look at the timeline of events before and after the altercation.

For those who have alopecia areata, the body’s immune system mistakenly attacks hair follicles — causing inflammation.

"Researchers do not fully understand what causes the immune attack on hair follicles, but they believe that both genetic and environmental (non-genetic) factors play a role," the NIAMS says.

While anyone can get alopecia areata, some have a greater risk of developing it — including those with a close blood relative with the disease, as well as those who have asthma, hay fever, atopic dermatitis, thyroid disease, vitiligo, or Down syndrome.

The American Academy of Dermatology Association notes on its website how a few cancer patients who received a drug called nivolumab to treat lung cancer and melanoma have also developed alopecia areata, but the link still remains unclear.

"The drug is used to treat lung cancer and melanoma that has spread. Hair loss usually begins a few months after they start treatment. It’s called nivolumab-induced alopecia areata, and the hair loss is considered a good sign," the AAD notes. "This type of hair loss usually means that the drug is working."

Specifically, the treatment is a Janus kinase (JAK) inhibitor, which blocks the activity of a specific family of enzymes, interfering with the pathway that leads to inflammation, according to the agency.

The FDA said Olumiant is not recommended for use "in combination with other JAK inhibitors, biologic immunomodulators, cyclosporine or other potent immunosuppressants."

"Access to safe and effective treatment options is crucial for the significant number of Americans affected by severe alopecia," Dr. Kendall Marcus, director of the Division of Dermatology and Dentistry in the FDA’s Center for Drug Evaluation and Research, said in a statement. "Today’s approval will help fulfill a significant unmet need for patients with severe alopecia areata."