D.C. Attorney General Karl Racine has filed a civil lawsuit against the Washington CommanderS, its owner Dan Snyder, the NFL, and its commissioner Roger Goodell. FOX 5's David Kaplan says much of what is in the complaint filed Thursday has already been publicly reported. What’s new about this is that it’s going to a court of law.

WASHINGTON - The D.C. Attorney General announced Thursday that the District is filing a lawsuit against Dan Snyder, the Commanders, NFL Commissioner Roger Goodell, and the NFL.

At a press conference, Attorney General Karl A. Racine said that Dan Snyder, the Commanders and the NFL colluded to deceive D.C. residents regarding investigations into a "toxic workplace culture that impacted female employees especially."

According to Racine the investigation started in the Fall of 2021. During Thursday's press conference, Racine indicated that the Attorney General's office has "been carefully and thoroughly investigating the Washington Commanders and Mr. Snyder, related to allegations of sexual harassment and workplace misconduct. What we will prove in court is clear wrongdoing and violations of D.C. resident's consumer rights. The defendants lied about what they knew, and then they lied about what they were going to do about it, all in the service of protecting their image and profit." 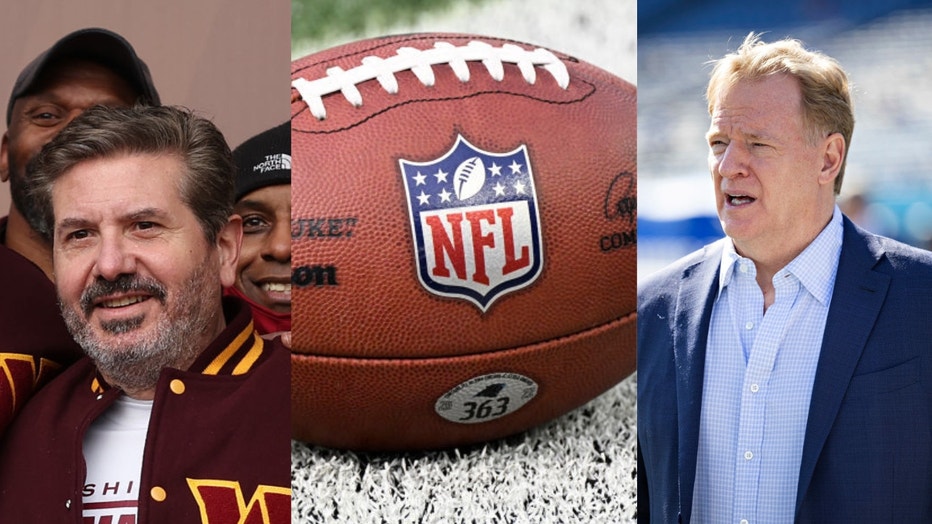 Racine added that the Commanders and the NFL "secretly entered an agreement" regarding an NFL investigation into allegations of sexual misconduct, harassment and misogyny, in order to protect the team's image and keep profits.

According to the AG's office, the Commanders and the league "publicly promised to fully cooperate with an independent investigation into the toxic work environment and sexual harassment within the Commanders organization and promised results the fans could trust. But behind the scenes, Snyder waged an interference campaign to cover up years of harassment. And the NFL let him do it."

Racine says the lawsuit is about holding Snyder, Goodell, the Commanders, and the NFL accountable.

"No one—not even Mr. Snyder—is above the law," Racine said.

The D.C. Attorney General announced Thursday that the District is filing a lawsuit against Dan Snyder, the Commanders, NFL Commissioner Roger Goodell, and the NFL, claiming that they colluded to deceive D.C. residents regarding investigations into the team's alleged toxic workplace culture.

In addition to Racine's investigation, the team is being investigated on several other fronts, including by U.S. House Committee for Oversight and Reform, the attorney general of Virginia, Congress and the league.

The NFL in July 2021 fined the team $10 million and owner Dan Snyder ceded daily operations to his wife Tanya after an investigation unearthed a "toxic" workplace culture. No written report was issued, leading the U.S. House Oversight Committee to investigate. In February, the franchise rebranded as the Commanders after dropping its old name in July 2020 following decades of complaints that it was racist toward Native Americans.

Commissioner Roger Goodell testified before the committee at a public hearing in June, and Snyder gave a deposition for more than 10 hours in July.

The Snyders' announced last week they hired Bank of America Securities to look into selling part or all of the team.

Here is a timeline documenting many of the key challenges that the Snyders' and Commanders have faced over the past two decades.