Main sections of the National Mall will close ahead of Wednesday's inauguration of President-elect Joe Biden as security measures continue to tighten in and around the nation’s capital.

WASHINGTON (FOX 5 DC) - Main sections of the National Mall will close ahead of Wednesday's inauguration of President-elect Joe Biden as security measures continue to tighten in and around the nation’s capital.

EVERYTHING YOU NEED TO KNOW ABOUT INAUGURATION DAY IN DC

The National Park Service made the announcement Friday. The temporary closure will impact ‘core areas’ and is scheduled to begin at 11 a.m. on Friday, January 15 and extend through at least Thursday, January 21.

D.C. Mayor Muriel Bowser and other agency leaders hold an emergency preparedness press conference as security tightens across the District ahead of the inauguration.

The closure affects all National Park Service property, memorials and facilities in the areas roughly bounded by Constitution Avenue, NW to the north; Ohio Drive, SW to the south; the Potomac River to the west; and 3rd Street to the east.

The area also generally includes President’s Park, including Lafayette Park, the Ellipse and the White House complex, as well as East and West Potomac parks, and National Park Service lands along Pennsylvania Avenue.

Inauguration activities and permitted First Amendment activities will be allowed in designated locations. Areas near the U.S. Navy Memorial and John Marshall Park have been designated as demonstration areas for those holding permits. Demonstrations will be limited in number and participants will be screened prior to entry and escorted to their permitted location, in addition to other safety related requirements. Only those holding permits will be allowed within the closed area.

"We appreciate the cooperation of Mayor Bowser working with Secretary Bernhardt to protect our city during the inaugural period," said Jeff Reinbold, superintendent of National Mall and Memorial Parks in a statement. "Working together, the National Park Service, mayor’s office, the Metropolitan Police Department, United States Secret Service and all of our local and federal law enforcement and public safety partners, have developed a plan to ensure for the safety of our Nation’s capital, city residents and monuments and memorials on the National Mall." 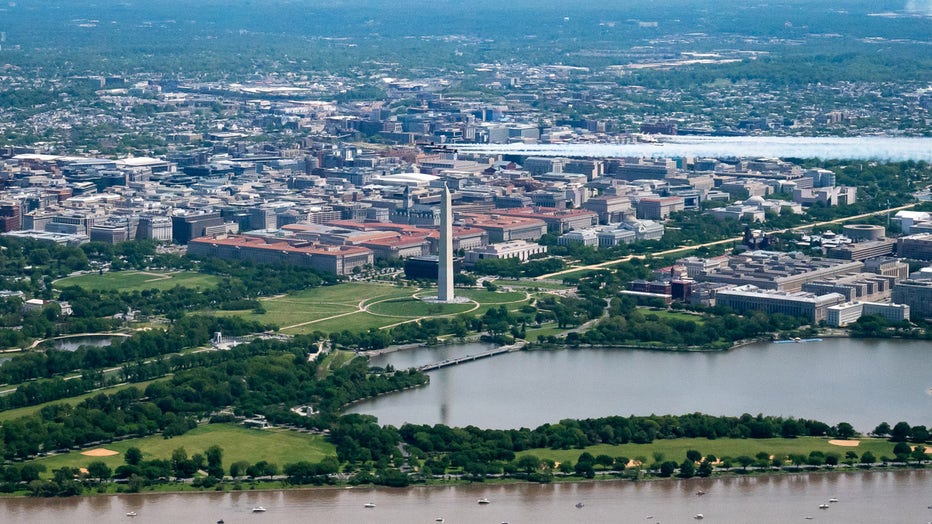 Aircraft from the U.S. Navy Blue Angels and U.S. Air Force Thunderbirds demonstration teams participate in the America Strong collaborative flyover Saturday, May 2, 2020 over the National Mall in Washington, D.C., in a salute to civilian and military

The following areas will be closed to public use:

17th Street , NW to H Street, NW, to include the adjacent sidewalks;

Pennsylvania Avenue, NW, from 15th Street, NW to 3rd Street, SW, and adjacent sidewalks (except for designated areas for First Amendment activities to be overseen by the National Park Service and United States Park Police);

In support of this effort, the National Park Service is also temporarily closing to the public the following roadways and park areas:

East and West Potomac Parks including Hains Point, all memorials and NPS areas contained within;

Lincoln Memorial Circle including all adjacent sidewalks and roadways;

Memorial Bridge, from Washington Boulevard to Lincoln Memorial Circle, including all adjacent sidewalks; and

Virginia’s Governor and Congress members announced Friday evening that in support of the inauguration and security response needed – now, starting 6 a.m. Tuesday to 6 a.m. Thursday, the Theodore Roosevelt Bridge, the Arlington Memorial Bridge, the I-395 Bridge and the 14th Street Bridge will close as the U.S. Secret Service continues to expand that security perimeter.

D.C. leaders and federal partners wanted these security measures in place ahead of this weekend when the FBI warned of armed protests in all 50 state capitols and D.C.