COBB COUNTY, Ga. - A Cobb County school bus driver is being called a hero for rescuing a woman trapped inside a wrecked car. 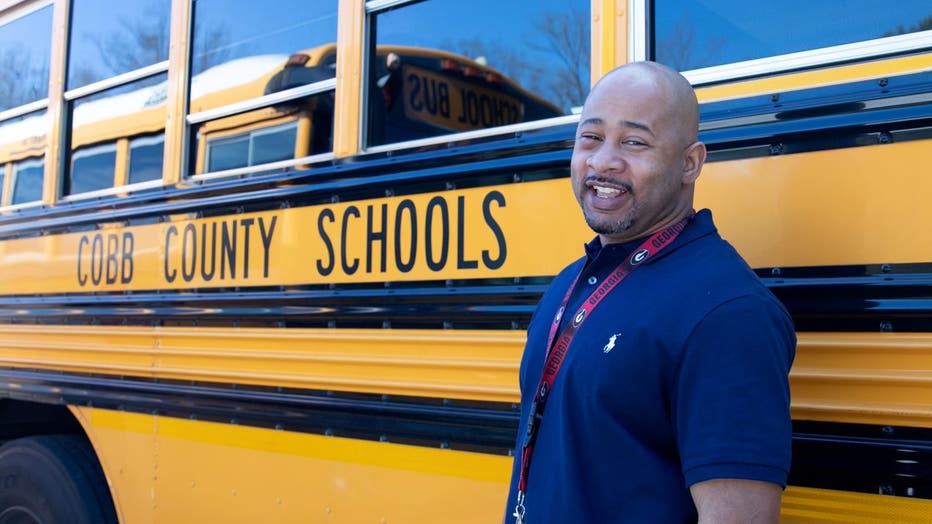 Randy Cooper helped rescue a woman who was trapped in her car. (Cobb County School System)

Every day, Ricky Cooper drives more than 200 students to school in Cobb County. One day, after dropping off his students, Cooper was driving his bus on a road in Mableton when he saw an overturned car in a ditch.

Seeing the wreck made Cooper stop the bus immedately. School officials say he lept into action, running down the hill through mud and bushes to reach the car. It was all because he was worried there may be kids in the car.

When he reached the car, he found a woman trapped inside. She was responsive but unable to escape because her door was jammed.

Cooper didn't hesitate. He found a way to open the car and help the woman back up the hill to wait for an emergency crew.

"She was rescued by a hero who drives a big yellow bus," Cobb County school officials said.

The woman had injured her arm but was alright otherwise.

Cooper wasn't the only bus driver to help out that day. Another driver had stopped and called 911 while Cooper was in the middle of his rescue.

"When the two bus drivers saw the wrecked car, they could have kept driving or just reported it to dispatch," officials said. "Some may not have even seen a driver in distress, but then again not everyone goes through the training to be a bus driver in Cobb Schools."

This isn't the first time Cooper has been a hero in his community. Last year, he helped a Fulton County private school student who got lost and was wandering on Mableton Parkway. Cooper connected him with the child's mother and waited until transportation arrived.

“Being a bus driver, you have to put kids first. You are their first contact before their teachers or principals see them,” Cooper said.

Cobb County Schools commended Cooper for his great deeds, calling him a hero.