President Biden addresses Americans after US reaches more than 500,000 deaths from COVID-19

President Biden remembered the American lives lost since the COVID-19 pandemic started more than a year ago.

WASHINGTON - President Joe Biden addressed Americans Monday night after the U.S. reported more than 500,000 deaths from COVID-19 since the pandemic started nearly a year ago.

"Today we mark a truly grim and horrific milestone," Biden said from the White House. "500,071 dead. That’s more Americans who’ve died in one year in this pandemic than in World War I, World War II and the Vietnam War combined."

Biden said the country’s loss is more than "any other nation on Earth."

The president said the lives lost are more than numbers: They were beloved family members.

"The people we lost were extraordinary," he continued.

Biden urged Americans not to become numb to the severity of the pandemic. He encouraged Americans to follow safety protocols with social distancing and mask-wearing, saying it’s a non-political issue.

Biden, first lady Jill Biden, Vice President Kamala Harris and second gentleman Doug Emhoff stood outside the White House for a moment of silence while the National Cathedral tolled its bell 500 times for each 1,000 lives lost.

Earlier in the day, White House press secretary Jen Psaki announced that Biden ordered flags to be flown at half-staff for five days to remember the nearly 500,000 Americans lost to COVID-19.

Health experts warn that another 100,000 deaths are likely in the next few months, despite mass vaccination rollouts and a slow decline in hospitalizations.

Dr. Anthony Fauci, the director of the National Institute of Allergy and Infectious Disease and a chief medical advisor to President Biden, said this pandemic is like nothing we’ve been through since the 1918 Spanish Flu pandemic.

RELATED: Dr. Fauci: It's 'possible' Americans may still be wearing face masks in 2022

"People decades from now are going to be talking about this as a terribly historic milestone in the history of this country. To have these many people to have died from a respiratory-borne infection, it really is a terrible situation that we’ve been through, and that we’re still going through," Fauci said Sunday in an interview with CNN.

The COVID-19 death toll is not stopping at 500,000. The virus has mutated countless times, with some variants easier to spread and harder to protect against.

"That’s the reason why we keep insisting to continue with the public health measures. We don’t want this to get much worse than it already is," Fauci added.

The global death toll was approaching 2.5 million, according to Johns Hopkins. 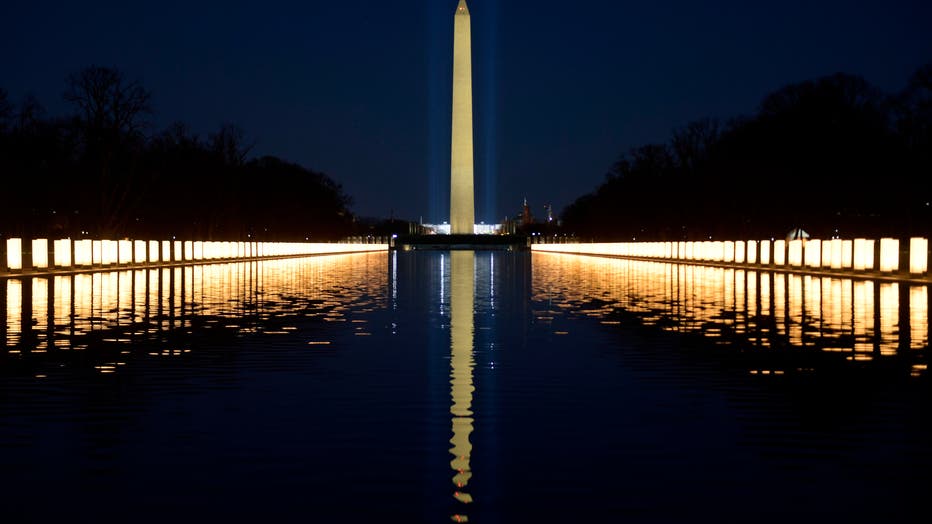 A Covid-19 Memorial is lighted at the Lincoln Memorial in Washington, DC, on January 19, 2021 during a vigil to honor the lives of those lost to COVID-19. (Photo by PATRICK T. FALLON/AFP via Getty Images)

In recent weeks, virus deaths have fallen from more than 4,000 reported on some days in January to an average of fewer than 1,900 per day.

Still, at almost half a million, the toll recorded by Johns Hopkins University is already greater than the population of Miami or Kansas City, Missouri. It is roughly equal to the number of Americans killed in World War II, the Korean War and the Vietnam War combined. It is akin to a 9/11 every day for nearly six months.

The toll, accounting for 1 in 5 deaths reported worldwide, has far exceeded early projections, which assumed that federal and state governments would marshal a comprehensive and sustained response and individual Americans would heed warnings.

"Tonight events, including the president’s remarks, will highlight the magnitude of loss that this milestone marks for the American people and so many families across the country. He will also speak to the power of the American people to turn the tide on this pandemic by working together following public health guidelines and getting in line to be vaccinated as soon as they are eligible," according to Psaki.