Dustin Lancaster, a Los Angeles restaurant owner, broke down the numbers of keeping his business alive in 2020.

The demand for food delivery services jumped during the coronavirus pandemic, but a recent survey of American adults found that this didn’t necessarily translate into more or better tips for service workers.

A poll of more than 2,500 U.S. adults in June on behalf of CreditCards.com found that sit-down dining is the most likely to garner a tip — but the figure fell slightly from pre-pandemic times.

Roughly 75% of customers said they "always" tip while eating at a restaurant, while just 5% said they "never" tip in the 2021 survey. That number dropped two percentage points from 77% who said they always tip in a survey conducted in 2019.

"Delivery people and food industry workers literally risked their lives to do their jobs over the past 16 months," said CreditCards.com industry analyst Ted Rossman. "It has been an incredibly difficult time to work in the service industry."

Millennials and Gen Z less likely to tip, but could be more generous when they do

The research also found a disparity in tipping habits based on age.

Millennial (52%) and Generation Z (49%) consumers are less likely to tip at a sit-down restaurant compared to baby boomers (84%), according to responses from the survey. But the Millennials and Gen-Z customers who do tip tend to leave higher amounts.

At sit-down restaurants, millennials leave on average a 21% tip compared with the 20% left by boomers, Gen Xers and Gen Zers, according to the survey. They were found to also leave slightly higher tips for food delivery and takeout.

The question of what makes millennials and Gen-Z less likely to say they "always" tip but are more generous when they do remains unanswered. But some experts say it could be a matter of having a lower income. 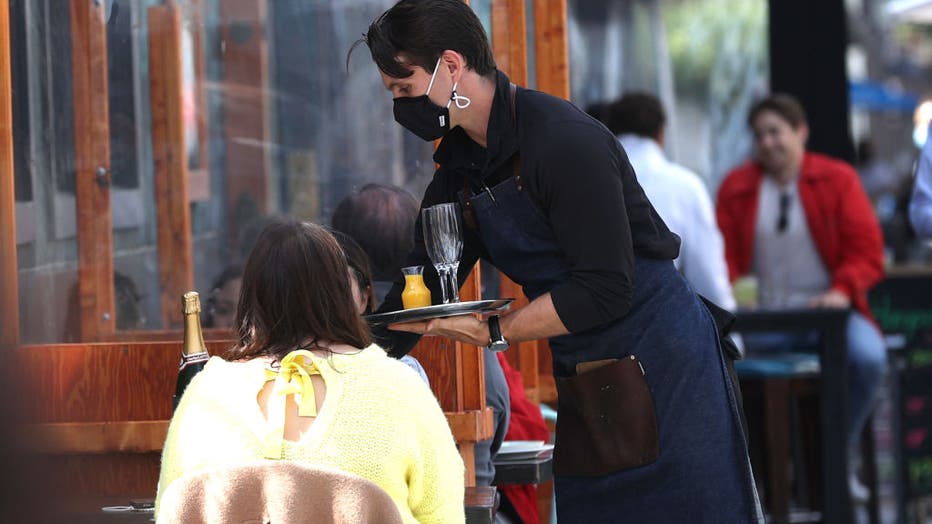 FILE - A waiter serves champagne to guests dining outside on April 2, 2021, in San Francisco, California. (Photo by Justin Sullivan/Getty Images)

Other experts have pointed to research by the National Restaurant Association Educational Foundation, which found that 82% of Gen Zers got their first work experience in a restaurant.

"If you have worked in the hospitality industry, you tend to tip better because you know what it’s like," said Diane Gottsman, a national etiquette expert and owner of the Protocol School of Texas.

Why some customers don’t leave a tip

The reason some customers may opt to not tip is that they might think the service doesn’t warrant one. Tipping expert William Michael Lynn, a professor of consumer behavior and marketing at the Cornell University, said he doesn’t tip a barista who hands him a black coffee.

"It’s like getting a coffee from McDonald’s. I just don’t see the service," Lynn told CreditCards.com, adding that it would be different if the barista whipped up a specialty drink. "If I ordered a latte, I’d tip."

The poll found that people may also cut the size of their tip for a number of reasons, including 77% saying they would reduce the amount while dining at a restaurant if the staff wasn’t friendly (56%), they had to wait too long (34%) or they didn’t get what they ordered (34%).

How much should customers tip?

Overall, the survey found that the average tip amount for dining at a sit-down restaurant was 20%, food delivery was 17% and picking up food for takeout was 15%.

Generally, a minimum of 15% to 20% is the recommended tip for a sit-down restaurant — or more for exceptional service, according to Gottsman. The standard tip for takeout food is 10% to 15% of the cost of the meal.

"It may feel like they are doing very little to bring the food to your car or door or hand you the bag of food over the counter but consider the situation. If you buy a burger and give them cash or credit card, you may opt for the customized no tip, but perhaps drop your extra change or a dollar in the tip jar," Gottsman said.

For food delivery service, she also recommends tipping a minimum 20% or $5, whichever is higher. For rideshare services or a tax, it’s recommended to leave a minimum tip of 15% and 20% or more if they help with luggage.