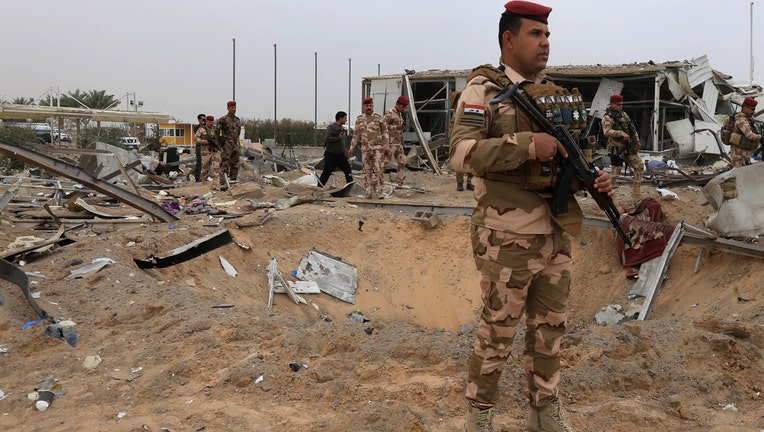 A picture taken on March 13, 2020 shows destruction at Karbala airport in the Iraqi shrine city, one of the areas targeted by US military air strikes against a pro-Iranian group in Iraq following the deaths of two Americans and a Briton in a rocket a

Dozens of rockets slammed into an Iraqi base north of Baghdad Saturday wounding 3 American and 2 Iraqi troops.

It’s the same base where 2 Americans and a British Army medic were killed in a rocket attack Wednesday prompting US airstrikes on Iranian-backed forces blamed for the attack.

A U.S. military spokesman says at least 25 rockets hit Camp Taji today in the brazen attack which occurred in broad daylight, which is rare.

On Friday, the head of U.S. forces in the Middle East Gen. Kenneth “Frank” McKenzie said Kata’ib Hezbollah was responsible for the attack Wednesday as well as 11 other attacks on U.S. forces in Iraq over the past six months.

Wednesday’s attack was the most deadly for U.S. troops since late December when an American interpreter was killed at a base in northern Iraq.  U.S. airstrikes killed dozens of Iranian-backed militants days later prompting an angry mob to attempt to storm the U.S. embassy in Baghdad.

Iran responded by launching over a dozen ballistic missiles at bases in Iraq housing U.S. troops.