A Ukrainian airplane carrying cargo with a crew of eight, crashed in northern Greece on July 16. (Credit: Yiorgos Archontopoulos via Storyful)

PALAIOCHORI, Greece (AP) - Experts investigated a cargo plane crash in northern Greece on Sunday, finding no evidence of dangerous substances but saying there’s a lot of ordnance that the plane was carrying spread around the crash site. Serbia’s defense minister confirmed that all eight crew members died in the crash.

The An-12 cargo plane from Serbia was being flown by a Ukrainian aviation crew before it smashed into fields between two Greek villages late Saturday. The plane crashed shortly before 11 p.m. about 40 kilometers (25 miles) west of Kavala International Airport.

Minutes before, the pilot had told air traffic controllers he had a problem with one engine and he had to make an emergency landing, officials said. He was directed to Kavala Airport but never made it there.

The fuselage of the Soviet-era four-engine turboprop dragged on the ground for 170 meters (nearly 190 yards) before it disintegrated. Locals reported seeing a fireball and hearing explosions for two hours after the crash. Drone footage showed that small fragments were all that is left of the plane.

Serbian Defense Minister Nebojsa Stefanovic told a news conference Sunday that the plane’s eight crew members were dead. He said the plane was carrying 11.5 tons of Serbian-made mortar ammunition to Bangladesh, which was the buyer. It had taken off from the Serbian city of Nis and had been due to make a stopover in Amman, Jordan. 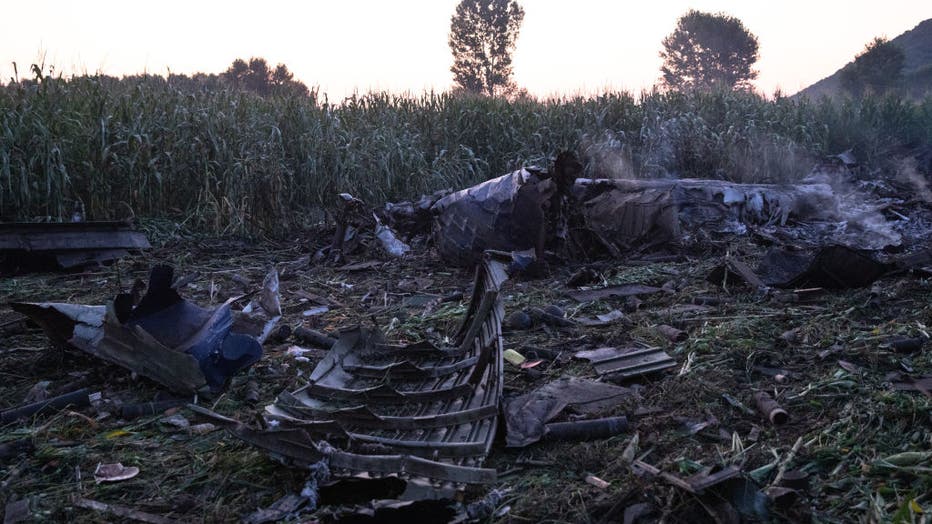 KAVALA, GREECE - JULY 17: Debris of an Antonov-12 cargo plane that crashed near Antifilippoi, Kavala, northern Greece on July 17, 2022. The plane took off from Serbia and was headed to Jordan. Initial information said the pilot requested permission t

"These were illuminating mortar mines and training (mines). ... This flight had all necessary permissions in accordance with international regulations," Stefanovic said.

The plane was operated by Ukrainian cargo carrier Meridian. The Ukrainian consul in Thessaloniki, who arrived at the crash site, told local officials that the crew were all Ukrainian.

The Greek army’s Special Joint Nuclear, Biological and Chemical Defense Unit cleared two paths Sunday for Fire Service forensics experts to move in before leaving. By sunset, that second team had retrieved all the bodies, the commander of the army’s Landmine Field Clearing Battalion told reporters.

RELATED: Guatemala returns 1st of its 21 victims from Texas trailer

Explosives disposal experts were also working at the site. It is only when their work is done that Civil Aviation Authority experts will try to retrieve the plane’s black boxes.

The fire service and police created an extended security perimeter because of the widespread ordnance. Nearby dirt roads were closed to vehicles. Firefighters who rushed to the scene Saturday night were prevented from reaching the crash site by smoke and an intense smell that they feared might be toxic.

Residents were allowed to leave their homes Sunday after being told to stay inside and keep their windows closed Saturday night. But officials told locals their fields may not be safe to work in because of the likely presence of explosives.

Nellas reported from Athens, Greece, and Gec from Belgrade, Serbia.