Saturday marked a second night of demonstrations in the District.

"I understand and feel so sad about the anger and pain that people, particularly in the Black community, are feeling. This doesn’t end. It’s every week there’s a murder by police," said Medea Benjamin, a Capitol Hill resident.

"They’re citizens like we are, but they should be held to a higher standard," Donald Smith said of police. 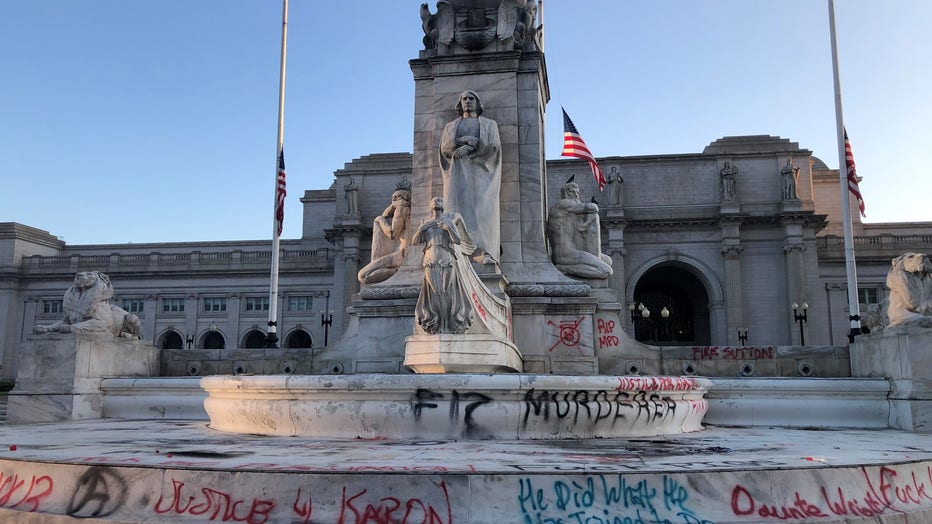 After Union Station, those marching last night reportedly moved toward Chinatown, where the arrests came.

A concerned viewer who asked not to be identified says she thought she was seeing a peaceful protest begin to disperse and left her window for a couple of minutes – only to return to screaming. She captured a firework explode.

"What I saw were all of the police who had been following the protesters down H St. to Chinatown, they had abandoned their bicycles and were rushing the protesters. And they were shoving," she said.

D.C. Police say there was a skirmish with protesters as officers moved in while some marched in the Chinatown area.

Police confirmed that 28-year-old Steve Chang (of no fixed addressed), 51-year-old Michael Klaus, of Alexandria, VA, and 25 year-old Adam Cunningham, of Capitol Heights, MD, were arrested for Possession of a Destructive Device and Assault on a Police Officer.

We’re told the "Destructive Device" charges come from the three found to be in possession of fireworks.

A 15-year-old actually did throw a firework toward police, according to an MPD spokesperson, who said the teen was also found with an axe and laser.

This comes as the city continues preparations in anticipation of a Derek Chauvin trial verdict this week. FOX 5 confirmed the Mayor’s National Guard request, which includes 300 guard members ready to go at the D.C. Armory should D.C. police need more support.

The city is telling business owners to be prepared for intermittent street closures (none were announced as of Sunday) and to follow police alerts as well as report any known business threats to police.

A managing partner of the restaurant group "Proper 21," which now has two restaurant in the District, says other business owners are trying to remain hopeful.

Steve Forbes told FOX 5 he is not planning to board-up in anticipating of Chauvin trial protests.

"I think we’re going to get some closure next week. Hopefully it’s the closure that everybody’s hoping for. Hopefully everyone’s in that headlining mentality. And quite frankly, we can’t afford to board up," said Forbes.

A police memo obtained by FOX 5 also stated that D.C. police will be in an "all hands on deck" mode -- with all days off cancelled and all officers working 12-hour shifts, starting on Monday.