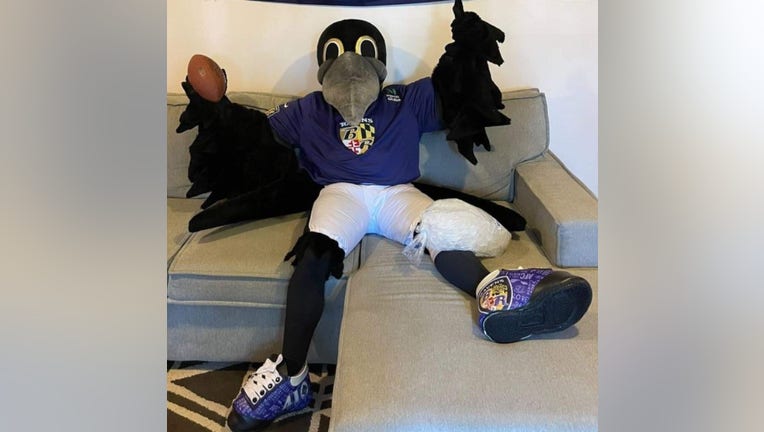 BALTIMORE, Md. - Poe, the Baltimore Ravens mascot, has been placed on the injured reserve list after sustaining an injury to his drumstick, Head Coach John Harbaugh announced Thursday.

Harbaugh said Poe will not be able to perform for the rest of the season, and that the team is looking for a replacement. "We're going to go to work on that right away. We're going to turn over every stone, scour everywhere. We'll find his replacement," Harbaugh told reporters. "We're going to get right into evaluating our options, see where we go next, and see if we can find somebody to replace Poe."

Harbaugh burst into laughter after the announcement, however, it's unclear whether the person inside the suit actually suffered an injury.

Poe was tackled by a youth football player Saturday during the Mascot Classic, which took place during halftime of the Ravens preseason game against the Washington Commanders. At the time, he was carted off the field by the team's medical staff. Initial reports mentioned Poe tearing his ACL.

The Ravens tweeted that he was "resting comfortably in his perch awaiting further test results," after the game.

Linebackers Vince Biegel, and DAvid Ojabo plus tight end Charlie Kolar, are also currently on the Ravens injured reserve list. The Ravens are set to face the New York Jets Sunday, Sept. 11 when the team's NFL regular season kicks off.