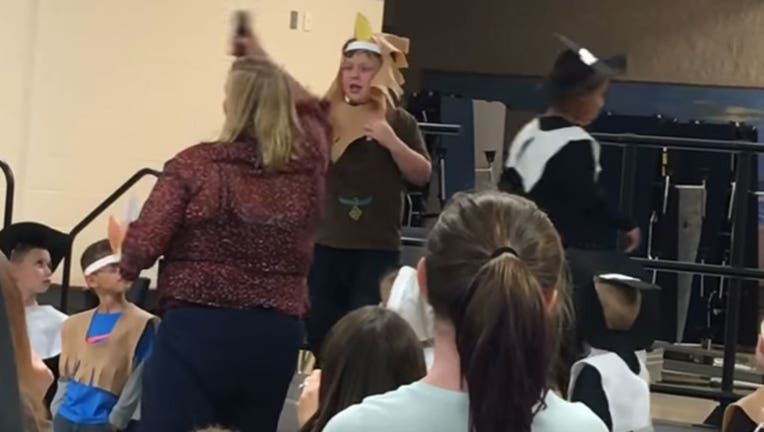 NEW YORK (FOX 5 NY) - An autistic six-year-old boy in West Virginia was brought to tears when a teacher grabbed the microphone he was about to speak into while on stage during a Thanksgiving play on Tuesday.

Caleb's parents posted video of the incident on social media and the clip has gone viral.

Children in costumes approach the mic one by one to thank the audience and wish them a happy Thanksgiving. When it comes time for Caleb to speak, a woman is seen yanking the mic from its stand.

"I left in tears because one teacher Mrs. Linsey I think her name is grabbed the microphone from Caleb and in a mean way," wrote Amanda Riddle. "My son is a little different I know this but his heart is so big and he loves everyone. What does it matter if he wanted to say gobble gobble he was the turkey after all. I'm sick of kids that are not considered "normal" be treated the way they are."

Comments about the video have been overwhelmingly supportive of the boy and critical of the behavior of the teacher towards a child with autism.

Harrison County Schools Superintendent Dr. Mark Manchin told 5 News: "It's a mistake that was made. There was no malice. This teacher, as all of our teachers, truly care about these young boys and girls. The program was over, at least as I understand, and the teacher had taken the microphone."

Riddle later shared video of Caleb saying "Thanks for the support. Gobble, gobble, gobble." along with the hashtag "#TeamGobbleGobble."