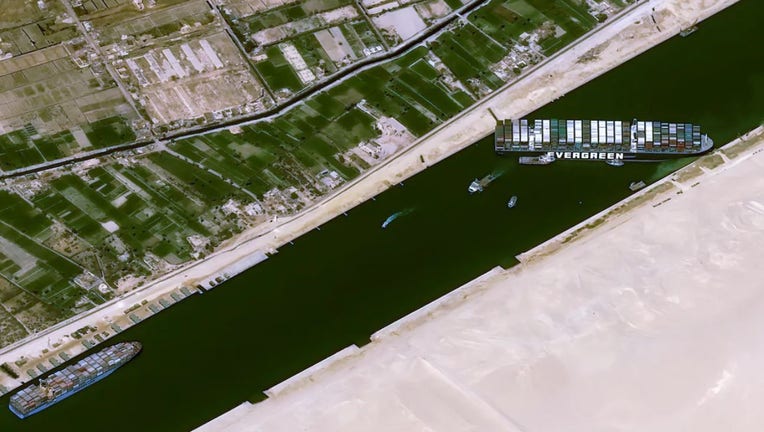 The cargo ship MV Ever Given stuck in the Suez Canal near Suez, Egypt, Thursday, March 25, 2021. (Cnes2021, Distribution Airbus DS via AP)

Suez Canal authorities are prepared to try new tactics in order to free a massive ship that has been lodged in the 300-foot-wide, man-made waterway since Tuesday.

The MV Ever Given, a cargo ship the size of a skyscraper that's registered in Panama, got stuck between the canal's eastern and western walls on Tuesday.

Peter Berdowski, CEO of Boskalis, the salvage firm hired to extract the Ever Given, said the company hoped to pull the container ship free within days using a combination of heavy tugboats, dredging and high tides.

He told the Dutch current affairs show "Nieuwsuur" on Friday night that the front of the ship is stuck in sandy clay, but the rear "has not been completely pushed into the clay and that is a positive because you can use the rear end to pull it free." 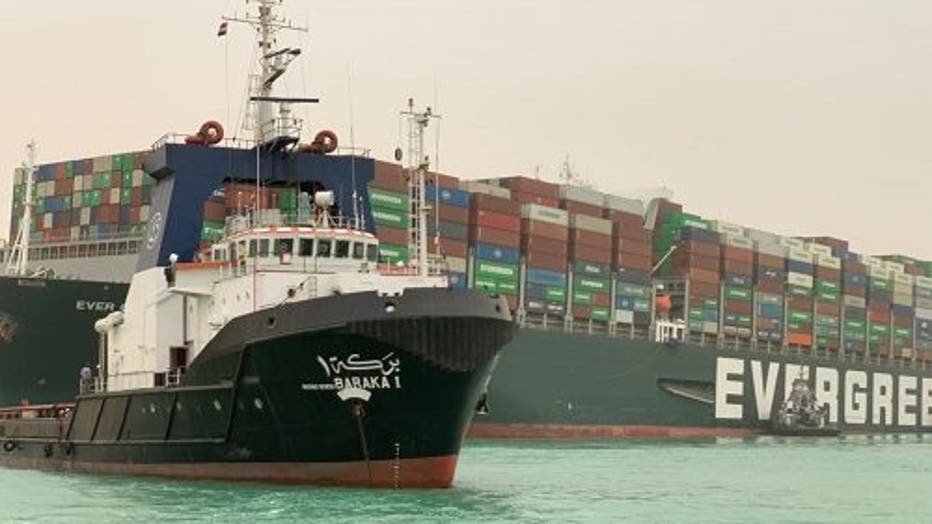 The Ever Given, a Panamanian skyscraper-sized vessel, turned sideways on Tuesday, becoming wedged in the Suez Canal. (Credit: Suez Canal Authority via Storyful)

Berdowski said two large tugboats were on their way to the canal and are expected to arrive over the weekend. He said the company aims to harness the power of the tugs, dredging and tides, which he said are expected to be up to 20 inches higher Saturday.

"The combination of the [tug] boats we will have there, more ground dredged away and the high tide, we hope that will be enough to get the ship free somewhere early next week," he said.

A Pentagon spokeswoman confirmed to Fox News on Friday that the U.S. Navy will also be assisting efforts to free the Ever Given.

"We have offered, and stand ready to assist Egypt, and will look to support any specific request we receive," Cmdr. Jessica L. McNulty, a Pentagon spokeswoman, said in an email to Fox News. "We continue to monitor and assess the situation, but have nothing to provide on any potential specific support at this time."

The Suez Canal Authority (SCA) said in a Friday statement that it "values the offer of the United States of America to contribute to these efforts, and looks forward to cooperating with the U.S. in this regard in appreciation of this good initiative which confirms the friendly relations and cooperation between the two countries."

The SCA told The Associated Press that the authority planned to make at least two attempts Saturday to free the vessel when the high tide goes down. The official spoke on condition of anonymity because he was not authorized to brief journalists. Egyptian authorities have prohibited media access to the site.

The blockage in the canal, which provides a transportation route for about 13% of global trade, could cost between $6 billion and $10 billion in global trade, according to a study from German financial services company Allianz published Friday.

More than 50 vessels pass through the Suez every day, transporting 1.9 million barrels of oil daily and 1.2 billion pounds of cargo annually, according to shipping news website Lloyd's List, and there could be more than 150 ships that are backed up as a result of the congestion. 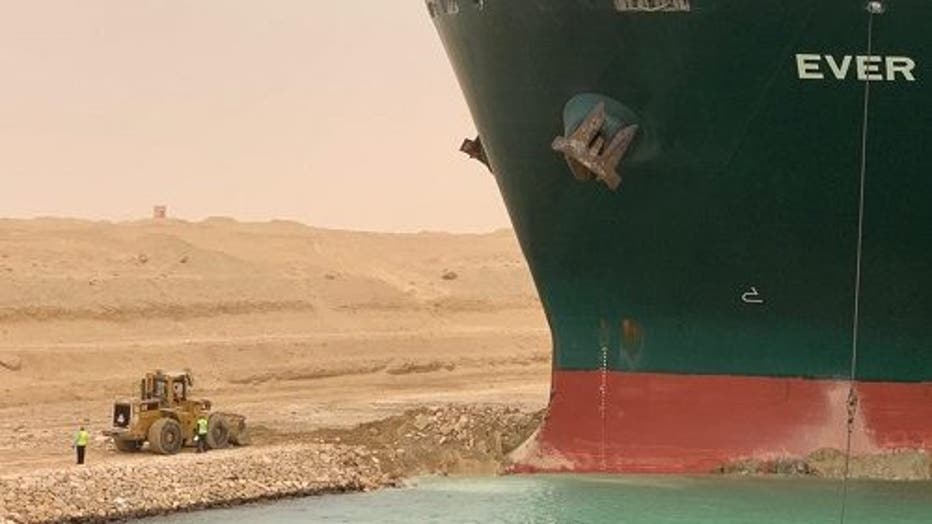 A number of vessels have been redirected to travel around Africa to Europe.

Supply chain and trade experts have expressed concerns that the blockage could create a spike in prices for oil and other goods like coffee and consumer electronics.

The blockage is not expected to affect liquified natural gas prices as much as a Panama Canal traffic jam that occurred in January.

Volatility in crude prices has ramped up over the past 24 hours with West Texas Intermediate Crude closing up more than 4% Friday after spiking above $60 per barrel on Wednesday.

Phil Flynn, senior energy analyst at The PRICE Futures Group, and a FOX Business contributor, notes the timing of the Suez snafu is not great.

"The delays in oil shipment come at a critical time for the U.S. energy industry that is counting on oil and gasoline supplies to replace lost barrels that were incurred during the recent Texas power outages. U.S. gasoline supplies have fallen in recent weeks as U.S. demand is rising. U.S. refiners really need to increase production as the summer driving season is just around the corner," he wrote.