Shortly after, firefighters arrived and began an offensive battle, an explosion was reported and multiple buildings became involved, leading crews to go into a defensive fight, Scott said.

"There was a significant explosion that caused a mayday report,'' Scott explained. "This was upgraded to a major emergency category.''

The explosion and fire are under active investigation by the LAFD's arson and counter-terrorism unit, and the criminal conspiracy section of the Los Angeles Police Department's Major Crimes Division, fire department spokesman Nicholas Prange said.

Prange told City News Service that carbon dioxide and butane canisters were found inside the building but it's unknown if they contributed to the explosion.   "The investigation is in its preliminary stage right now," Prange said. "So there are no details that can be reported yet."

Some of the firefighters suffered "obvious damage and burns'' in the explosion and were taken to a hospital for treatment, he said. Three of them are in critical condition, their injuries are non-life threatening.

Boyd Street in DTLA is closed down indefinitely while a multi-agency investigation continues into Saturday night's huge fire and explosion.

As of Sunday morning, three firefighters have been discharged from Los Angeles County+USC Medical Center. Eight remain hospitalized, including two in critical, but stable condition.

Dr. Marc Eckstein, medical director for LAFD and a physician at the center, said 11 firefighters would remain at the hospital overnight for observation and all were expected to survive their injuries. A 12th firefighter was treated and released at the emergency room that night for a minor extremity injury.

More than a dozen firefighters recovering after explosion at downtown building

"This has been a very difficult situation,'' Scott said, noting that he would provide the community with updates as soon as possible.

Eckstein said they all arrived at the hospital awake and alert, but two firefighters were put on ventilators due to smoke inhalation and four were sent to the intensive care unit for burns. Most of the burns, he said, were on their upper extremities.

"All are stable at this time,'' the doctor said.

Mayor Eric Garcetti said, "The good news is that everybody is going to make it,'' but he added, "We have a lot of firefighters who are shaken up.''

LAFD Chief Ralph M. Terrazas said the mayday call, which is used only when a firefighter is "down, missing or trapped,'' was "the kind of call I always dread.''

He said the injured men, who were from Engine No. 9, realized something was wrong when they were inside the building but could not escape in time to avoid the blast. Their fire engine parked outside was charred, and the aerial ladder was damaged -- with eyewitnesses saying firefighters on that ladder climbed down with their coats on fire. 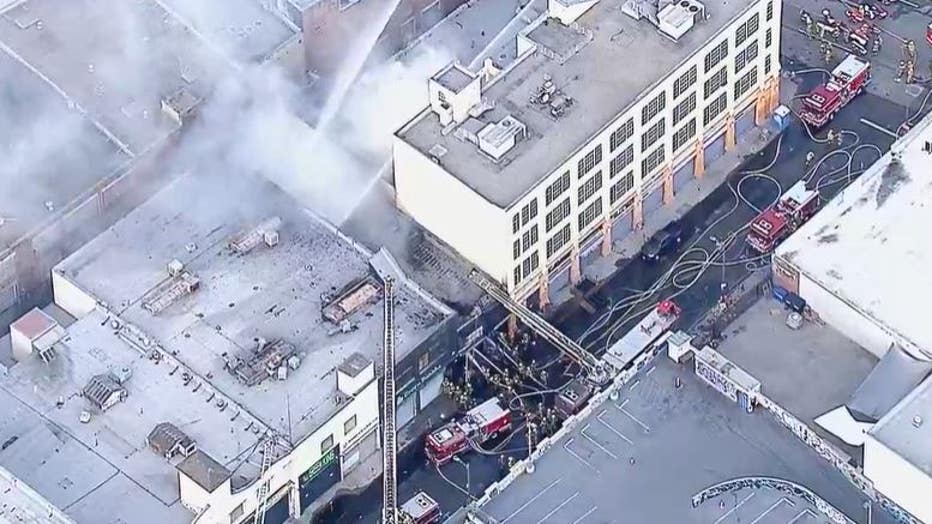 Knowing that some were injured, Terrazas said many other firefighters from the scene were traumatized by the event.

"When one of your own is injured ... you can imagine the amount of mental stress,'' he said.

Multiple ambulances and fire companies were called to the scene, and a medical treatment area was established just east of the building, which Scott said was Smoke Tokes Warehouse Distributor, calling the business "a supplier for those who make butane honey oil.''

Flames and billowing smoke spread from the first narrow building that caught fire to other neighboring one-story businesses. The fire truck was blackened and some firefighting equipment was damaged, including an aerial ladder.

Over 230 firefighters responded, including those involved in treating and transporting injured firefighters.

FOX 11 has also learned that this is the second fire at the location and tried to contact the owner, who as of this writing, has not been implicated in any wrongdoing.

For the near future, pending the investigation, a three-block radius around the intersection of San Pedro and Boyd Streets is completely off-limits. If your work in the area, keep that in mind, as they will most likely not let you in.

The investigation is being conducted by the Los Angeles Police Department and the Bureau of Alcohol, Tobacco, Firearms and Explosives.