Rewriting the rules for therapy dogs in school

Should therapy dogs be allowed in schools to give kids emotional support? A Maryland state delegate is pushing to require boards of education to do so.

A Maryland State delegate is pushing a bill that would require state public schools to allow therapy dogs.

Del. Guyton pointed to reports showing positive impacts when why asked. In one study, Guyton says reading levels increased from 15% to 30% when a therapy dog was introduced. A UCLA Health’s Animal-Assisted Therapy Research report said, “The simple act of petting animals releases an automatic relaxation response.”

“[It] doesn’t only make kids and teachers feel better, uh it lowers anxiety and depression, makes them more likely to want to come to school,  but it has some real … benefits as well as and right now, we’re trying to pass so much legislation for um, for education reform, it makes sense for us to utilize these low to no cost options that we know have an effect,” said Delegate Guyton.

Montgomery County Public Schools, for example, has a policy that permits people with disabilities to be accompanied by their service animal, but I’m told “therapy” dogs are not included in the definition. And other school systems have restrictions like this.

“Animals are great to assist in all different kinds of emotional settings so this would be a great addition,” said Burton Goldstein who does public relations for – and is a handler for two therapy dogs. 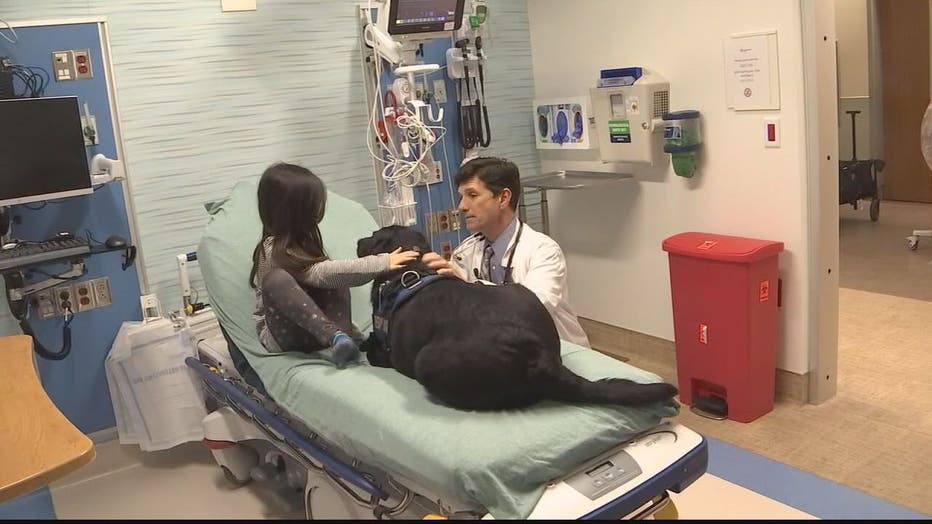 Goldstein is with the National Capital Therapy Dogs non-profit and has gone with his two 9-year-old Shiatsus, a brother and sister named Emma and Bear, to schools in D.C. They were just visiting child cancer patients at the NIH and are visiting state leaders who are addressing Coronavirus in the area.

Goldstein expressed cautious optimism about allowing therapy dogs into public schools. He still had many questions including who issues the certification, what type of setting is involved? Does this include a one-on-one setting like is done in R.E.A.D. programs, where the student reads to the dog – or does the whole class get to be with the dog?

“The real question is, what is a service, a certified therapy dog. And I would recommend looking at the list that the AKC has put together under who qualifies,” said Goldstein.

Guyton also says allergies is something that needs to be considered. These details are not exactly outlined in the bill. FOX 5 was told the main goal is to get Therapy Dogs the permission to be in schools. We’re told it would be up to the boards of education or principals to decide guidelines.

Eight other state legislators are supporting the bill. Two are Republicans.