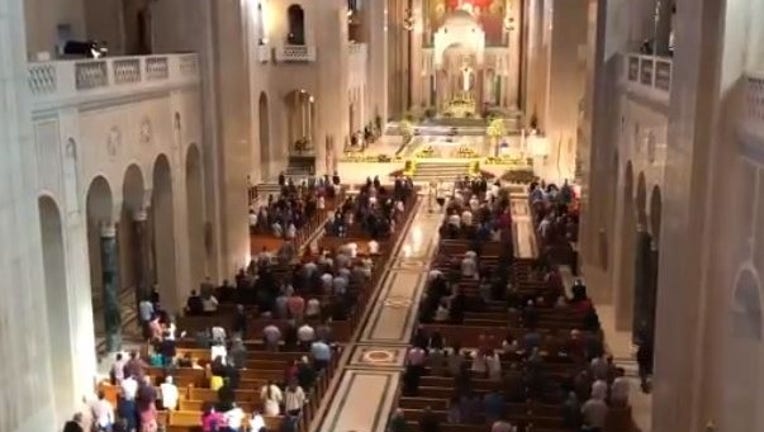 The scene inside the Basilica of the National Shrine of the Immaculate Conception in D.C. (FOX 5 DC / Stephanie Ramirez)

WASHINGTON - For the first time since 2019, many Christians got to celebrate Easter Sunday service inside their church instead of on a couch at home.

Northeast D.C.’s Basilica of the National Shrine was among the houses of worship that opened doors that were closed last year due to the coronavirus pandemic.

One of, if not the largest, Catholic churches in the country – the Basilica would normally see around 10,000 worshippers around Resurrection Day.

People would pack the standing-room only area, crowds for Mass were so large.

This year, the Basilica was not as packed, but at least 1,000 people, masked and socially distanced, were allowed inside. Some tell FOX 5 they left with hope.

"It’s a different feeling today, right? We feel like we’re almost home in terms of being pandemic free," said Julia Omotade, a Eucharistic Minister in the D.C. area for over 30-years.

She like many others couldn’t celebrate Easter Sunday service inside the Basilica last year.

Joanna Santiano came from Woodbridge, VA. It was her first trip to the Basilica and first Easter Mass back inside the Church since 2019.

"I wanted it to be a full-on celebration of Jesus’ rising. So this is one of the ways. This is a magnanimous, glorious facility and it was open," said Santiano. "What a year a difference makes in celebrating Easter. This is what it’s all about. Coming here, getting together with the community, the neighbors and just praising the Lord and Jesus has risen."

Safety measures also included workers wiping-down every pew after each service on Sunday. Ushers directed people to leave in sections instead of all at once to help maintain safer distances.

The Washington Archdiocese had sued the District over capacity limits closer to Christmas time.

Prior to that, the Basilica’s spokesperson says they were only allowed 50-people inside.

Now on Easter, the Basilica opened doors to at least 1,000 people, who had to pre-register for a ticket for contact tracing. Masks covering the full face and nose were required.

He told FOX 5 then, th church felt like a tomb.

"Churches are beautiful places, they’re wonderful buildings. But they come to life when people are in them," Monsignor Walter Rossi.

The Monsignor tells FOX 5, in the Church they say Easter brings new life. Many agreed they felt that on this Easter Sunday.

"It was so moving. It meant so much more, I think, because of what we’re going through," said Sandy Devlin, of Pittsburgh, PA.