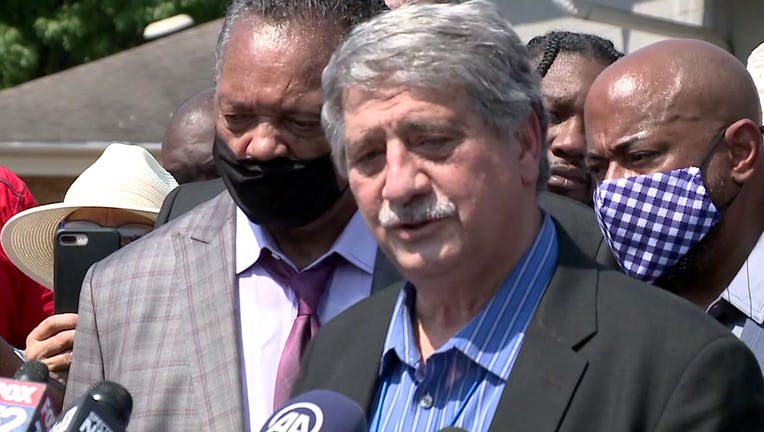 The mayor of Kenosha, Wis., is resisting calls for the police chief and sheriff to resign in the wake of the Jacob Blake shooting.

Mayor John Antaramian is backing Police Chief Daniel Miskinis, despite controversial comments by Miskinis suggesting that people out after curfew are to blame for a shooting that left two protesters dead and another wounded.

"The curfew's in place to protect," Miskinis told reporters just hours after the Wednesday incident, which occurred during protests over the police shooting of Blake, a 29-year-old Black man.

If people hadn't violated the curfew, "perhaps the situation that unfolded would not have happened," the chief said.

Miskinis walked back the comments Friday, claiming they were "misconstrued" and expressed sympathy for the deaths of Anthony Huber and Joseph Rosenbaum.

The responsibility for their deaths "rests solely on the person who did that, not on the victims of this crime," Miskinis said.

Antaramian defended law enforcement officials Friday, saying "everyone is doing the best they can" in the face of days of rioting.

On Thursday, the American Civil Liberties Union demanded that Miskinis and Kenosha County Sheriff David Beth be fired following the Blake shooting, which was captured in a video that has since gone viral.

The cellphone video shows Kenosha Police Officer Rusten Sheskey and another officer following Blake with their guns drawn as he walked around the front of a parked SUV following a reported domestic dispute.

According to police officials, the officers were sent there because of a complaint that Blake was attempting to steal the caller’s keys and vehicle. Officials said officers were aware that Blake had an open warrant for felony sexual assault before they arrived.

Blake had a knife in the vehicle, according to authorities. Officers shot him in the back seven times. He is now paralyzed, his family says.