The wailing baby seen in widely-circulated photos and videos being handed over a barbed wire fence to an American soldier at the Kabul airport has been reunited with her family and is now living happily in Arizona, according to local outlets.

Her father Hameed, who was only identified by his first name for security reasons, was inside the perimeter of Hamid Karzai International Airport when he spotted his wife and newborn amid the mass of people trying to flee Afghanistan, azfamily.com reported.

"That day I handed over my baby to a total stranger," he told the outlet. "The only thing I trusted is that he was a Marine, and that my daughter would be safe."

Marines were filmed plucking the baby from her dad’s arms and lifting her over the barbed wire to safety in a heartbreaking moment that grabbed the world’s attention amid the U.S. evacuation from the Taliban-controlled country.

The family, including mom Sadia and 8-week-old Liya, is now safe and comfortable staying with friends in the Phoenix area, according to the outlet.

Hameed, a five-year Afghan ally who worked in Kabul as a linguist and cultural adviser for military officials, said he spent the entire month of August in the Kabul airport assisting the U.S. with evacuations.

During that time, the first-time dad was kept in a secure area and missed the birth of his daughter.

His wife had a difficult delivery but worked up the strength to flee her home as the Taliban approached the capital. By Aug. 12, Hameed said, it was clear they would have to leave.

"We got intel that people were getting killed, or going missing. By my affiliation [with the military], I knew my home would be next. It wasn’t a matter of ‘if,’ but ‘when,'" he told the outlet.

On Aug. 19, Sadia grabbed her identification documents, some cash and a few belongings, and headed to the airport with Liya, then just 16 days old.

At a checkpoint, the Taliban seized all of Sadia's belongings before she and her baby joined the chaos outside the small airport gate. Hameed said he was able to see them from his side of the fence.

"They were using water cannons and flashbangs to control the crowd. Every time a bang went off, I could see my daughter start screaming and crying. I couldn’t do anything to help," Hameed told azfamily.

He watched the Taliban beat people in the crowd as people came through the gates with broken limbs and other severe injuries.

"I knew she’d never make it through. She’d be crushed to death, God forbid, or severely injured," Hameed said. 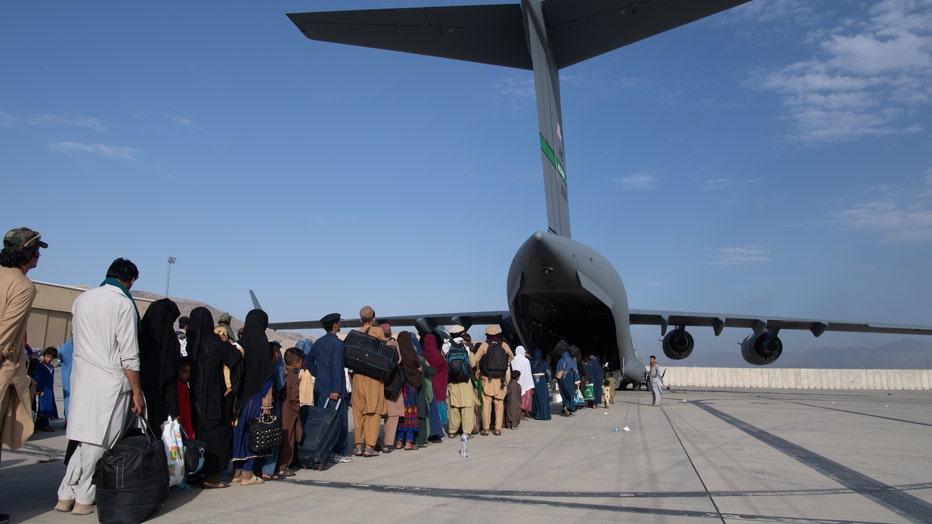 Desperate, Hameed pointed out his baby to a nearby Marine and asked if he could help her get over.

"He told me the only thing he could do was lift her over the barbed wire, but he said she’d be hurt," the dad recalled. "I told him I’ll take the chance. I’d rather her get hurt than die."

In the now-iconic photo, Hameed can be seen holding down the Marine’s legs as he reaches over the wire and grabs the baby, handing her to Hameed.

This was the first time the father ever held his daughter. Two minutes later, he was forced to return to work with the evacuations, the report said.

Sadia, still on the other side of the fence, had collapsed from heat exhaustion, but was able to make it through the gate hours later, according to the outlet.

The family was put on a flight bound for the U.S. with other refugees later that day.

Hameed told azfamily that he had no clue how impactful the images of Liya had been around the world.

"I think it was very captivating to see what was actually happening. It’s one thing for politicians to go on TV and say how fine things are. It’s totally something else on the ground, and when you can see it with your own eyes," he said.

Though they are now safe, the family was left without any forms of ID. Sadia and Liya also need medical care, but Hameed is unable to take them to see a doctor without insurance, the report said.

The dad set up a GoFundMe account to help his family get on their feet as they start their new life.

He said he hopes to one day meet the Marine who helped Liya.

"Oh my God. I’d give him a hug. He literally saved my daughter’s life," Hameed told the outlet.