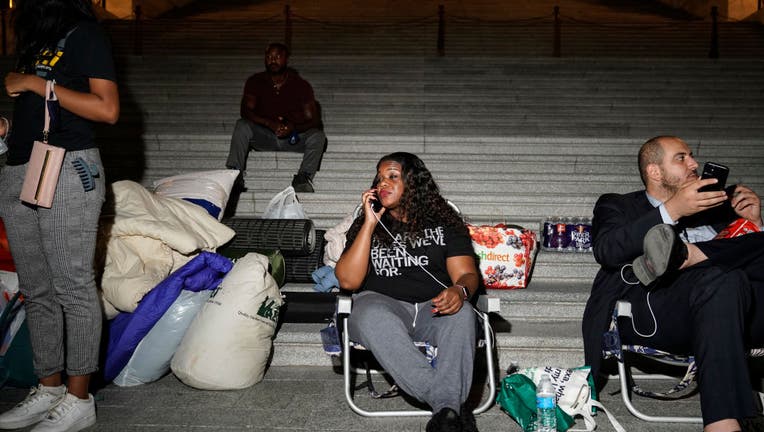 WASHINGTON, DC - JULY 31: Rep. Cori Bush (D-MO) speaks with supporters as she spends the night outside the U.S. Capitol to call for for an extension of the federal eviction moratorium on July 31, 2021 in Washington, DC. The eviction moratorium, which

As anger and frustration grew as the clock ticked closer to the expiration of the nationwide eviction moratorium, one Democratic lawmaker camped outside the U.S. Capitol in protest.

"I don’t plan to leave before some type of change happens," said Rep. Cori Bush, D-Mo.

She posted a photo of herself outside the building with fellow Democratic Reps. Ayanna Pressley of Massachusetts and Ilhan Omar of Minnesota. She said she had written to other Democratic lawmakers, inviting them to join her on the stairs, too.

"I don’t want anyone else to have to go through what I went through, ever," said Bush, wiping away tears during an interview at the Capitol, where dozens had joined her protest.

Bush experienced homelessness as a young mother of two in her 20s and has said that, at the time, she was working a low-wage job.

"I don’t care what the circumstances are and so I’m going to fight now that I’m in a position to be able to do something about it," the now-45-year-old said.

Earlier she tweeted, "Many of my Democratic colleagues chose to go on vacation early today rather than staying to vote to keep people in their homes. I’ll be sleeping outside the Capitol tonight. We’ve still got work to do."

On Friday, House Majority Leader Steny Hoyer tried to pass a bill to extend the deadline beyond July 31, but it was rejected by Republicans. The House then adjourned for August recess.

The Senate convened Saturday in a rare weekend session to continue debating the massive infrastructure bill, though the looming expiration was still a topic of discussion.

"We are only hours away from a fully preventable housing crisis," said Sen. Elizabeth Warren, D-Mass., during a floor speech.

"We have the tools and we have the funding," she continued. "What we need is the time."

The Biden administration announced Thursday it would allow the ban to expire Saturday at midnight, arguing that its hands are tied after the Supreme Court signaled the moratorium would only be extended until the end of the month.

While the White House said President Joe Biden would have liked to extend the moratorium due to the spread of the highly contagious delta variant, Biden on Thursday called instead on "Congress to extend the eviction moratorium to protect such vulnerable renters and their families without delay."

Lawmakers said they were blindsided by Biden's inaction, some furious that he called on Congress to provide a last-minute solution to protect renters that they were unable to deliver.

More than 3.6 million Americans are at risk of eviction, some in a matter of days.

New Yorkers experiencing financial hardship during the Coronavirus pandemic have been protected against being evicted.That could change on Aug. 31 if the statewide eviction moratorium comes to an end.

The moratorium was put in place by the Centers for Disease Control and Prevention as part of the COVID-19 crisis when jobs shifted and many workers lost income.

The ban was intended to prevent further virus spread by people put out on the streets and into shelters. It’s credited with keeping 2 million people in their homes over the past year as the pandemic battered the economy, according to the Princeton University’s Eviction Lab.

Eviction moratoriums will remain in place in New York, New Jersey, Maryland, Illinois, California and Washington, D.C., until they expire later this year.

Elsewhere, the end of the federal moratorium means evictions could begin Monday, leading to a years' worth of evictions over several weeks and ushering in the worst housing crisis since the Great Recession.

Parts of the South and other regions with weaker tenant protections will likely see the largest spikes, and communities of color, where vaccination rates are sometimes lower, will be hit hardest. But advocates say this crisis is likely to have a wider impact than pre-pandemic evictions, reaching suburban and rural areas and working families who lost their jobs and never before experienced an eviction.

The crisis is also expected to get worse in September when the first foreclosure proceedings are expected to begin.

An estimated 1.75 million homeowners — roughly 3.5% of all homes — are in some sort of forbearance plan with their banks, according to the Mortgage Bankers Association. By comparison, about 10 million homeowners lost their homes to foreclosure after the housing bubble burst in 2008.

Congress approved nearly $47 billion in federal housing aid to the states during the pandemic, but it has been slow to make it into the hands of renters and landlords owed payments.

The day before the ban was set to expire, Biden called on local governments to "take all possible steps" to immediately disburse the funds.

"There can be no excuse for any state or locality not accelerating funds to landlords and tenants that have been hurt during this pandemic," he said in a statement late Friday.

Some places will see a spike in people being evicted in the coming days, while other jurisdictions will see an increase in court filings that will lead to evictions over several months.