DENVER - While legislators craft the details back in Washington, President Joe Biden is pitching his massive domestic spending package with a visit to a renewable energy lab in Colorado to highlight how the investments in clean energy in his plan would help combat climate change.

The trip to the National Renewable Energy Laboratory in Denver will cap off the president’s two-day swing to the West, and offer Biden the chance to continue linking the need to pass the spending package to the urgent threat posed by climate change. Biden spent Monday in Boise, Idaho, and Sacramento, California, receiving briefings on the devastating wildfire season and viewing the damage by the Caldor Fire to communities around Lake Tahoe.

"We can’t ignore the reality that these wildfires are being supercharged by climate change," Biden said, noting that catastrophic weather doesn’t strike based on partisan ideology. "It isn’t about red or blue states. It’s about fires. Just fires."

During both of his Monday stops, Biden held out the wildfires across the region as an argument for his $1.2 trillion bipartisan infrastructure bill and additional $3.5 trillion package of spending. The president said that every dollar spent on "resilience" would save $6 in future costs. And he made the case that the rebuilding must go beyond simply restoring damaged systems and instead ensure communities can withstand such crises.

"These fires are blinking ‘code red’ for our nation. They’re gaining frequency and ferocity," Biden said after concluding his tour of the Caldor Fire damage. "We know what we have to do." 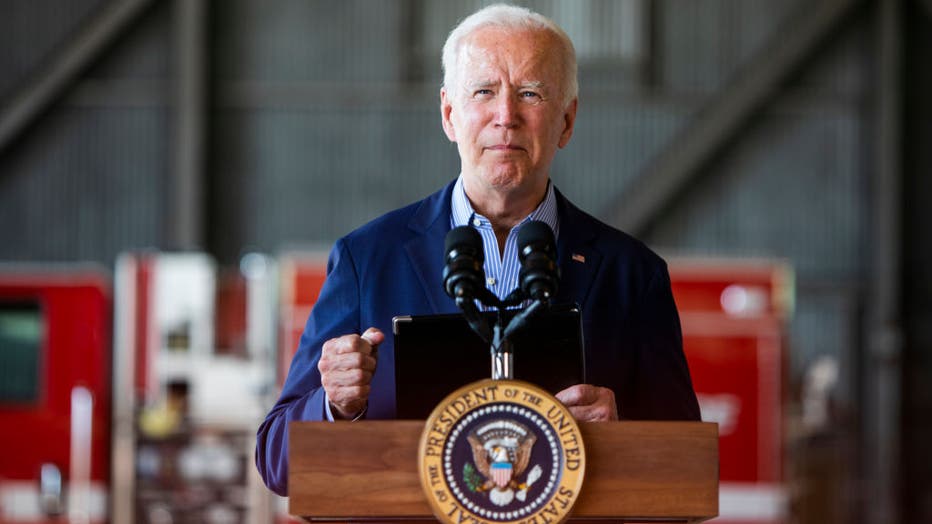 The climate provisions in Biden’s plans include tax incentives for clean energy and electric vehicles, investments to transition the economy away from fossil fuels and toward renewable sources such as wind and solar power, and creation of a civilian climate corps.

Biden has set a goal of eliminating pollution from fossil fuel in the power sector by 2035 and from the U.S. economy overall by 2050.

While in California, Biden also campaigned for Democratic Gov. Gavin Newsom, who is facing a recall election Tuesday. Speaking at a rally in Long Beach, Biden framed the recall as a battle against "Trump Republicans trying to block us from beating this pandemic" and characterized Newsom's leading Republican opponent as "another Trump climate denier."

The president’s two-day Western swing comes at a critical juncture for a central plank of his legislative agenda. Lawmakers on Capitol Hill are working to assemble details of the infrastructure-plus plan — and how to pay for it, a concern not just for Republicans.

Besides unified Republican opposition in Congress, Biden needs to overcome the skepticism of two key centrist Democrats in the closely divided Senate. Joe Manchin of West Virginia and Kyrsten Sinema of Arizona have expressed concerns about the size of the $3.5 trillion spending package.

RELATED: Senate’s $3.5T budget: What you need to know

Manchin said Sunday, "I cannot support $3.5 trillion," citing his opposition to a proposed increase in the corporate tax rate from 21% to 28% and vast new social spending envisioned by the president. Manchin also complained about a process he said feels rushed.

In California, Biden appeared to respond to those concerned about the plan’s size, saying the cost "may be" as much as $3.5 trillion and would be spread out over 10 years, a period during which the economy is expected to grow. He also insisted that, when it comes to addressing climate change, "we have to think big."

"Thinking small is a prescription for disaster," he said.

President Joe Biden renewed his call to combat climate change after he toured the devastation of the wildfires in the Western U.S.

The 100-member Senate is evenly split between Democrats and Republicans. Given solid GOP opposition, Biden’s plan cannot pass the Senate without Manchin's or Sinema’s support.

The White House is trying to turn the corner after a difficult month dominated by a chaotic and violent U.S. withdrawal from Afghanistan and the surging delta COVID-19 variant that have upended what the president had hoped would mark a summer in which the nation was finally freed from the coronavirus.

Biden acknowledged his polling numbers have dipped in recent weeks, but argued his agenda is "overwhelmingly popular" with the public. He said he expects his Republican opponents to attack him instead of debating him on the merits of his spending plan.