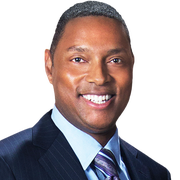 His career started while he was a sophomore at Jackson State University. His first job in TV news was running the teleprompter on the weekends at WAPT news. From there he worked his way up to news photographer, editor and sports reporter for the weekend shows, before graduating.

After leaving Jackson, he became a news and sports reporter/anchor at KSEE in Fresno, California; WRAL in Raleigh, North Carolina (Go Tar Heels!), weekend anchor at CNN in Atlanta; and anchor/reporter at WKRN in Nashville Tennessee.

During his time in Washington, Martin has covered several big stories including reporting live for several days in New Orleans in the aftermath of Hurricane Katrina, reporting live in Miami on the murder of Washington Redskins football player Sean Taylor, and was the first reporter live on the scene of FOX 5's award-winning coverage of the serial bank robberies in D.C.

When not at work, wisdom spends time with his wife and 3 young kids. He enjoys working out, cooking, speaking at different schools and coaching kid’s basketball and baseball in the area.