VIDEO: Spirit Airlines employee gets into fight with traveler at DFW Airport

A Spirit Airlines employee got into an argument with a traveler that got out of control at DFW Airport. The fight apparently started over a problem with seating on a flight.

DALLAS - Spirit Airlines said it suspended an employee who got into an argument with a traveler that got out of control at DFW Airport.

Airport police were not on the scene while the fight was happening, but they are investigating. They took a report based on the accounts of the two people involved, plus witnesses who recorded video.

The fight apparently started over a problem with seating on a flight.

No one was taken into custody as both parties were released from the scene after being interviewed. So far, no one has been officially charged.

Video of the confrontation has now been viewed by millions.

A Spirit Airlines employee got into an argument with a traveler that got out of control at DFW Airport.

Video shows them both on the ground shortly after she yelled a series of homophobic slurs at him, shoved him and then hit him inside DFW International Airport Thursday.

"I am at the Panda Express, and we hear yelling, and I drop my food. And my instinct is to pull out the camera and start recording," recalled Thomas Shannon.

The professional photographer was the person behind the camera, and he was unsure what sparked the argument.

"How did we get here? Why do we think this is ok?" Shannon added.

According to a DFW Airport police incident report released Friday, the female passenger from Fort Worth became angry during the boarding process.

The Spirit employee told the airport police the woman got off a plane complaining there wasn’t a seat for her. He said he asked the woman to get in line with the gate agent, but witnesses said the woman cut in front of others and became uncooperative.

It escalated further when police said the supervisor tried to take her boarding pass. Another passenger tried to separate the two.

Video shows the woman reaching around the other passenger a few times, hitting the employee in the face. That’s when the Spirit employee rushed her. They both fell to the ground.

Police said she fell while attempting to run after hitting him, tripping over a chair. Once they got up, the employee put his hands on the woman.

The woman told police she didn’t do anything, claiming the employee pushed her for no reason before the cameras rolled.

Police spoke with both of them after the incident. There was no security present. 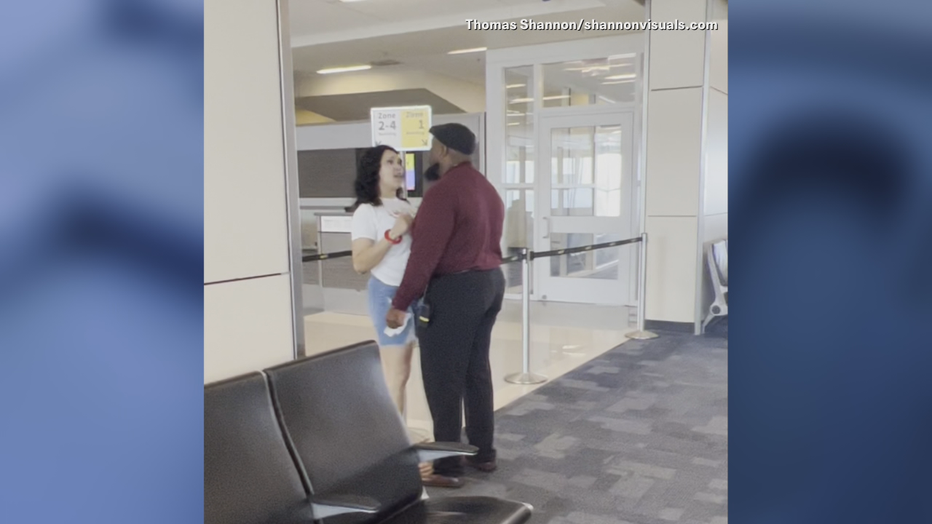 The officer who filled out the report suggested the woman’s injuries came from the moment she fell over the chair.

In the initial report, police determined the traveler was the aggressor and may have committed assault.

"Out of the 10 years I’ve been traveling professionally, I have never seen that," Shannon said.

FOX 4 reached out to both parties involved. The employee didn't answer.

The woman involved said she hired an attorney and maintains that the employee was the aggressor, but it wasn’t captured on video.

Spirit Airlines said it is cooperating with the investigation and does not tolerate violence of any kind.