A species of blue crab native to the Chesapeake Bay area has wound up on the shores of Europe, spotted everywhere from Ireland to Spain to Albania, and it's threatening both native species and fishermen. 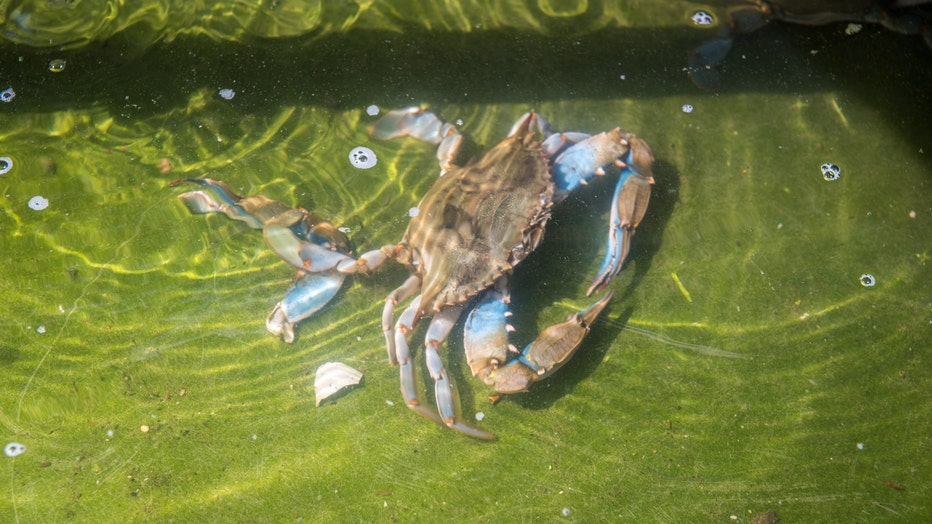 The Chesapeake blue crab or Atlantic blue crab has most recently turned up on the Dollymount Strand in Dublin, according to The Irish Times. The National Biodiversity Data Centre in Ireland says this species is "larger and more competitive than native crabs," and is worried about the environmental impacts.

A citizen science officer with the centre, Dave Wall, told The Irish Times someone most likely released the blue crab discovered in Dublin last month, "thinking they were doing the right thing." However, Wall warns releasing non-native species into different ecosystems can have dire consequences.

This species of blue crab has invaded other parts of Europe and caused huge disruption to the natural ecosystem and food chain and fishermen's livelihoods.

In early 2019, VICE reported on the impact the Atlantic blue crab had on the Mediterranean coast of Spain, saying the species had first been spotted in 2012 and had become an invasive problem ever since.

VICE says scientists can only speculate about how the crabs made their way across the Atlantic, but the reality for fishermen includes destroyed fishing nets and the decline of green crabs that used to call those waters home.

When the species started to appear off the coast of Tunisia, the country's fishermen "compared them to ISIS, because 'they've destroyed everything,'" VICE reports.

In the summer of 2020, Phys.org reported that the blue crab invasion was also plaguing Balkan fishermen on the Albanian coast, saying the species clogs nets, cuts up their hands and arms and diminishes the fish populations they rely on to sell at markets. 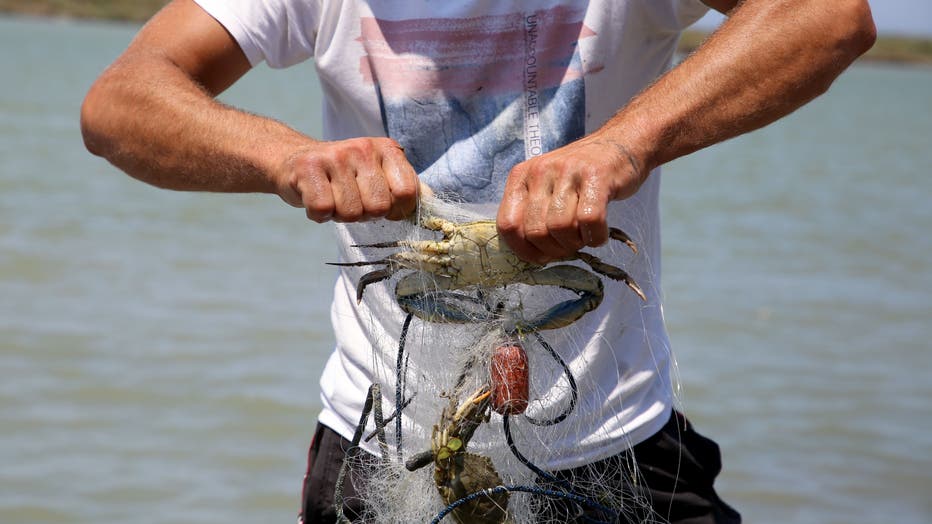 Fisherman Adrian Kola removes blue crabs from his fishing net in the waters of the Dead River (Lumi i Vdekur) in the village of Adriatik near the Divjaka Lagoon on July 24, 2020. - The blue crab's colourful claws are pretty but dangerous: ripping up 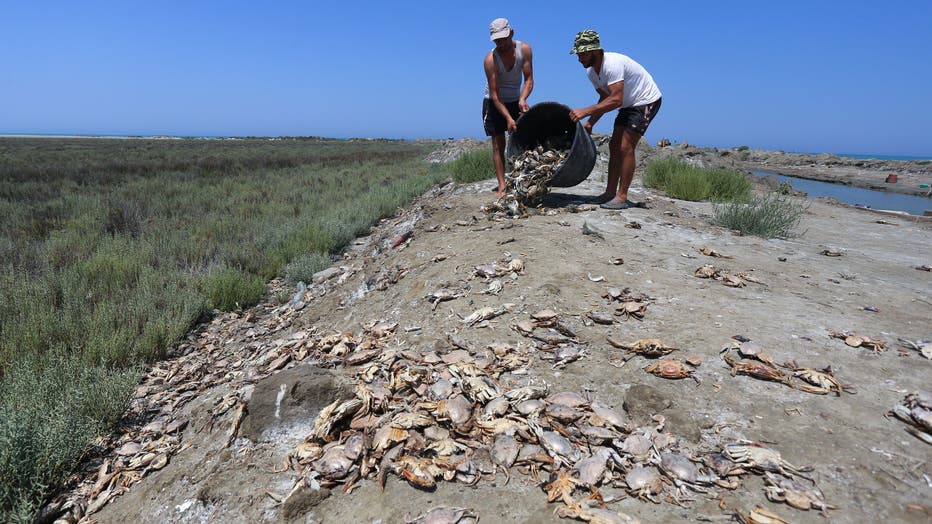 Fishermen throw away crabs at the Dead River (Lumi i Vdekur) bank near the Divjaka Lagoon on July 24, 2020. - The blue crab's colourful claws are pretty but dangerous: ripping up fishing nets and upsetting ecosystems off Albania's coast, the invasive 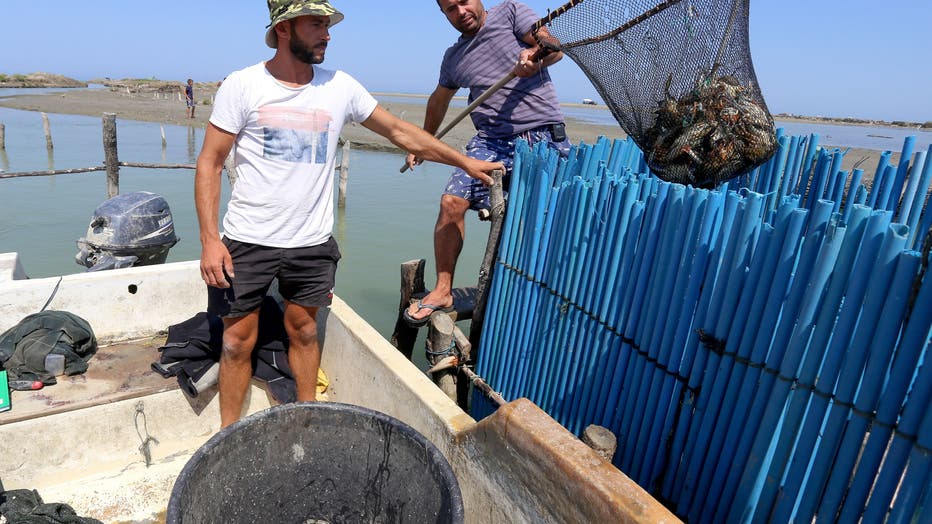 Fisherman Stilian Kishta (R) holds his fishing traps at the estuary of Dead River (Lumi i Vdekur) near the Divjaka Lagoon on July 24, 2020. - The blue crab's colourful claws are pretty but dangerous: ripping up fishing nets and upsetting ecosystems o

Atlantic blue crabs can also lay millions of eggs, which frightens fishermen about the future of the species in their waters. 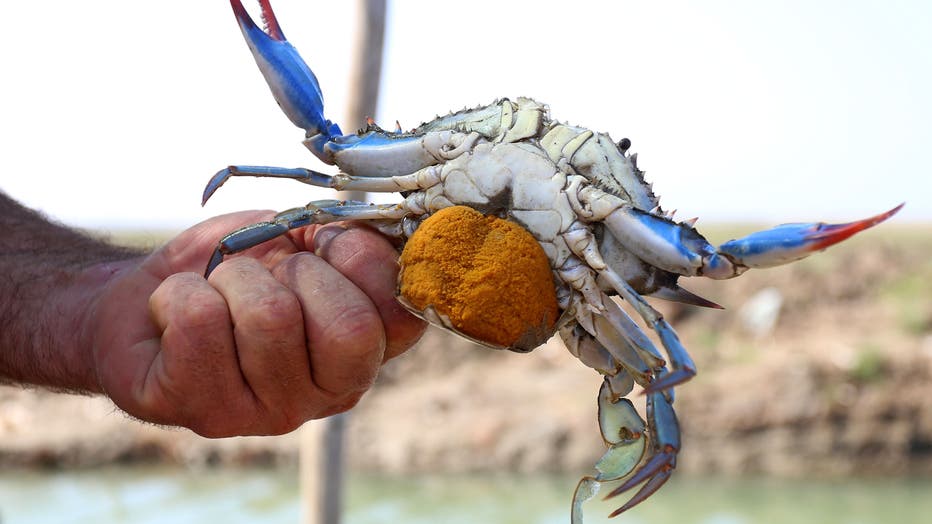 A fisherman shows the eggs of a crab after removing it from his net in the waters of the Dead River (Lumi i Vdekur) in the village of Adriatik near the Divjaka Lagoon on July 24, 2020. - The blue crab's colourful claws are pretty but dangerous: rippi

Wall told The Irish Times that the centre hopes the crab found on Dublin's shore is "something of a one-off" and that it is not believed that the crab has millions of relatives also living on Dollymount Strand.

However, the centre is asking Irish citizens along the coast to alert them if they believe they've seen one of the Atlantic blue crabs, and Wall has this warning for everyone: "...never, ever release a non-native into the wild."