A Loudoun County sheriff’s deputy was under investigation after being accused of Snapchatting with high school girls and hanging out with them while on duty. FOX 5's Lindsay Watts reports on the matter.

LOUDOUN COUNTY, Va. - A Loudoun County sheriff’s deputy was under investigation after being accused of Snapchatting with high school girls and hanging out with them while on duty, according to those familiar with the 2019 investigation.

FOX 5 has obtained photos and videos of the deputy with the teens. There are screen grabs of Snapchats he allegedly sent the girls and pictures of the teens in handcuffs.

The deputy was never charged with a crime and kept his job following an internal sheriff’s office investigation and because of that, FOX 5 has decided not to identify him.

The photos and videos started circulating on social media in the summer of 2019 and a mother who saw them decided to contact the sheriff’s office.

"I couldn’t believe it," said Gretchen, who didn’t want to use her last name.

Gretchen said her own daughter showed her the images. While her daughter had no contact with the deputy, she was friends with the girls who did.

"This police officer was calling himself ‘Papabear’ on the Snapchat," Gretchen said. "It was clearly a picture of him that he had taken and texts that he had sent the girls. Which had maybe disappeared for him, but they had taken screenshots."

FOX 5 spoke to one of the young women in the photos over the phone. She asked not to be identified and said she met the deputy when she and her friends were hanging out at a parking garage.

She said that while on duty, the sheriff's deputy let them sit in his car, use his handcuffs and look up their information on his computer. They added each other on Snapchat, and she and "Papabear" started communicating. She said she was about to turn 16 at the time.

Snapchat screen grabs provided to FOX 5 show a selfie of the deputy in uniform that says, "What’s up bro." Others say, "You guys are fools lol" and "What are you girls up to."

A video depicts two girls in handcuffs at a parking garage with a deputy also visible. Another video taken by one of the girls shows her in the backseat of a parked squad car. A person off camera can be heard asking if he can be put in handcuffs.

Another photo from a different night shows three girls handcuffed together.

Gretchen’s daughter, who also did not want to be named, said the deputy was communicating with several of her friends.

"I think they thought it was funny at first, and they didn’t realize how concerning it actually was," she said. 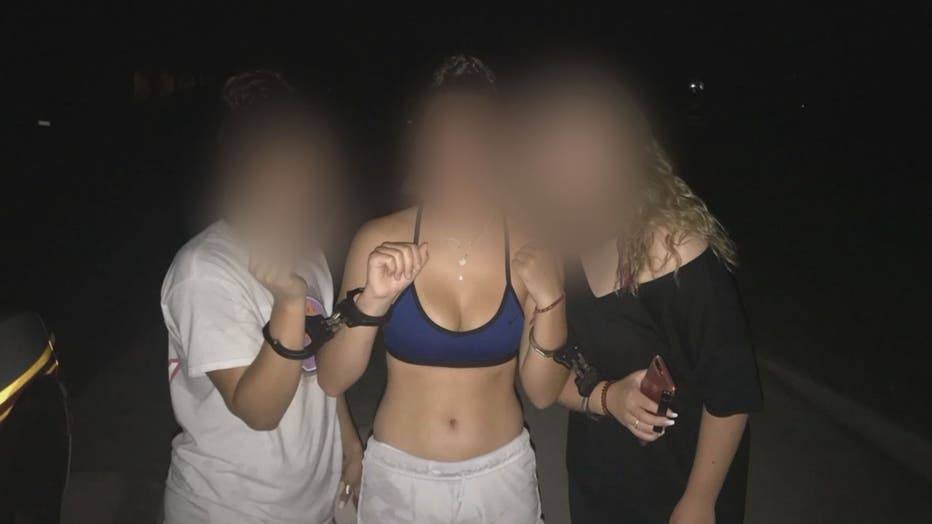 One night at a local pool things went off the deep end, according to those involved with the investigation.

One of the girls who was there and a source familiar with the sheriff’s office internal investigation said it was late at night and the girls had been drinking when the deputy asked them to meet up at a closed community pool. The girls reported that they went swimming in their underwear while the deputy watched. They said he helped them jump the fence, breathalyzed them for fun and drove them home in his squad car.

Gretchen said as a social worker, she is a mandated reporter and had no choice but to contact the sheriff’s office.

"I just decided there’s no way I can live with this and be worried that something worse could happen, that another line could be crossed," Gretchen said. "Because it was very inappropriate."

Gretchen called the sheriff’s office to report what she knew. According to an email FOX 5 obtained through a Freedom of Information Act that documented her call, it was July 4th, 2019.

She said nothing happened until a few weeks later when her daughter and some of the girls involved ended up talking to some other sheriff’s deputies in Purcellville. Her daughter said they mentioned "Papabear" to the deputies.

"We were just talking about the situation, and then I had told them that my mom reported it," she said. "So then one of them pulled me aside and asked, you know, ‘What is this about? What happened? Who did you report this to?'"

FOX 5 requested the deputy’s body camera footage through FOIA, but the request was denied under Virginia FOIA law that prevents the information from confidential law enforcement investigations from being released.

At the end of July, Gretchen said she and her daughter were contacted by sheriff’s investigators who interviewed them about what they knew.

"From then on, I really just thought it had been taken care of," Gretchen said. "I didn’t pursue it further."

The Loudoun County Sheriff’s Office Internal Affairs Unit currently consists of just one person, and when he’s out, internal investigations are conducted by command staff, according to the sheriff’s office. A spokesman said there are two positions in internal affairs, but one is currently open.

Sheriff Mike Chapman makes the final call on whether someone keeps their job after an internal investigation. Chapman spoke to FOX 5, but declined an on-camera interview. He said he can’t speak about specific internal cases. 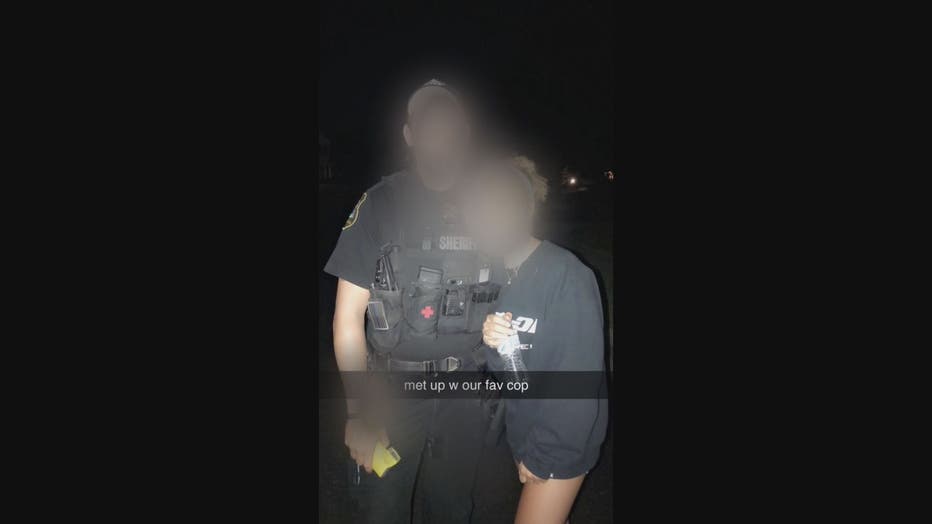 Three years later, the young woman who said she Snapchatted and hung out with the deputy said she realizes how wrong his behavior was.

"Obviously, he’s not a very good cop, and he shouldn’t be a cop," she said.

When told the deputy never lost his job she said: "It’s unbelievable to me."

In an emailed statement LCSO said:

"Any disciplinary action taken as a result of an internal affairs investigation is based on the findings of the investigation. Proposed disciplinary actions are independently reviewed by Loudoun County Government Human Resources staff and the Office of the County Attorney for conformance with Loudoun County Human Resources policy, applicable laws, and LCSO General Orders. All final determinations for discipline are based on these reviews and recommendations of LCSO Command Staff, with final decisions resting with the Sheriff.  This helps ensure fairness and consistency within the process.

"The Loudoun County Sheriff’s Office takes any complaint made against a deputy seriously and all complaints are thoroughly investigated. A half-a-million-dollar independent study by the International Association of Chiefs of Police and initiated by the Loudoun County Board of Supervisors completely reviewed the operations of the agency and found "By all accounts and measures, the LCSO is providing exceptional service to the residents of the county, as measured through multiple performance indicators. The study made no recommended changes to the internal investigative process."

In an email, the deputy involved refused comment, referring FOX 5 to the sheriff’s office media spokesman.

The deputy has been with the department for five years.