CAIR-MN held a news conference on Jan. 11, 2023, about an incident in which a Hamline University professor showed paintings of Muhammad during class.

MINNEAPOLIS (FOX 9) - After a Hamline University professor faced backlash from showing a depiction of the Prophet Muhammad during a classroom lesson, America’s largest Muslim civil liberties organization is saying it does not believe the professor acted with "islamophobic intent" – arguing that academic positions should not be condemned with bigots without justification.

On Wednesday, Jan. 11, Hamline University student Aram Wedatalla – who is also the head of Hamline’s Muslim Student Association – held a press conference with the Minnesota branch of Council on American-Islamic Relations (CAIR-MN), where they together denounced the showing of Muhammad during a course taught by former Hamline adjunct professor Erika Lopez Prater.

"I was extremely hurt by the actions of this professor, and couldn’t bring myself to return to that class ever again," said Wedatalla of the showing at the press conference. "My voice was not heard at all, and I felt ignored, belittled."

Wedatalla said that when she took her concerns to the university, she then felt respected – noting leaders showed "nothing but care" for her concerns

"Islamophobia can root itself in many instances, including the one recently at Hamline University," said Jaylani Hussein, the director of CAIR-MN, during the press conference.

Hussein said that scholars across the world condemn showing imagery of the prophet, while also thanking the university for its leadership and response to the incident.

"It’s important to remember that universities have the right to censure speech that promotes hate or discrimination," Hussein said.

FOX 9 previously covered the national debate the incident has caused, centering around whether it's considered inappropriate for a professor to show pictures of the Prophet Muhammad in class.

But following the press conference and increased attention the incident has received, the national branch of CAIR has released a statement to "explain how CAIR identifies Islamophobia," representing its official position on the incident. 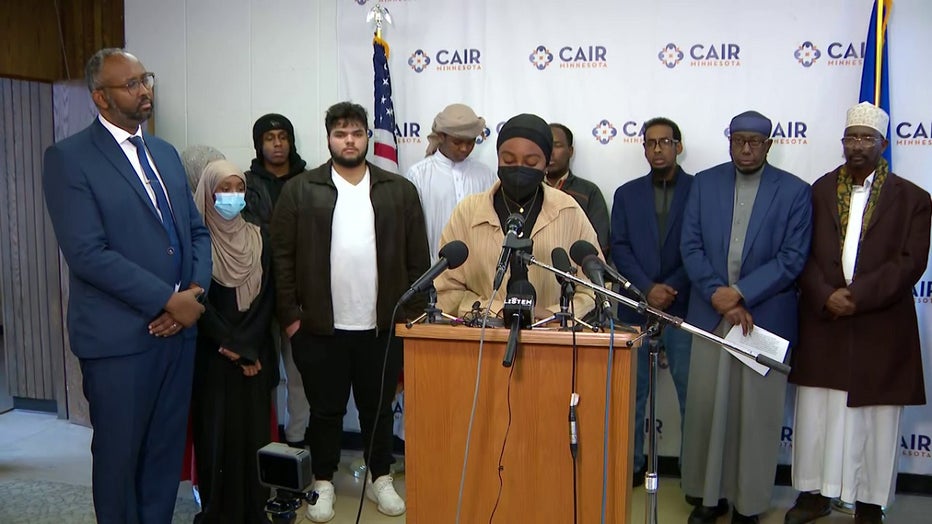 After a Hamline University professor faced backlash from showing a depiction of Muhammad during a classroom lesson, America’s largest Muslim civil liberties organization is saying it does not believe the professor acted with ‘Islamophobic intent’ – a

"Although CAIR never hesitates to call out Islamophobia, we never use the word lightly. It is not a catch-all term for anything that we find insensitive, offensive or immoral," the statement read.

The statement from CAIR went on to note that although many Muslims around the world consider images of the prophet sacrilegious and offensive, "intent and circumstances" matter when determining whether an act is Islamophobic or not.

"Academic freedom is an important principle of the higher education system. Far too often, professors who teach inconvenient facts … face censorship condemnation and even termination. This is wrong," the statement said. "Although we strongly discourage showing visual depictions of the prophet, professors who analyze ancient paintings for an academic purpose are not the same as Islamophobes who show such images to cause offense. Based on what we know up to this point, we see no evidence that former Hamline University professor Erika Lopez Prater acted with islamophobic intent … Academics should not be condemned as bigots without evidence, or lose their positions without justification."

Following the complaints of Islamophobia and insensitivity, Hamline officials decided not to renew Lopez Prater’s contract, effectively ending her employment with the university.

Lopez Prater previously said the university did not contact her prior to sending out an email denouncing her showing the visual as "Islamophobic" to both staff and students, saying a warning that the images would be shown was included in the class syllabus weeks prior. At that point, no one had complained, she says.

Meanwhile, on Friday, the Hamline University Board of Trustees released a statement on the ongoing controversy.

"The Hamline University Board of Trustees is actively involved in reviewing the University’s policies and responses to recent student concerns and subsequent faculty concerns about academic freedom. Upholding academic freedom and fostering an inclusive, respectful learning environment for our students are both required to fulfill our Mission," Ellen Watters, Hamline University Board of Trustee's chair said in the statement.

An incident at Hamline University last semester is sparking conversations all over the country about how to discuss Islamic art. The national debate centers around whether it's considered inappropriate for a professor to show pictures of the Prophet Muhammad in class. For many Muslims, it's against their faith to look upon the images of Muhammad.